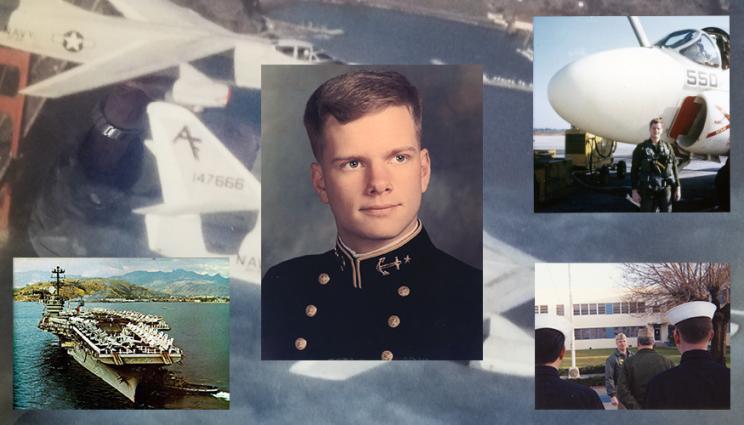 Jerry Mullins’ experience in the Navy led him to his 40+ year career as a senior intelligence analyst in the Global Security Directorate at LLNL. Some of his military highlights are shown here: center, Mullins as a midshipman (1969); upper right, Mullins with an A6A (1970); lower left, USS Saratoga leaving Subic Bay (1973); lower right, Mullins addressing my Navy Reserve command (1992); background, a KA3B aircraft over the Golden Gate Bridge (1988).

LLNL is proud to showcase staff members, who have served in the armed forces or are currently serving, to exemplify the Laboratory’s commitment to veterans and armed forces service members.

Alden F. “Jerry” Mullins has spent his entire professional career in support of U.S. national security. First with his military service in the Navy and now as a senior intelligence analyst in the Global Security Directorate at Lawrence Livermore National Laboratory (LLNL), where he has spent decades performing all-source analysis on existing or potential weapons-of-mass-destruction threats.

Mullins was born in Philadelphia and has fond memories of growing up in Cheltenham Township. His family consisted of his parents and younger sister.

“My father was an electrical engineer, and my mother was a secretary,” Mullins said. “Ambitious but models of rectitude, our parents led us by example. Our neighborhood growing up consisted of row-house apartments arranged in such a way that there were communal areas for playing or socializing," he said. "The baby boom was in full swing and there were dozens of children within a block or so. It was an interesting place to attend high school, as I was sandwiched between baseball hall of famer Reggie Jackson, who was a year older than me, and former Israeli prime minister Benjamin Netanyahu, who was two years younger.”

At 17, Mullins joined the Navy when he became a midshipman at Annapolis on June 30, 1965. “Growing up in the 1950s, I watched all the WWII documentaries on TV and thought airplanes were the coolest thing ever and ships just about tied with them,” Mullins said. “I built aircraft and ship models and read every book in the library I could find about them. Since the Navy had both ships and planes, it was the obvious choice to me regarding where to go after high school.” 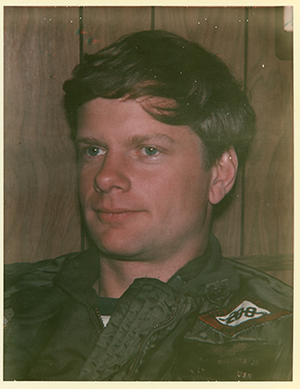 Mullins graduated from the U.S. Naval Academy in 1969 and served seven years on active duty in naval aviation. He received his wings as a Naval Flight Officer and flew in carrier-based jet aircraft in both the Mediterranean and South China seas.

“I made deployments with Attack Squadron 75 aboard the aircraft carrier USS Saratoga to both the Mediterranean and the Western Pacific,” Mullins said. “For shore duty, I taught Navy ROTC at the University of Michigan and — after leaving active duty — I joined the Navy Reserve, navigated 1940s-vintage C118 transports for the rest of graduate school, flew in A3D Sky Warriors from the Alameda Naval Air Station after coming to LLNL and closed out my career in the rank of captain as assistant chief of staff for Plans for Carrier Battle Group 3, which was based in Alameda with one of the nuclear-powered aircraft carriers homeported there.”

In 1979, Mullins earned a Ph.D. in political science from the University of Michigan while continuing to fly in the Navy Reserve. He joined LLNL in 1979 and has worked in Z Program for the majority of the last 43 years.

He spent a year on research leave at Stanford University writing a book published by Stanford Press and spent more than a year on assignment in the U.S. State Department Bureau of Political-Military Affairs. He also continued to serve in the Naval Reserve after joining LLNL, eventually commanding an aircraft squadron at the Alameda Naval Air Station and concluding his career as assistant chief of staff for Carrier Battle Group 3.

Mullins credits the military as having built his confidence and taught him some very important lessons. “The military taught me that I could do more than I had thought I could,” Mullins said. “It taught me that pre-mission anxiety needn’t interfere with mission performance and that the only effective leadership derives from example.”

When asked what the highlight of his military career was, Mullins said that it’s hard to single one thing out. “Flying combat missions over North Vietnam was easily the most intense experience of all, but it also was a highlight to see three classes of ROTC students I had taught embark on their naval careers,” he said. “In addition, having command of the A3 squadron at Alameda was a great honor and the epitome of what I had signed up to be a naval officer for.”

Mullins said that the Lab is a good place to work for veterans. “Like the armed forces, the Lab is mission-focused and driven by national security needs,” he said. “The culture is familiar and supportive in ways that a veteran can relate to. The Lab also supports reservists with liberal military leave for performing reserve duty and often flexible scheduling that make it possible to fulfill reserve service expectations without compromising a civilian career here.”

Mullins said that his military service, in many ways, prepared him for a career at the Lab. “My job is related to understanding foreign threats, and my naval service has given me a good sense of what is useful to the warfighter and what is not,” he said. “In general, the leadership and organizational lessons from military service have been a substantive asset in pulling together and managing project teams here at the Lab.”

While Mullins has dedicated his career to serving the country, he also is dedicated to his family. He and his wife raised four kids, who have kept him busy outside of work.

“At my age, I don’t buy green bananas,” Mullins said. “However, I am working on a couple of projects here at the Lab that are both interesting and relevant to where we are in the world now. On the home front, the four children are grown and off on their own now, so we have filled the space by becoming foster parents. Over the past year we’ve cared for two very young babies with special needs, which has been all-consuming but very much worth the effort.”