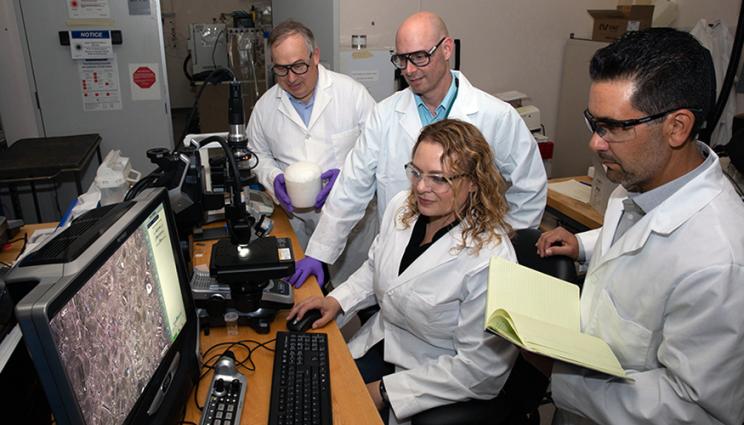 Researchers from LLNL, Shape Memory Medical Inc. and Texas A&M University have developed the IMPEDE embolization plug, a medical device that prevents continued blood flow to diseased vessels. Members of the LLNL team include Jennifer Rodriguez, who is checking a test sample microstructure from a shape memory polymer, while watching are (from left) Tom Wilson, holding a billet of shape memory polymer foam, Ward Small and Jason Ortega. Photo by Julie Russell/LLNL.

A shape memory foam material developed by Lawrence Livermore National Laboratory (LLNL) researchers is the foundation of a lifesaving medical device that has won a national technology transfer award.

Later today, the technology will receive an award from the Federal Laboratory Consortium (FLC) for excellence in technology transfer during the first day of the consortium’s four-day “virtual” online meeting.

The honor will be presented during the FLC’s awards recognition ceremony from 11:40 a.m. to 1 p.m. (PDT).  Registration for the event is free and the ceremony can be viewed here.

To date, more than 400 patients have been successfully treated worldwide with IMPEDE for conditions such as deformed arteries, tumor resections (where blood flow has been blocked to tumors) and pelvic congestion syndrome, with no reported adverse effects.

The foam plug, made of a polyurethane-shaped memory polymer (SMP) and initially intended for weapons applications, is crimped to fit into any diagnostic catheter for easy delivery into a diseased blood vessel. Within minutes, the SMP foam expands to divert blood flow away from the diseased vessel toward healthy vessels.

The foam plug is less likely than metal plugs or coils to tear through blood vessel walls and is easier to navigate through the vascular system. Unlike metal devices, the foam plug degrades over time and is replaced with the patient’s natural connective tissue and collagen, all without long-term inflammation or toxicity.

A porous material, the foam plug offers 100 to 1,000 times more surface area than current technologies to more effectively initiate clotting in the target vessel and divert blood away from at-risk regions.

Pre-clinical studies indicate that this difference leads to better long-term healing with the use of the foam plug, and a lower likelihood that re-treatment — with its associated risks — will be needed.

During licensing for LLNL’s SMP technology, established medical device companies were uninterested in moving away from the industry standard of metal-based occlusion devices.

Driven by a firm belief in the breakthrough advance, the principal investigator of the project, Duncan Maitland, left LLNL in 2007 to join the Texas A&M faculty and create a startup, now known as Shape Memory Medical Inc., to develop vascular occlusion devices using the foam technology.

Technology transfer agreements related to the commercialization of the product also were executed between LLNL and Shape Memory Medical Inc., which is now based in Santa Clara, California.

Another key contributor for the technology transfer is Genaro Mempin, a business development executive in IPO. Hannah Farquar is the Lab’s FLC representative.

Work on the IMPEDE embolization plug technology started more than 20 years ago with a Laboratory Directed Research and Development (LDRD) Director’s Initiative in 1995 (“Development of New Materials and Tools for Minimally Invasive Medical Procedures”), and has been further developed in the interim by another two LDRD grants.

Started in 1974, the FLC is a chartered, nationwide network that helps accelerate the transfer of technologies from federal labs into the marketplace. It is comprised of more than 300 federal labs, agencies and research centers.

Since 1985, LLNL has garnered 37 national awards for technology transfer from the FLC.