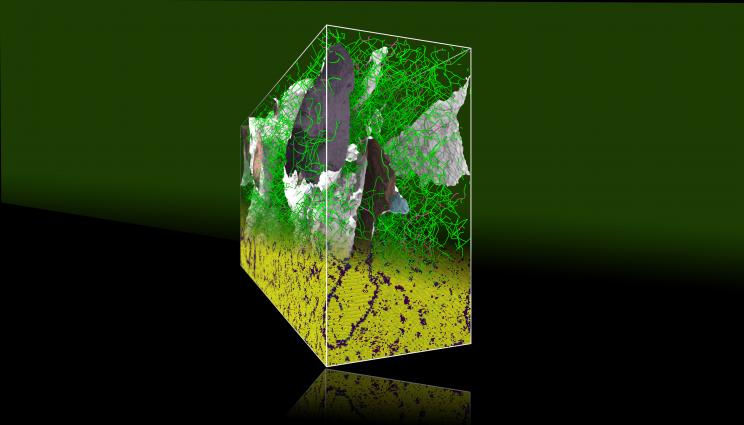 To understand exactly how metals respond to high-rate compression in molecular dynamics simulations, LLNL scientists use novel methods of in silico microscopy to reveal defects in the crystal lattice (green and red line objects and gray surface objects at the top) while removing all the atoms (yellow balls at the bottom) for clarity.

To solve a 100-year puzzle in metallurgy about why single crystals show staged hardening while others don’t, Lawrence Livermore National Laboratory (LLNL) scientists took it down to the atomistic level.

The research appears in the Oct. 5 edition of Nature Materials.

For millennia, humans have exploited the natural property of metals to become stronger or harden when mechanically deformed. Ultimately rooted in the motion of dislocations, mechanisms of metal hardening have remained in the crosshairs of physical metallurgists for more than a century.

The team headed by LLNL materials scientist Vasily Bulatov performed atomistic simulations at the limits of supercomputing that are sufficiently large to be statistically representative of macroscopic crystal plasticity yet fully resolved to examine the origins of metal hardening at its most fundamental level of atomic motion. The simulations were performed on the Vulcan and Lassen supercomputers at Livermore and Mira supercomputer at Argonne Laboratory Computational Facility.

“We relied on a supercomputer to clarify what causes metal hardening, Bulatov said. “Instead of trying to derive hardening from the underlying mechanisms of dislocation behavior, which has been the aspiration of dislocation theory for decades, we performed ultra-large-scale computer simulations at a still more basic level — the motion of atoms that the crystal is made of.”

The team demonstrated that the notorious staged (inflection) hardening of metals is a direct consequence of crystal rotation under uni-axial straining. At odds with widely divergent and contradictory views in the literature, researchers found that the basic mechanisms of dislocation behavior are the same across all stages of metal hardening.

“In our simulations we saw exactly how the motion of individual atoms translates into the motion of dislocations that combine to produce metal hardening,” Bulatov said.

The research was funded by the National Nuclear Security Administration’s ASC program and Technische Universität Darmstadt.