When a body is exposed to a blast, the collapse of tiny bubbles can magnify the damage on brain cell membranes.

Clinical reports and in vivo studies show exposure to a blast can cause TBI, although how the energy is transmitted to the brain is not well understood.

That’s where Livermore researchers come in. Using molecular dynamics (MD) simulations, LLNL physicists Ed Lau and Eric Schwegler, along with University of North Carolina colleague Max Berkowitz, found that ion channels are resistant to damage by shock waves. But with the presence of bubbles, the damage from shock waves is magnified and can contribute to an electrolyte imbalance within cells that can lead to the initial symptoms of TBI, such as headaches and seizures.

When a body is exposed to a blast, shock waves are produced, resulting in shear forces within the cranium. How cells react to shock waves is not well understood.

Cell walls are composed mainly of lipids but contain a large number of proteins that are vital for the normal function of the cell. The team performed all-atom MD simulations on shock-wave-induced bubble collapse to determine its impact on a nerve membrane-bound protein. 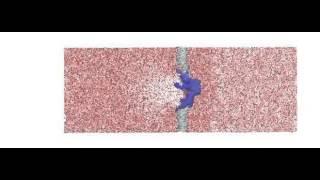 Previous experiments and molecular simulations of bubble-shock interactions have shown that the force generated by bubble collapse is great enough to cause pores to form in membranes, known as poration. These pores likely lead to unregulated ion exchange through the membrane that can lead to a cascade of events that cause injury and ultimately neuronal death.

Ion channel dysfunction in humans is known to be a factor in irregular heartbeats and in diseases such as cystic fibrosis and epilepsy. Molecular simulations have shown that membranes can self-heal from nanometer-size pores in tens of nanoseconds. In this study, the team demonstrated that shock waves alone do not significantly damage membrane-bound proteins (ion channel). But shock-wave-induced bubble collapse can have adverse effects on membrane-bound ion channels even at velocities that are too slow to affect the membrane.

"The damage to the organism from faulty ion regulation can be severe, since, unlike a membrane, ion channels may not self-heal as rapidly," Lau said.

The research appears in the Jan. 5 edition of Biophysical Journal.