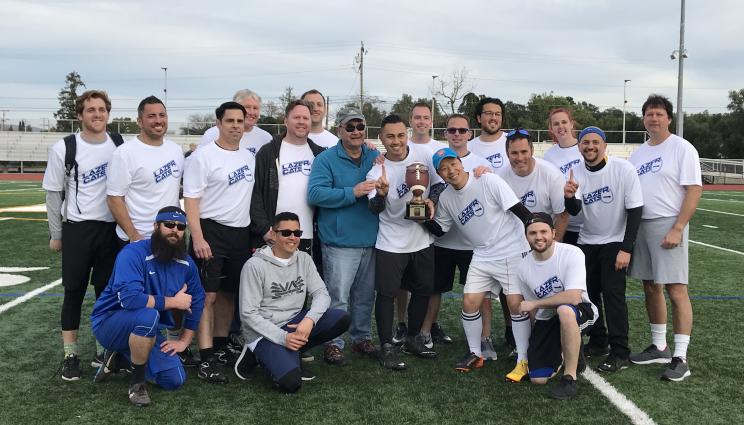 In the battle for nerd supremacy, only one team could rise to the top – and that team was Lawrence Livermore National Laboratory’s (LLNL) Lazer Cats.

LLNL Deputy Director Tom Gioconda kicked off the tournament with a coin toss to determine opening possession and then the teams got down to business.

The first round saw LLNL and SLAC pull into the lead and advance to the championship round. After a break in the action, where LLNL’s U-Jam Fitness Group performed a halftime routine, the teams paired up for the championship and consolation games.

In the end, Livermore’s Lazer Cats proved to be the fittest of them all as they triumphed over SLAC 38-6, taking the Nerd Bowl II trophy. Sandia’s Ballistic Thunderbirds took third place, followed by Facebook’s Cache Money in fourth.

The inspiration for a flag football tournament grew from a group of LLNL employees who play during their lunch break. A tournament presented an opportunity to promote LLNL’s work/life balance and foster camaraderie among Lab employees and between LLNL and other Bay Area national laboratories and private industry tech companies.

"I was blown away by the turnout and the effort everyone gave," said Jason Laurea, Lazer Cats quarterback. "I was really proud that something that started with us throwing the football around at lunch led to the creation of a second Nerd Bowl, which now has its own halftime show. Our group has been playing together for a while and being able to come together and represent LLNL against other national labs gives us a great sense of pride."

The Lazer Cats had nearly 20 players, representing a wide swath of the Laboratory — the National Ignition Facility and Photon Science, Operations and Business, Environmental Safety and Health, Engineering, Computation, the Public Affairs Office (PAO) and Akima. The event also served as a draw for friends, family and even former employees.

George Kitrinos, a longtime Lab graphic designer and photographer (now retired), made the trek from Lodi to volunteer as a referee for the tournament. "As an original founding member of the lunchtime flag football gang, I am so proud to see what PAO and the Lab have turned it into," Kitrinos said. "I’m sure that organizing this tournament is no small feat and the commitment and dedication from players, volunteers and staff is inspiring."

According to Kitrinos, the goal of the tournament — building a rapport — was achieved. "I spoke with many of the players and they all really liked competing, but they also were very interested in meeting and getting to know the other team members," he said. "I think that these events are important because often people only connect online, whereas here they get a chance to make an in-person connection as well."

Click here to watch the championship game between the Lazer Cats and SLAC Attack, prefaced by a video examining the science behind the perfect play. See the photo galleries here: