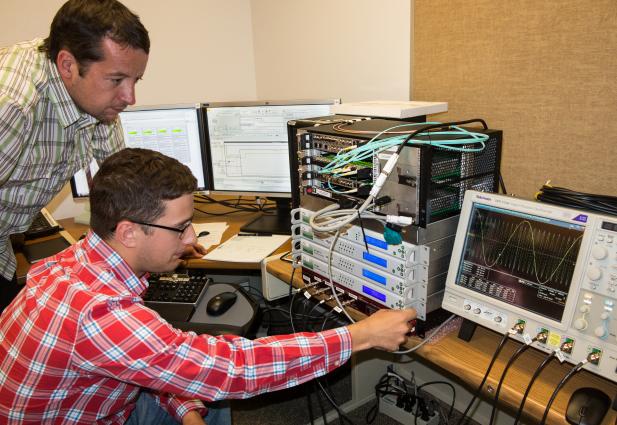 LLNL synchs up with ELI Beamlines on timing system

Nearly a year into the project, much progress has been made, and all contract milestones to date have been delivered on schedule. Under the same agreement, ELI Beamlines delivers various work packages to LLNL enabling HAPLS control and timing systems to interface with the overarching ELI Beamlines facility control system. In a collaborative effort, researchers and engineers from LLNL's NIF & Photon Science Directorate work with scientists from the ELI facility to develop, program and configure these systems.

According to Constantin Haefner, LLNL's project manager for HAPLS, this joint work is vital. "Working closely together on these collaborative efforts allows us to deliver a laser system most consistent with ELI Beamlines facility requirements. It also allows the ELI-Beamlines team to gain early insight into the laser system architecture and gain operational experience," he said.

This summer, that process began. Marc-Andre Drouin and Karel Kasl, control system programmers for ELI, spent three months at LLNL working with the HAPLS integrated control system team. During their time at LLNL, they focused almost exclusively on the ELI-HAPLS timing interface, which allows exact synchronization of HAPLS to the ELI Beamlines master clock.

"The HAPLS timing system must be able to operate independent of the ELI timing system," Drouin said. "But, it also needs to be capable of being perfectly synchronized to ELI. That bridge between timing systems is what we have been working on - making sure HAPLS runs very well independently as well as integrating with ELI."

Haefner pointed out that while HAPLS is a major component, it becomes a subsystem when it moves to the ELI facility. Once at ELI, HAPLS will integrate with the wider user facility, consisting of target systems, experimental systems, diagnostic systems - all of which have to be timed and fed from a master clock.

Kasl likened the master clock to a universal clock used by an office. "We brought the clock here, and now everyone in the office is using the clock to synchronize their work," he said.

The master clock, built by ELI, was programmed as a bridge between the ELI and HAPLS timing systems. During their time at LLNL, Drouin and Kasl worked on configuring that hardware and writing the software that talks to the clock and to the subcomponents that control a very precise sequence of events.

Last week, the ELI team finished their three-month stint at LLNL, but will be back in early fall to continue work - and they're looking forward to it.

"This unit is going to get integrated with our other systems, so there needs to be an overlap between the two teams," Kasl said.

"It's good experience for us to learn about the internal workings of the HAPLS system," Drouin added. "Having this inside knowledge of the most integral parts of the laser is a very big advantage for us in the long run."

Earlier this year, Jack Naylon and Tomas Mazanec, also from ELI, visited LLNL to contribute to the work.