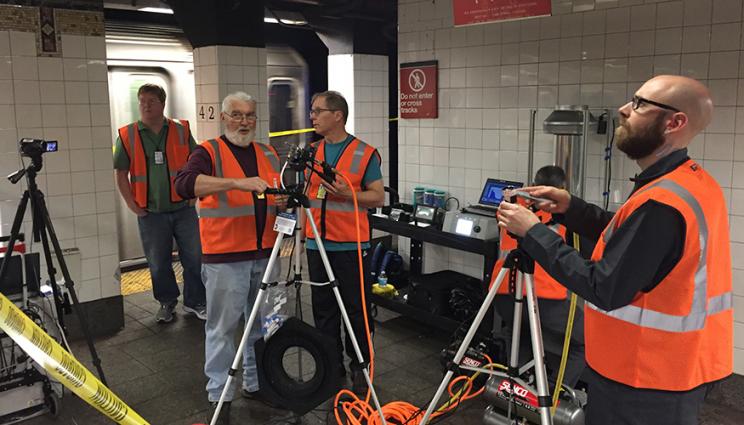 Researchers use a nontoxic aerosol tracker developed at LLNL to study how airborne biological agents might disperse through the New York City subway system.

Lawrence Livermore National Lab (LLNL) researchers took to the New York City subway system May 9-13 to help study how a surrogate for a biological agent, such as anthrax, might disperse throughout the nation’s largest rapid transit system as a result of a terrorist attack or an accidental release.

As part of a multi-agency test sponsored by the Department of Homeland Security Science and Technology Directorate,  led by MIT Lincoln Laboratory with assistance from Argonne National Laboratory, a  LLNL field team spearheaded by Elizabeth Wheeler supervised the release of a harmless DNA-infused aerosol in Grand Central Terminal and two other major subway hubs, and helped collect environmental samples of the particles.

The data recorded during the study will give scientists a better understanding of the spread of airborne contaminants in the subway system and provide first responders with better pre-planning strategies and risk assessment in the event of an emergency, said LLNL’s Associate Program Manager Ellen Raber, who headed the overall effort.

"The goal is to come up with an operational strategy that allows a rapid return to service for underground transportation systems," Raber said. "The transport models being developed will be better informed and we will have predetermined locations in New York where you can quickly optimize sampling locations to understand the extent of contamination. The models will hopefully allow for a better approach to a phased system recovery and limit the time that the whole system would be shut down."

The odorless aerosol spray used for the tests, called DNATrax, is made of a sugar commonly used as a food additive, and a small amount of synthetic DNA generally regarded as safe by the Food and Drug Administration. It was developed at the Lab for evaluation of biological detectors, and has since been licensed to a company that is using it for food labeling purposes and to trace food back to its place of origin.

After releasing the tracer particles over a 20-minute period each day, researchers took particulate and gas samples from more than 50 subway stations, to determine the amount of materials that settled on the ground, inside subway cars and other surfaces. The thousands of samples taken during the tests will be analyzed at LLNL by protocols developed at the Lab and used to validate and improve existing bio-attack models. 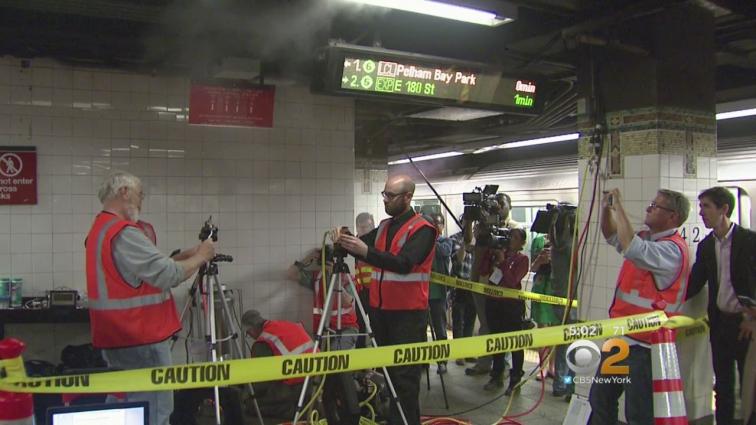 "It is important to test and hone strategies for recovery as much as possible in the operational environment," said Don Bansleben, the DHS S&T program manager. "DHS anticipates the information from these tests will be important to local authorities and emergency management personnel to advance preparedness planning."

The multi-agency tests, supported by the Metropolitan Transportation Agency New York City Transit and other local agencies, were co-funded by the DHS Office of Health Affairs and First Responder Group. The Environmental Protection Agency had a significant role in the effort. The tests were the first comprehensive study of its kind performed on a major subway system during normal operating hours and could have applications to other subways in the future. The DHS-sponsored effort also involved input and research from DOE national laboratories, including Argonne, Sandia, Pacific Northwest, Lawrence Berkeley, and Brookhaven as well as MIT Lincoln Laboratory.

"It was an amazing collaborative effort because of all the different organizations involved," Wheeler said. "It’s always great to see technology developed at the Lab used for such important applications."

LLNL physicist Matthias Frank, who worked with MIT Lincoln Lab on designing and testing the particle release devices and helped characterize the materials used for the study, said he was pleased with the success of the tests and the response by police, government representatives and the general public.

Other Lab employees taking part in the field study were microbiologist Staci Kane and environmental chemist Bob Fischer, who were assigned the nighttime shift, taking samples of the particles from air filters located in the subway cars. Graduate student Cindy Kaeser investigated and optimized the production process to meet the particle size specifications desired by the modelers and helped produce the particle material.

The study is part of a five-year DHS project called Underground Transport Restoration (UTR) and was conducted in accordance with the National Environmental Policy Act.