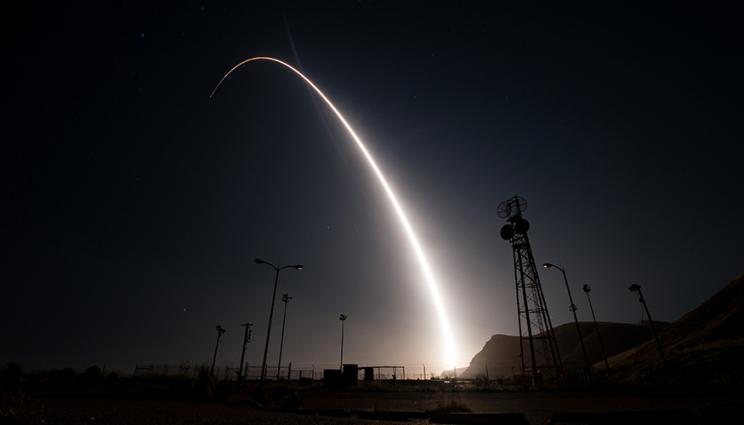 A Minuteman III intercontinental ballistic missile streaks through the night sky carrying a mock W87 warhead during a highly-instrumented flight test. It was one of two such tests that LLNL researchers supported.

As an unarmed Minuteman III intercontinental ballistic missile (ICBM) rocketed into the night sky, a team of Lawrence Livermore National Laboratory (LLNL) researchers listened intently to radio chatter and watched flight data stream in from a control room at the Ronald Reagan Ballistic Missile Defense Test Site. It was the first of two flight tests conducted recently to verify that the system could deliver a payload to target.

The LLNL team was on hand to grade the exercise, using a one-of-a-kind diagnostic suite they developed and fielded to take real-time measurements of the approximately 4,200-mile flight. Within the hour, they delivered diaognostic results to the Department of Defense.  LLNL Flight Test Program Director Steve Jensen said the LLNL fielded diagnostics performed extremely well.

"We consider tests like this an invaluable part of our confidence basis," Jensen said. "It gives us critical information on how the systems respond in real environments."

The tests took place April 26 and May 2, with the ICBMs traveling from their Vandenberg Air Force Base launch site in California to the waters off the Kwajalein Atoll in the Marshall Islands, near the Ronald Reagan Ballistic Missile Defense Test Site.

In addition to scoring tests like this, LLNL researchers are responsible for the W87 thermonuclear warhead that would be the payload for the Minuteman III ICBM, if ever used in a real-world scenario. These flight tests carried a mock payload, but Jensen noted that the data gathered will help his LLNL colleagues validate computer models that are critical to certifying the safety, reliability and effectiveness of the U.S. nuclear deterrent in a post-testing world. This assessment takes place on an annual basis as part of the Stockpile Stewardship Program, culminating in a letter from laboratory directors to the president regarding the current assessed condition of the nuclear stockpile.

"This is the closest we’ll get to fielding a warhead in a test," Jensen said. "LLNL, Sandia and the Air Force all have a significant interest in these tests."

The tests were collaborative efforts between the Air Force and the National Nuclear Security Administration (NNSA), with Lawrence Livermore and Sandia National laboratories, Pantex, Y12 and the Kansas City National Security Campus all playing key roles.