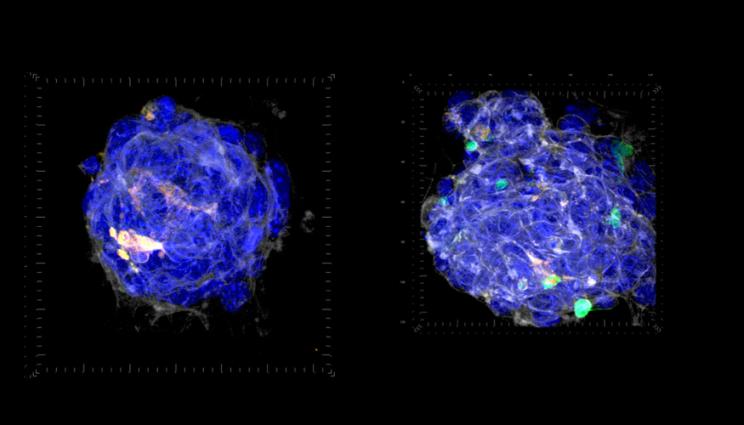 Lawrence Livermore National Laboratory (LLNL) scientists exploring the interaction between cancer cells and the extracellular matrix (ECM) — the “scaffolding” of organs — found that proteins in the ECM can dramatically impact the immune system’s ability to kill tumors. Researchers said the findings, published online in the journal Biomaterials, could represent a novel approach to studying immunosuppression found in many breast cancers and open new pathways of activating the immune system to target cancer.

In the paper, LLNL engineers and biologists report on the development of an assay for testing the efficacy of T cells — the white blood cells that in healthy persons surveil and eliminate precancerous cells. But in most breast cancers, these T cells fail to do their job.

The researchers cultured tumor and immune cells on various compositions of ECM (the molecules and proteins that make up the structural support system surrounding cells). By screening 25,000 cells on 36 different combinations of nine ECM proteins, the team demonstrated, for the first time, the ability of immune cells to clear tumors is regulated by the makeup of the ECM substrate.

“The surprising thing was finding the ability of the immune cell to kill a tumor depends on what [scaffolding proteins] the tumor is sitting on,” said LLNL mechanical engineer Claire Robertson, who led the work. “Depending on the ECM environment, the tumor cells were either completely susceptible and died off or they remained completely resistant to T cells.”

Researchers also discovered that in Collagen IV, T cells turned off gene signatures related to killing harmful cells, whereas tumor cells turned on signatures of cytokines that send messages to T cells that there is no tumor present.

“The question is, what can we do to activate the immune system in these patients? The thing that's really exciting is the fact that we’ve found a completely unique mechanism of immunosuppression. It means we have a whole new way of targeting cancer,” she said.

The work was funded by a Laboratory Directed Research and Development Strategic Initiative (LDRD SI) on tumors and from Robertson’s Lawrence Fellowship. Researchers said the pipeline they developed could apply beyond breast cancer to nearly any form of cancer.

“This research offers a new approach to identify and tease apart the critical components for understanding the biology of tumors, which may provide novel insight for more targeted cancer treatment,” said co-author Matt Coleman, a Translational Immunobiology group leader in the Lab’s Biosciences & Biotechnology Division.

The team’s next step is to determine what drugs can target the interactions between Collagen IV, tumor cells and T cells, with an eventual goal of developing a new therapeutic candidate capable of activating the immune system in breast cancer patients.

“In our LDRD SI, we set out to develop a 3D tumor model platform with the mindset that if you can build something, you truly understand it,” said LLNL biomedical engineer Monica Moya, the Engineering lead on the project. “This work was critical to understanding both how to build systems to ensure cells behave as they would in vivo, but more fundamentally addresses a previously unknown element of T cell biology. We're proud to be using bioengineering to address urgent questions in human health."