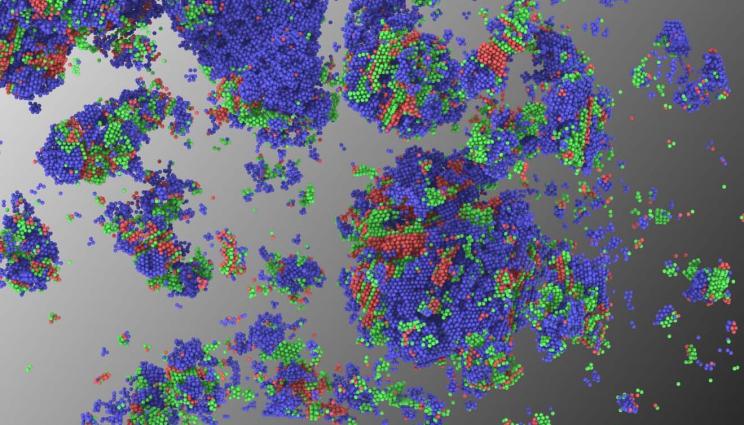 Molecular dynamics simulation of nucleation in undercooled copper, revealing a nucleation pathway that traverses a metastable intermediate phase (body-centered cubic, blue) with subsequent transformation to the lowest free energy phase (face-centered cubic, green) initiated at the interface of the metastable phase and the surrounding liquid (liquid particles were removed from the image, for clarity); further phase competition occurs between the face-centered cubic and hexagonal close-packed structures (red) in the vicinity of the interface.

Since the dawn of civilization, metallurgy has determined the fate of powerful cities, states and empires. Blacksmiths have harnessed the power of heat to melt simple metals that would then be cast into hard, sharp and shiny alloys. Varying process conditions, such as rate of cooling and composition, can lead to new materials with dramatically different mechanical properties, such as ductility, strength or magnetism.

In 1879, Nobel-prize winning physical chemist Friedrich Wilhelm Ostwald discovered that liquids often freeze first into temporary (metastable) structures before converting into their final, most stable equilibrium phase. This so-called  “Ostwald step rule” has been a fundamental mechanism for the study and synthesis of new materials and is a textbook principle that all physicists learn in school.

In recent research published in the Proceedings of the National Academy of Sciences, Lawrence Livermore National Laboratory (LLNL) researchers Babak Sadigh, Luis Zepeda-Ruiz and Jon Belof report on a new mechanism of solidification in copper that provides an atomistic view of Ostwald’s step rule and alters the fundamental understanding of nucleation at high pressure. They found that not only does the crystallization process proceed via a non-equilibrium phase, but that this phase can be kinetically stabilized by the temperature. See the video.

A precise understanding of how this metastable stepping occurs at the atomistic scale has long been a mystery for liquids that have been compressed to high density, such as in the center of planets (as in the solidification of iron that is believed to occur in the center of Earth) or in laboratory experiments. For the first time, LLNL scientists have been able to directly predict from computer simulations, using one of the most powerful supercomputers, the real-world phase diagram of a crystallizing metal in dynamic experiments. The team took into account the mechanism of Ostwald’s step rule at the atomic scale when liquid is compressed to high pressure – with surprising results.

“Kinetic stabilization of metastable phases in rapidly cooled metals and alloys has been established in experiments for decades -- however, atomistic theories that can quantitatively predict the solidification conditions that produce non-equilibrium phases are still at their infancy,” explained lead author Sadigh. ”Using modern simulation methods, we have tried to provide a framework for predicting how process conditions can be manipulated to design completely new materials using both a modern laser platform as well as classical heating in furnaces.”

Simulations of the nucleation process, run on the GPUs of the LLNL supercomputer “Lassen,” reveal that nucleation first occurs through a body-centered cubic phase that is unstable. This is in contrast to the usual view that a metal will nucleate the phase that is most favorable in free energy as typically represented through the phase diagram of a substance, in accordance with the Ostwald rule.

“This result was surprising, because it has forced us to rethink the basis for phase stability at high pressure – under these extreme conditions, such as in the center of Earth, the thermodynamic phase diagram sort of goes out the window in terms of predictive capability and one needs to turn to kinetic phase maps,” said Belof, the project principal investigator for phase transition kinetics and program leader for the Equation of State program at LLNL.

To better explain the new finding, Sadigh developed a modification to classical nucleation theory that includes the metastable phase production. The new nucleation model has been implemented into the LLNL kinetics code Samsa, which is utilized by the hydrodynamic simulation codes for the 3D simulation of high energy density compression experiments.

The research is funded by the National Nuclear Security Administration.