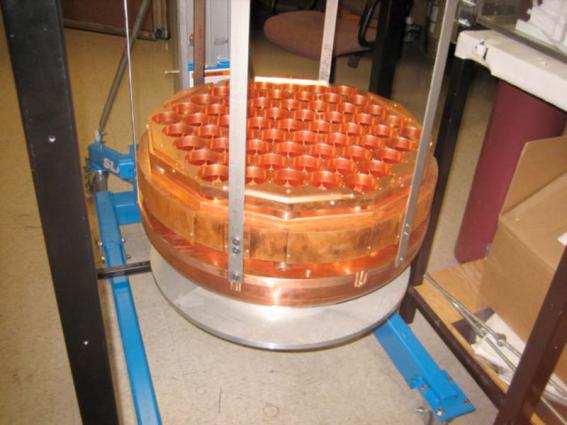 Shown is a side view of the Lawrence Livermore National Laboratory-designed and built copper photomultiplier tube mounting structure, which is a key component of the Large Underground Xenon (LUX) detector, located at the Sanford Underground Research Facility in Lead, S.D. 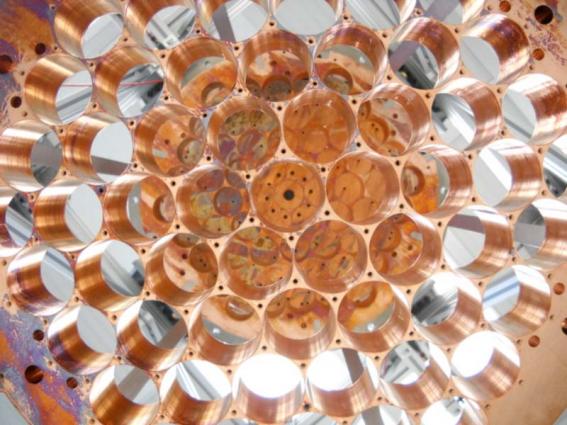 Shown is a top-down view of the Lawrence Livermore National Laboratory-designed and built copper photomultiplier tube mounting structure, which is a key component of the LUX detector.

Lawrence Livermore National Laboratory researchers are making key contributions to a physics experiment that will look for one of nature's most elusive particles, "dark matter," using a tank nearly a mile underground beneath the Black Hills of South Dakota.

The Large Underground Xenon (LUX) experiment located at the Sanford Underground Research Facility in Lead, S.D. is the most sensitive detector of its kind to look for dark matter. Thought to comprise more than 80 percent of the mass of the universe, scientists believe dark matter could hold the key to answering some of the most challenging questions facing physicists in the 21st century. So far, however, dark matter has eluded direct detection.

LLNL researchers have been involved in the LUX experiment since 2008.

"We at LLNL initially got involved in LUX because of the natural technological overlap with our own nonproliferation detector development programs," said Adam Bernstein, who leads the Advanced Detectors Group in LLNL's Physics Division.

"It's very exciting to reflect that as a result, we are now part of a world-class team that stands an excellent chance of being the first to directly and unambiguously measure cosmological dark matter particle interactions in an earthly detector."

The cutting-edge science and technology of rare event detection represented by LUX is of direct interest for LLNL and U.S. nonproliferation, arms control and nuclear security missions, Bernstein noted.

Xenon and argon detectors of very similar design also have excellent neutron and gamma ray detection and discrimination properties, and may assist with missions related to the timely discovery and characterization of fissile materials in arms control and search contexts.

LLNL scientists and technicians have made important contributions to LUX.

Lab staff physicist Peter Sorensen has directed the LUX Analysis Working Group, spent months at the site helping to install the detector and has written numerous peer-reviewed articles on how to perform searches for a range of dark matter candidates using LUX and related detectors.

Fellow LLNL staff physicist Kareem Kazkaz is the author of the LUX detector simulation package, known as LUXSIM, and has directed the Simulations Working Group for the project. The simulation software embodied in LUXSIM is uniquely well suited for low background detectors of this kind, and has been picked up by other users in the dark matter and nonproliferation communities.

LLNL technicians John Bower and Dennis Carr (who is now retired) both played key roles in the manufacture and installation of elements of the LUX detector, including building the precision-machined copper photo multiplier tube mounting apparatus. Lab safety engineer Gerry Mok performed detailed calculations demonstrating the safety of the LUX pressurized and cryogenic systems under a range of possible accident scenarios. His work was important to the successful safety review of the LUX detector.

The Sanford Underground Research Facility (Sanford Lab), located in the former Homestake gold mine, is owned and operated by the South Dakota Science and Technology Authority, with support from the Department of Energy and the DOE's Lawrence Berkeley National Laboratory. The LUX scientific collaboration includes dozens of scientists at 17 research universities and national laboratories in the United States and Europe.

The LUX detector took more than three years to build in a surface facility at the Sanford Lab. In July, a team of researchers, engineers and technicians installed the detector in an excavated cavern 4,850 feet underground. Nearly a mile of solid rock will protect the sensitive experiment from the shower of cosmic radiation that constantly bombards the surface of the earth. Cosmic radiation would drown out faint dark matter signals if the detector were on the surface.

LUX also must be protected from the small amounts of natural radiation from the surrounding rock. That's why the detector, which would just fit inside a telephone booth, was lowered into a very large stainless steel tank -- 20 feet tall by 24 feet in diameter. That tank has now been filled with more than 70,000 gallons of ultra-pure de-ionized water that will shield the detector from gamma radiation and stray neutrons.