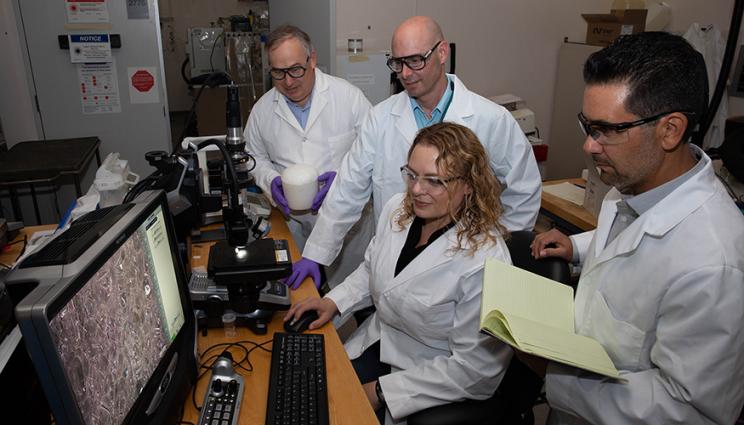 The trade journal R&D World Magazine announced the winners of the annual awards, sometimes called the “Oscars of invention,” in an online post and emails to winners.

The awards will be presented Dec. 5 during the 57th annual program, a black-tie gala at the San Mateo Marriott. With this year’s results, the Laboratory has now captured a total of 169 R&D 100 awards since 1978.

This year’s winners include: Spack, a software package management tool for high-performance computing applications; IMPEDE, a medical device that reduces blood flow to blood vessels outside of the brain to decrease health risks; the Scalable Checkpoint/Restart Framework 2.0 (SCR), a software package that allows high-performance computing simulations to take advantage of hierarchical storage systems; and the MC-15 Portable Neutron Multiplicity Detector, an instrument that can quickly identify and assess nuclear-based threats.

Spack won two awards – an R&D 100 and a special recognition medal in the “market disruptor” category.

Two of LLNL’s four R&D 100 awards – for IMPEDE and the SCR – received internal “seed money” from the Laboratory Directed Research and Development (LDRD) program. This funding enables undertaking high-risk, potentially high-payoff projects at the forefront of science and technology.

“These awards recognize the incredible value our national laboratories deliver in the form of groundbreaking ideas that, if successful, stand to transform how we live our lives,” said U.S. Secretary of Energy Rick Perry. “We are enormously proud of our labs’ ability to continually redefine what’s possible, helping to ensure a more prosperous and secure future for our nation.”

LLNL Director Bill Goldstein noted: “Our talented and dedicated researchers apply themselves to solving some of today’s most challenging problems. These awards serve as recognition that their innovative work has a deep impact on industry, our nation and the world.”

In 2013, Todd Gamblin, an LLNL computer scientist, created the first prototype of Spack to automate the many tedious software builds he and colleagues were forced to perform manually.

Today, Spack is widely available as open-source software. Spack’s original 100 or so packages have grown into a library of more than 3,500, and a large and active community of more than 450 contributors regularly adds features and improvements.

Spack is now used for software deployment on six of the world’s top 10 supercomputers and it has been adopted by a number of HPC centers and software development communities.

Even outside of HPC centers, Spack has had a major impact. It has been picked as an end-to-end development tool within the high-energy physics community, based at Femilab in the U.S. and CERN (the European Organization for Nuclear Research) in Switzerland.

IMPEDE, which has been cleared by the Food and Drug Administration for use in the U.S. and has been cleared for use in Europe, reduces the blood flow through diseased or damaged vessels that can occur in abdominal aortic aneurysm endoleaks, gastric and esophageal varices or blunt trauma.

Continued blood flow to diseased vessels can have major consequences, such as severe pain, excessive blood or even death in the worst circumstances.

To date, more than 250 patients have been successfully treated worldwide with IMPEDE for conditions such as deformed arteries, tumor resections (where blood flow has been blocked to tumors) and pelvic congestion syndrome, with no reported adverse effects.

Work on the technology started at LLNL nearly 20 years ago under Duncan Maitland, who left the Lab in 2007 for Texas A&M University, where he is an associate department head in the Department of Biomedical Engineering.

Using SCR, the input/output performance of scientific simulations can be improved by hundreds of times, with the results produced in significantly less time than they could be with traditional methods.

This is important because HPC applications simulate real-world phenomena that impact people’s daily lives. For example, the results of models that predict the behavior of hurricanes are used by policymakers to make important decisions about where and when to evacuate people. Scientific simulations can require hours, days or even weeks to compute, so delays in obtaining the results can create problems.

Through the years, supercomputers have increased in computing power, largely by increasing the number of processors. The larger scale allows researchers to simulate larger and more complex problems or to compute existing problems much faster. Unfortunately, the larger the scale of the HPC application run, the greater the challenges for input/output.

With traditional methods, documented cases report applications losing as much as half of their run time due to input/output and other problems. With SCR, researchers can get their results without major delays or major code changes.

The instrument, known as the MC-15 Neutron Multiplicity Detector, uses the technique of neutron multiplicity to measure the quantity and determine the arrangement of any special nuclear material (SMN) like plutonium and uranium.

The defining quality of SNM is the ability to sustain a fission chain. Fission chains result when neutrons from one fission bump into other nuclei and induce them to fission.

The neutrons that result from a fission chain come out closely spaced in time. They are correlated in time in much the same way raindrops are correlated in time with thunderstorms. Neutrons from SNM arrive in bursts separated by gaps, where periods of time pass with few or no counts. The characteristics of the SNM can be determined from this pattern of neutron arrival times.

The MC-15 does not simply record that a neutron was counted, but also when. It records neutron detections with a time resolution of 100 billionths of a second, approximately the characteristic time scale of a fission chain. It can operate with count rates of less than one count per second to more than 100,000 counts per second.

The MC-15 is portable, weighs 47 pounds, is superior in a number of ways to previous neutron multiplicity detectors and requires relatively little training to operate.