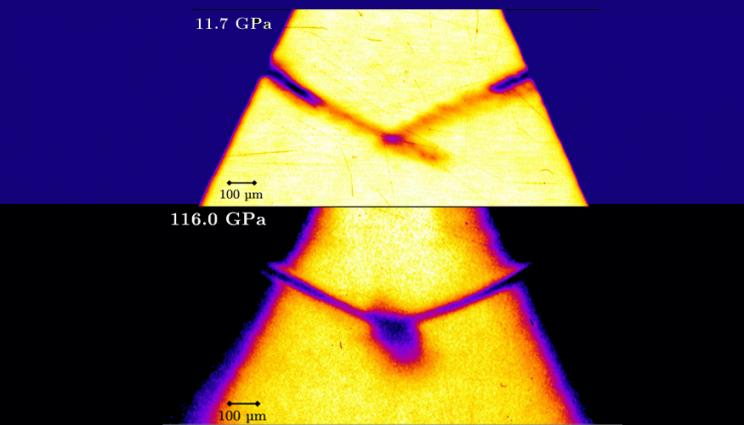 That is, until now. In experiments conducted at the Omega Laser Facility at the University of Rochester’s Laboratory for Laser Energetics (LLE), researchers from Lawrence Livermore National Laboratory (LLNL) have shown for the first time sequences of X-ray radiography images of two interacting tin ejecta microjets.

The work has been published by Physical Review Letters and selected as an Editor’s Suggestion with LLNL physicist Alison Saunders serving as lead author.

“These interactions had never been observed before, and so we didn’t really know what to expect,” Saunders said. “It was surprising to see the lower-density jets from the lower shock pressure pass through each other completely unchanged. This can be thought of as diffuse particle streams passing through each other.”

Saunders said it also was a surprise to see the higher-density jets from the higher shock pressure interact strongly.

“We call that the ‘water-hose experiment’ because it looked like we were spraying two water hoses at each other and watching them splash when they hit each other,” she said.

The team took the first sequence of radiographic images of colliding tin ejecta microjets at two different shock pressures. Ejecta microjets are micron-scale jets of small particles that travel at extreme velocities (velocities in excess of several kilometers per second, or several thousands of miles per hour). The team observed two regimes of interaction behavior as a function of shock pressure. At a shock pressure of 11.7 gigapascals, the jets travel at 2.2 km/s and pass through each other unattenuated, whereas at a pressure of 116.0 gigapascals, the now higher-density jets travel at velocities of 6.5 km/s and interact strongly, forming a corona of material around the interaction region.

“We also use a simplified collisional model in a radiation hydrodynamics code to model the interactions and find that the model is incapable of reproducing the exact interaction behavior we observe, suggesting that more experiments are needed to understand the physics driving ejecta microjet interaction behavior,” Saunders said.

The researchers used OMEGA Extended Performance (EP) with its short-pulse capability to image the jet interactions. Two long-pulse lasers drive shocks into two tin samples which are imprinted with triangular grooves on their free surfaces. As the shocks break out from the free surfaces, the groove features invert to form planar microjets of material propagating toward each other.

At a later time, the EP short-pulse beam incident on a microwire generates a bright burst of X-rays that allows the team to take an X-ray radiograph of the jets as they collide. The X-ray radiograph also provides quantitative information about the jets pre- and post-collision, such as jet densities and particle packing within the jets.

“The work provides the first images of ejecta microjet interactions and with that, raises a lot of interesting questions about the physics dominating the collisional behavior,” Saunders said, adding that tin is a material that is known to melt over the shock pressures explored in this experiment. “We have reason to believe that the lower-pressure jets may contain more solid material than the jets from the high-pressure shock drives.”

Saunders said this begs the question of whether the difference in interaction behavior that was observed between the two cases is a result of the difference in material phase, or other jet characteristics, such as density, velocity or particle-size distributions. The collisions occur with small particles traveling at extreme velocities and involve extremely high strain-rate mechanics.

The team intends to resolve some of the physics uncertainties and understand what is driving the differences that were observed in interaction dynamics: density, material phase, particle-size distributions, elasticity of collisions or a combination of all of these. As a part of that, the team wants to expand the diagnostic capabilities to include different measurements that might be able to measure some of these properties directly.