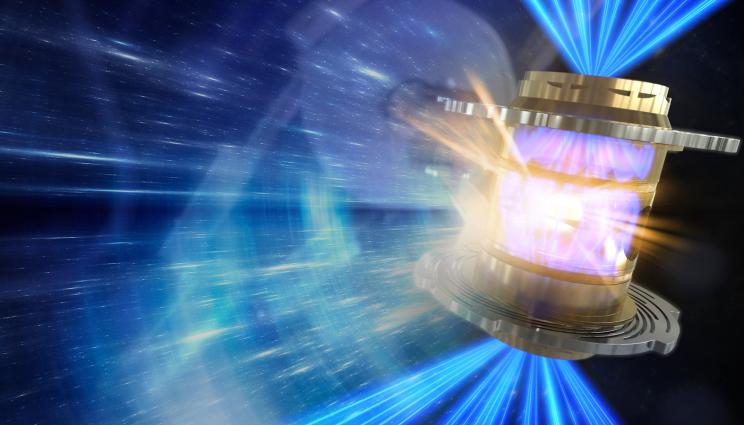 The findings are featured in a new paper in the Nov. 14 issue of Nature Physics and is titled “Evidence for suprathermal ion distribution in burning plasmas.”

The work shows that neutron energy measurements on the high-yield burning and igniting inertial confinement fusion experiments (ICF) showed that the average neutron energy produced is higher than expected for a deuterium-tritium (D-T) plasma that is in thermal equilibrium.

“This implies that the ions undergoing fusion have more energy than expected in the highest-performing shots, something that isn’t predicted — or able to be predicted — by the normal radiation hydrodynamics codes used to simulate ICF implosions,” said Alastair Moore, LLNL physicist and lead author of the paper.

While researchers don’t have a clear understanding of what is driving this observation, it is one of the most direct measurements of the ions undergoing fusion and is not captured by the simulations that are used to understand how to improve ICF implosions and deliver on the Lab’s mission generating a robust and reliable ignition platform.

Moore explains that the measurement described in the paper is a bit like the Doppler shift that results in the change in tone heard when a police car drives past with its siren on.

“In National Ignition Facilty (NIF) implosions, if the deuterium and tritium ions are moving toward the detector when a fusion reaction occurs, we observe a higher energy — or ‘tone’ — neutron from the reaction,” Moore said. “This allows us to diagnose important imbalances in the drive and capsule symmetry that can lead to poor implosion performance because some detectors measure higher average neutron energy than others.”

This also gives researchers a window into how hot the plasma is. For a hotter plasma, the ions are on average all moving faster in every direction, so the deuterium and tritium ions collide at higher velocity and that extra energy is shared among the neutron and alpha particle released by the reaction.

“This means that all detectors measure a higher average neutron velocity; because it is seen in all the detectors we call it an isotropic velocity, but it’s really a measure of the extra energy available when the deuterium and tritium ions collide,” Moore said. “Because of that, it is a direct measurement of the ions that are undergoing fusion.”

For a thermal plasma, there is a fixed relationship between how this extra energy changes for increased temperature.

“What is fascinating about this result is that we found that for DT reactions, NIF implosions exceed this relationship once they start to burn and ignite, indicating that the ions have more energy than expected based on the plasma temperature we measure, which led us to the term suprathermal,” Moore said.

The observation for the research built on the work of many people in the NIF nuclear diagnostics team over the past 5-10 years. Moore said that the work was made possible by the development of state-of-the art, high-precision measurements using the five neutron time-of-flight spectrometers on NIF.

The creation of new Cherenkov nToF detector technology meant that researchers were able to measure velocity with only a 5 kilometer-per-second uncertainty. This is a precision of 1 part in 10,000, without which this effect would not have been observed.

To put this into context, the average energy of the neutrons generated by the DT fusion reaction in ICF means they travel at a rate of more than 51,000 kilometers per second. This is equivalent to traveling from San Francisco to New York in less than a tenth of a second.

The data in the paper was submitted prior to the 1.35MJ result in August 2021 and researchers continue to see exciting results that continue this trend in deviating from expectations as we have moved from burning to igniting experiments.

“One explanation for the result is that the D and T ions are not in equilibrium,” Moore said. “More advanced simulation capabilities are required to better understand this and we are working with collaborators at Los Alamos National Laboratory, Imperial College London and MIT to apply those capabilities to understanding this problem.”