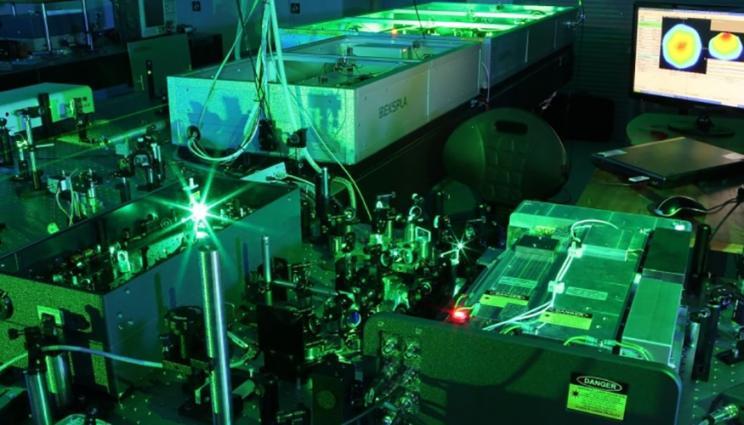 Engineers from Lawrence Livermore National Laboratory and Manteca, California-based Opcondys Inc. have won an R&D 100 award for their development of a light-activated switch that, if fully deployed on the electrical grid, could reduce carbon emissions by more than 10 percent.

The trade journal R&D World Magazine announced the winners of the awards, often called the “Oscars of invention,” during a three-day virtual ceremony — Oct. 19-21 — and on the magazine’s website.

This year’s Livermore R&D 100 awards include a light-activated switch that could cut carbon emissions by more than 10 percent, an instrument that can be used to assess the threat level posed by a suspected nuclear weapon and next-generation workload management software for high-performance computing.

“Our talented researchers dedicate themselves to solving some of today’s most challenging problems,” said LLNL Director Kim Budil. “These awards serve as recognition that their innovative work has profound impact on industry, our nation and the world.”

LLNL engineers and their industrial partner, Manteca, Calif.-based Opcondys Inc., shared a R&D 100 award for the Optical Transconductance Varistor (OTV), a light-activated switch that, if fully deployed, could reduce carbon emissions by more than 10 percent.

The OTV device significantly improves upon existing technologies by maintaining higher output power at higher switching frequencies and shorter pulse widths than is possible with other devices.

The OTV is capable of sending high-voltage, direct-current power along grid lines and switching high voltages up to 10 times faster than today’s solid-state devices, something that could cut energy losses in half to save one billion kilowatt-hours of electricity per year. If widely adopted on the grid, the OTV could eliminate 750 million tons of greenhouse gasses annually by 2050.

Powered by laser diodes, the device is made from silicon carbide crystals capable of blocking at least 10-fold higher electric fields than regular silicon. The LLNL-patented technology is being commercialized by Opcondys Inc.

The instrument, known as the Multiplicity Counter for Thermal and Fast Neutrons (MC-TF), uses the technique of neutron multiplicity to measure the quantity and determine the arrangement of any special nuclear material (SNM), such as plutonium and uranium.

The defining quality of SNM is the ability to sustain a fission chain. Fission chains result when neutrons from one fission bump into other nuclei and induce them to fission.

A neutron multiplicity counter like the MC-TF does not simply record that a neutron was counted but also when. This pattern can provide a great deal of information about SNM size and configuration.

LLNL physicist Sean Walston collaborated on the development of the MC-TF instrument.

A software that manages workloads

Flux maximizes scientific throughput by assigning the scientific work requested by HPC users — also known as jobs or workloads — to available resources that complete the work, a method called scheduling.

A job is typically expressed in a script that contains a formal specification for resource requests, identifies applications (for instance, multi-physics simulation software to run simultaneously across resources) along with their input data and environment and describes how to deliver the output data.

Modern scientific computing campaigns contain numerous interconnected and dependent tasks with disparate resource requirements. The composition of these numerous interdependent tasks can be spread across many jobs, as well as within each job, and is often referred to as a scientific workflow (as distinct from a single job or workload).

Assigning resources to such modern workflows requires highly scalable scheduling as well as performance communication and coordination across hundreds of thousands of jobs, which could not be accomplished with traditional HPC schedulers. Flux solves this critical problem and has provided innovative solutions for modern workflows for many scientific and engineering disciplines, including COVID-19 modeling, cancer research and drug design, engineering and design optimization and large artificial intelligence workflows.

Workload management software such as Flux is critical for HPC users because it enables efficient execution of user-level applications while simultaneously providing the HPC facility with tools to maximize overall resource utilization.