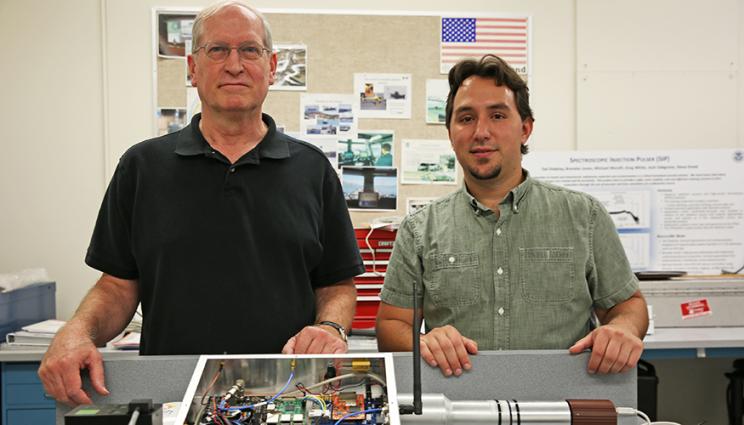 The trade journal R&D Magazine announced the winners of the annual awards, sometimes called the "Oscars of invention," Friday at the Walt Disney World Swan Resort in Orlando, Florida. With this year’s results, the Laboratory has now captured a total of 165 R&D 100 awards since 1978.

This year’s winners include the Lawrence Livermore Microbial Detection Array (LLMDA), a technology that can detect thousands of viruses and bacteria within 24 hours; the Radiation Field Training Simulator (RaFTS), an instrument that replicates the physics of real-world use in radiation hazard-level situations; a new Aluminum/Cerium (ACE) alloy that offers superior mechanical properties; and geometrically enhanced photocathodes that improve high-energy efficiency in X-ray detectors.

Livermore’s other winning technologies are for its role in the National Risk Assessment Partnership (NRAP) that has developed a computer software package to assess the environmental risk of geologic carbon dioxide storage sites; for its part in the development of an advanced hydrogen gas safety sensor; and for its work in the Earth System Grid Federation (ESGF) system that has transformed earth data into community resources for climate centers.

One of LLNL’s seven R&D 100 awards -- for the LLMDA -- received internal "seed money" from the Laboratory Directed Research and Development (LDRD) Program. This funding enables the undertaking of high-risk, potentially high-payoff projects at the forefront of science and technology.

"I am delighted that the Laboratory has received this recognition through the R&D 100 awards this year," said Patricia Falcone, LLNL’s deputy director for Science and Technology. "Our Lab has once again been recognized for the innovations we deliver that benefit the nation." 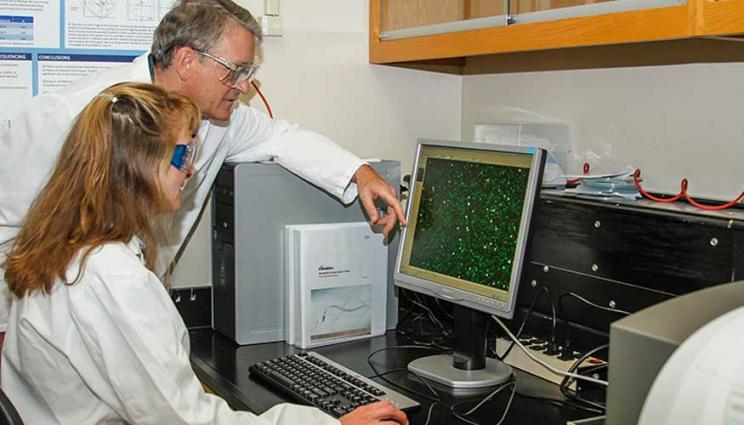 In 2010, a team of LLNL researchers unveiled a versatile biological detection system -- the Lawrence Livermore Microbial Detection Array (LLMDA) -- that could detect any of nearly 3,000 bacteria or viruses, all within 24 hours.

Through the years, the usage and capabilities of the LLMDA have grown substantially.  In addition to bacteria and viruses, the technology can detect fungi, protozoa and archaea, and a total of about 12,600 microorganisms, including almost 1,000 that cause disease in humans.

The LLMDA has spawned more than 40 worldwide collaborations with research institutes, universities, cancer centers, pharmaceutical companies and even a zoo. Its results have been utilized in more than a dozen scientific papers.

Among its applications, the LLMDA has been deployed to check the purity of an infant vaccine; to detect bacterial pathogens in the wounds of U.S. soldiers injured in Iraq and Afghanistan; to help identify diseases in the commercial swine industry; to detect a virus in bladder cancers, and to identify human bacterial pathogens from 14th-century archaeological remains.

The LLMDA has been licensed to Waltham, Massachusetts-based Thermo Fisher Scientific, a company that developed the Applied Biosystems Axiom Microbiome Array, which is available in 96- and 24-sample formats, and has helped reduce sample costs more than tenfold.

The Axiom Microbiome Solution enables the detection of microbes on a sample level. The solution includes the Axiom Microbiome Array, Axiom assay reagents and the Axiom Microbial Detection Analysis Software. The flexible array formats contain sequences for about 12,600 species that have been identified and deposited into the National Center for Biotechnology Information archive.

One of the Lab’s collaborators, a Kansas State University professor of diagnostic medicine and pathobiology, calls the LLMDA the "everything test. It’s really the future of diagnostics for both humans and animals."

Livermore scientists and engineers have developed an instrument that can provide far more realistic training for first responders protecting against attempts at radiological or nuclear terrorism or preparing to respond in the aftermath.

Dubbed the Radiation Field Training Simulator (RaFTS), the instrument produces a response in the actual equipment, such as radiation detectors used by emergency personnel, that exactly replicates all the physics of real-world use in radiation hazard-level situations. The presence of actual radioactive sources is not needed, yet trainees can experience all the realities of operating against such hazards.

RaFTS is an externally mounted device that directly interfaces with the circuitry of operational radiation detection systems. The RaFTS outputs are of sufficient quality that the detection instrument behaves exactly as it would against real radioactivity, producing realistic data suitable to identify sources, their intensity and location/distribution.

Current training is considered inadequate by some because it does not allow for the simultaneous use of the first responders’ actual radiation detection gear against scenarios such as those involving high-hazard-level radiation sources that would be encountered in a radiological dispersal device.

Attempting to use actual radioactivity, in addition to being hazardous, requires an on-site health physicist, a federal license and even security guards to ensure that the radioactive source is controlled. The use of RaFTS enables training against realistic radioactive and nuclear threats, with users’ actual equipment in their home area. While demonstrated for operational radiation detection instrumentation, the concept applies broadly to many different hazards. See image at top. 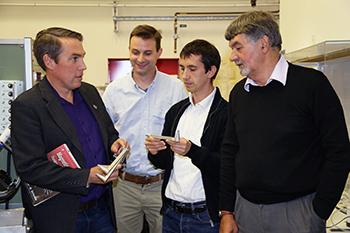 LLNL researchers, working closely with partners at Oak Ridge National Laboratory, Ames Laboratory and Eck Industries, have discovered a new family of aluminum alloys that offers superior mechanical properties over standard aluminum at high temperatures. The new alloy has the potential to lower manufacturing costs compared with most other standard alloys, while also creating a new market for the rare earth metal cerium.

First developed as a project within the Critical Materials Institute (CMI), a Department of Energy Innovation Hub, the motivation for the work was to find a demand for cerium, which is overproduced and generally redeposited back into mines as a part of regular mining operations. Creating a demand for cerium, which typically constitutes about 50 percent of the rare earth content, may sharply improve the economic viability of rare earth mining.

When combined with aluminum, researchers found the Aluminum/Cerium (ACE) alloy performed roughly two-to-three times better than standard aluminum alloys at higher temperatures, showed excellent castability, had higher corrosion resistance than standard aluminum, and perhaps most importantly, eliminated the need for heat treatment after casting, which could reduce manufacturing costs by up to 60 percent, saving energy and time.

The discovery could change mining economics and has the potential to transform how mines operate if the demand for the material goes up. It also could prove useful in making lightweight engines for light planes, automobiles and motorcycles, as well as for associated engine components such as turbochargers. It has been deployed for impeller blades in small-scale hydroelectric generators, as well as pistons for high-performance gasoline and diesel engines. 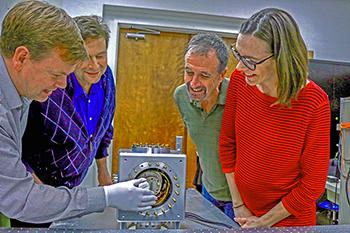 Photocathodes -- photoemissive material that emits electrons when exposed to light or other radiation -- are used to convert incident light photons into electrons. X-ray detector efficiency and performance have been largely limited by the total quantum electron yield, with a quantum efficiency rate of approximately 1 percent.

By changing the geometry of the photocathodes, that barrier has been broken, achieving quantum efficiencies of three times that of traditional photocathodes.

This breakthrough is adaptable to any X-ray detector, allowing for ease of use without compromising performance parameters. 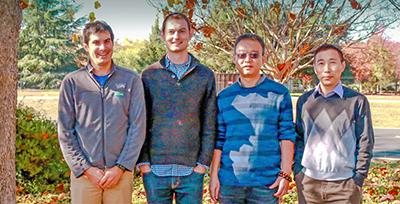 LLNL researchers are part of a five-way U.S. Department of Energy national laboratories collaboration known as the National Risk Assessment Partnership (NRAP) that has developed and released a computer software package to assess the environmental risk of geologic carbon dioxide storage sites.

Known as the NRAP Toolset, the package of 10 science-based computational tools supports industry and regulatory agencies as they design and implement safe and effective geologic carbon storage projects to sequester large volumes of human-made carbon dioxide.

Together, these 10 tools represent the most complete suite of models ever assembled to assess the geological integrity and environmental risk of carbon dioxide storage sites by quantifying potential fluid leakage and ground motion.

NRAP has been designated by the Carbon Sequestration Leadership Forum (CSLF) as a CSLF-recognized project because of the partnership’s toolset.

Geologic formations found deep underground offer promising repositories for safe and effective storage of large volumes of carbon dioxide. However, unlike engineered reactors in surface operations, geologic systems are inherently variable and often poorly characterized, making it difficult to know with certainty how a system will respond to large-scale injection and storage of carbon dioxide.

Livermore researchers assisted with the development of three of the partnership’s 10 tools – the NRAP Integrated Assessment Model for Carbon Storage, the Aquifer Impact Model and the Short-Term Seismic Forecasting tool. 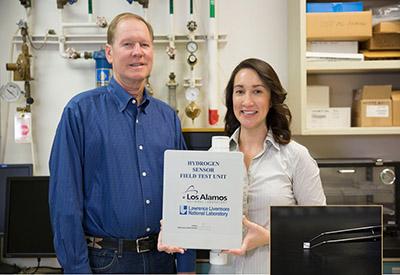 One of the principal drawbacks to the widespread use of hydrogen as a fuel for cars is perceived safety, especially when a consumer fills up a car at a "hydrogen station."

None of the currently commercially available hydrogen sensors fully meets the U.S. Department of Energy requirements for hydrogen refueling stations and onboard vehicle applications, according to the Hydrogen Safety Sensor Testing Laboratory at the Golden, Colorado-based National Renewable Energy Laboratory.

Based upon years of laboratory and field testing, the zirconium oxide electrochemical hydrogen sensor platform developed by LLNL and LANL researchers has shown great promise for meeting all the requirements for such sensors stipulated by the United States and Europe. When commercialized, the sensor is expected to cost $10 or less and its principal, near-term use would be at filling stations around the world.

The new hydrogen safety sensor has undergone field trials at Hydrogen Frontier’s fueling stations in Burbank and Chino for more than two years, with very little interference from other gases in tests and no false alarms recorded.

Hydrogen is starting to grow as a fuel for cars, with fueling stations opening in San Francisco and Los Angeles and major car manufacturers such as Honda, Hyundai and Toyota producing models that use hydrogen fuel cells for power. California hopes to have 50 hydrogen filling stations open to the public by the end of 2017.

Among the functions that the new hydrogen sensor can perform are: indicating if there is an accidental hydrogen release, triggering mitigation strategies to prevent hazardous situations and autonomously shutting down the system. 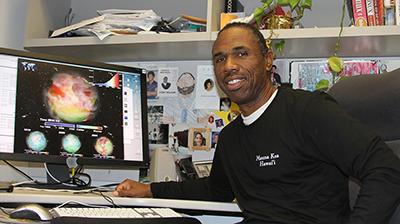 The Earth System Grid Federation (ESGF) peer-to-peer (P2P) enterprise system has transformed earth data into community resources available within a virtual, collaborative environment that links climate centers and users around the world to models and data via a computing grid powered by the world’s supercomputing resources and the internet.

With its collection of independently funded national and international projects, ESGF manages the first-ever decentralized database for accessing geophysical data at dozens of federated sites.

ESGF provides a cohesive functional system that allows equal access to large disparate datasets that otherwise would have been accessible with great difficulty, if at all, to some researchers. Through team efforts, ESGF’s essential infrastructure enables scientists to evaluate models through a common interface, regardless of the data’s location.

Led by LLNL, other collaborators also include: the National Aeronautics and Space Administration, the National Oceanic and Atmospheric Administration; the international laboratories in the federation include the Australian National University’s National Computational Infrastructure, the German Climate Computing Centre, the Institut Pierre-Simon Laplace, the Centre for Environmental Data Analysis, and the Centre de Recherche Informatique de Montréal.