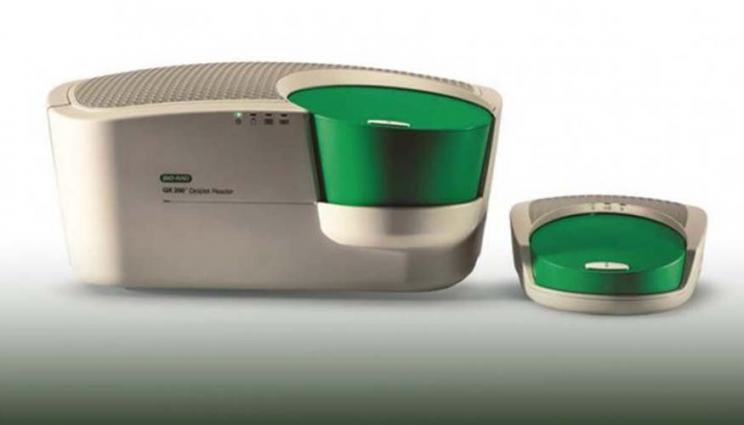 An analytical technique – known as Droplet™ Digital Polymerase Chain Reaction (ddPCR) – that was developed by LLNL scientists and engineers, has garnered an Impact Award from the Federal Laboratory Consortium. The technology has been commercialized by Bio-Rad Laboratories.

The trio of awards, from the Federal Laboratory Consortium (FLC), represent the most national awards that LLNL has ever won in one year’s competition over the past 36 years.

Two of the awards will be given for technologies to assist in the fight against COVID-19. One employs polymerase chain reaction (PCR) technology to diagnose the SARS-CoV-2 virus (the virus associated with COVID-19) and the other is a mechanical ventilator easily built from readily available parts to assist those suffering from Acute Respiratory Distress Syndrome. The third technology is for a radiation simulation tool to greatly improve the realism of training for emergency responders.

LLNL’s researchers and the business development executives from the Lab’s Innovation and Partnerships Office will be honored Thursday, April 8, during the last day of the consortium’s three-day “virtual” online national meeting.

The FLC awards ceremony will be held from 11:30 a.m. to 1 p.m. Pacific time. Registration for the event is free and the ceremony can be viewed here.

LLNL researchers will be recognized with an Impact Award for the commercialization of an analytical technique originally developed to combat bioterrorism but now used in detecting diseases such as COVID-19.

The Impact Award, given to “laboratories whose technology transfer efforts have made a tangible and lasting impact on the populace or marketplace,” will be shared with Bio-Rad Laboratories, Inc., based in Hercules, California. This is the second year the FLC has presented its Impact Award.

About 15 years ago, a team of LLNL scientists and engineers developed the analytical technique – known as Droplet Digital Polymerase Chain Reaction (ddPCR) — for the Lab’s mission in national biosecurity.

Unlike other conventional PCR techniques, the ddPCR approach allows each sample to be partitioned into tens of thousands of droplets, each of which can be independently amplified. In effect, ddPCR enables thousands of data points from a single sample, which leads to higher precision, accuracy and sensitivity.

LLNL’s ddPCR technique was patented and licensed co-exclusively to two companies, which were both later acquired by Bio-Rad.

In May 2020, Bio-Rad’s SARS-CoV-2 Droplet Digital PCR test kit received emergency use authorization from the U.S. Food and Drug Administration (FDA) for screening upper respiratory samples in patients with a low viral load of SARS-CoV-2.

The test’s high degree of sensitivity makes it more effective than other PCR tests for identifying individuals in the early stages of infection, for detecting minimal residual disease in people recovering from COVID-19 or for detecting the virus in more difficult sample types like saliva.

This effort was primarily supported by the Department of Energy (DOE) Office of Science through the National Virtual Biotechnology Laboratory, a consortium of DOE national laboratories focused on response to COVID-19, with funding provided by the Coronavirus CARES Act.

As the COVID-19 pandemic surged and concern emerged over a potential nationwide shortage of ventilators, LLNL researchers began designing a durable, portable mechanical ventilator to help fill the gap.

A group of approximately 20 engineers and scientists began prototyping a ventilator that could be made from non-traditional parts, preventing further stress on the already-strained supply chain.

In just over three months, LLNL and BMI designed, produced and tested an easily reproducible design prototype while partnering with manufacturing facilities and gaining FDA authorization for the device’s emergency use.

This collaboration was largely done remotely, with scientists, engineers and medical experts contributing from home offices, in many cases, due to shelter-in-place orders.

While industry partnerships forged in cooperative research and development agreements (CRADAs) often take years to deliver a commercial product, particularly a medical device, the LLNL/BMI CRADA produced the SuppleVent™ emergency ventilator — FDA-cleared for use and approved for sale — in just a few months.

Genaro Mempin is the business development executive who has handled the technology transfer work, including a CRADA, for the ventilator project, with assistance from Alicera Aubel, an agreements specialist in the Innovation and Partnerships Office.

LLNL researchers and Business Development Executive Annemarie Meike, along with Argon Electronics of the United Kingdom, have been recognized with an Excellence in Technology Transfer award from the FLC.

Livermore and Argon researchers have developed an instrument that can eliminate the need for radiation sources in training while providing far more realistic training for first responders who protect against attempts at radiological or nuclear terrorism or respond in the aftermath.

Dubbed the Radiation Field Training Simulator (RaFTS), the instrument produces a response in the actual equipment, such as radiation detectors used by emergency personnel, that exactly replicates all the physics of real-world use in radiation hazard-level situations. The presence of actual radioactive sources is not needed, yet trainees can experience all the realism of operating their most sophisticated instruments against such hazards.

RaFTS is an externally mounted device that directly interfaces with the circuitry of operational radiation detection systems. The RaFTS outputs are of sufficient quality that the detection instrument behaves exactly as it would against real radioactivity, producing realistic data suitable to identify sources, their intensity and location/distribution.

Current training is considered inadequate by some because it does not allow for the simultaneous use of the first responders’ actual radiation detection gear against scenarios such as those involving high-hazard-level radiation sources that would be encountered in a radiological dispersal device.

The use of RaFTS enables training against realistic radioactive and nuclear threats, with users’ actual equipment in their home area. While demonstrated for operational radiation detection instrumentation, the concept applies broadly to many different hazards.

Started in 1974, the FLC is a congressionally chartered, nationwide network that helps accelerate the transfer of technologies from federal labs into the marketplace. It is comprised of more than 300 federal labs, agencies and research centers.