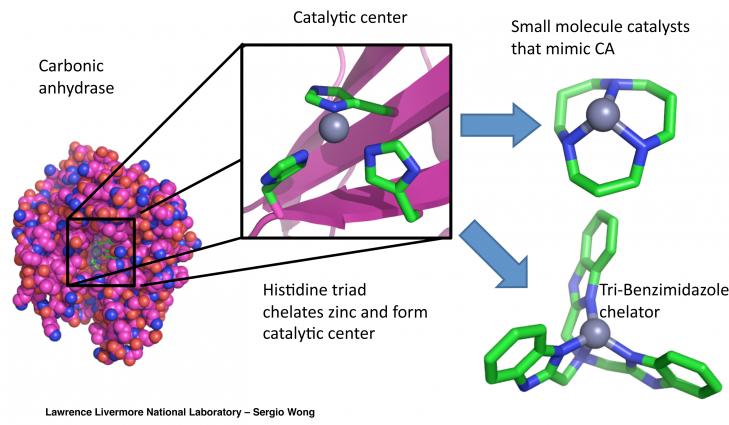 Lab researchers are working to replicate the enzyme — carbonic anhydrase — so that it can be used to speed up the absorption of carbon dioxide in the industrial field. Image by Sergio Wong/LLNL. Click here for

With more than $3.6 million in Recovery Act funding, LLNL researchers, in partnership with the University of Illinois and Babcock & Wilcox, will develop synthetic small-molecule catalysts that greatly speed the absorption of carbon dioxide (CO?) into liquid solvents that enable them to bind CO? less tightly and reduce the energy required to release the CO? from the solvent afterward.

This will open up a new range of process conditions and methods for industrial CO 2 capture, ranging from near-term improvement of existing processes to new capture technologies in the longer term.

The team is replicating one of the fastest enzymes known — carbonic anhydrase — which is important in the human body. This enzyme speeds up the rate in which CO 2 sub is hydrated.

"It’s the reason you can breathe," Aines said. "We’re making small molecules that perform that same function but that can survive in an industrial process where an enzyme is food. They speed up the reaction."

The catalysts have already been developed in the biomedical field but need to be enhanced to provide industrial robustness against thermal and chemical degradation.

The work will combine LLNL’s scientific experience in creating synthetic small-molecule catalysts with Babcock & Wilcox’ industrial experience and testing to design, synthesize and demonstrate use of the catalysts in both existing and new CO 2 -capture systems.

The three-year project received $3.6 million in funding from DOE’s Advanced Research Projects Agency-Energy (ARPA-E), and Babcock & Wilcox will supply their own research and testing costs.

Under the first year of a Laboratory Directed Research and Development project, the team is developing the catalysts for this CO? function. The ARPA-E funding will move the project even further out to industry.

"This project supports ARPA-E’s goal to have a transformational impact on dramatically lowering the energy and cost penalties associated with carbon capture, and in the long run, reduce the problem of energy-related emissions of greenhouse gases," Aines said.

The Laboratory’s computational tools will be used to test catalyst designs to ensure long-term stability — structural stability and preservation of the metal ion in the catalytic pocket. This testing is typically a slow, arduous process, but with LLNL’s supercomputers, the team will be able to test hundreds of candidate compounds, produce dozens for bench testing and in only two years be ready for long-term stability tests in large-scale testing facilities, Aines said.