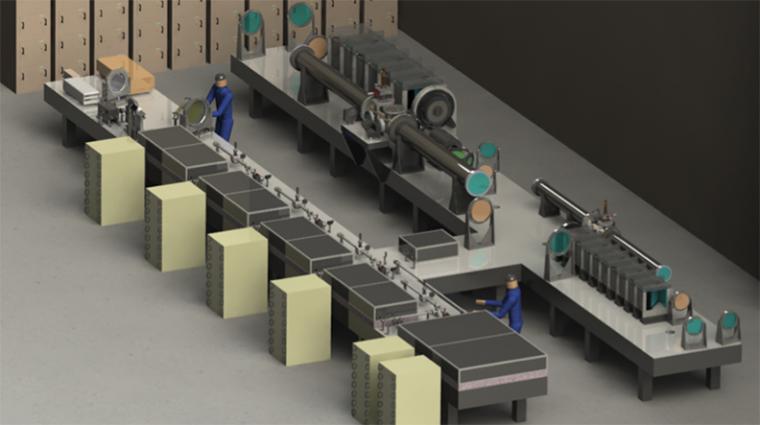 Lawrence Livermore National Laboratory has once again been selected to support the development and construction of an ultra-intense laser system for the European Union's Extreme Light Infrastructure Beamlines (ELI-Beamlines) in the Czech Republic.

A consortium led by National Energetics Inc., in partnership with Ekspla UAB, was awarded the contract to construct the system, which will be the most powerful laser of its class in the world, capable of producing peak power in excess of 10 petawatts (PW). Due to LLNL's long-standing expertise in laser research and development, the consortium selected the Laboratory for a $3.5 million subcontract to support development of this system.

"The award of this project is another clear statement of the internationally leading nature of LLNL's laser design capability," said Mike Dunne, LLNL's director of laser fusion energy. "Italso is another great example of where LLNL is helping move forward the global state-of-the-art of high power lasers, working collaboratively with the U.S. and European industry and academia. We are very excited to work with the National Energetics consortium, which has a very compelling approach to reaching the 10 petawatt goal."

Under the subcontract, LLNL will be responsible for: contributing to the physics design of the liquid-cooled laser amplifier, allowing it to get to the high energies required for accessing 10 PW power; contributing to the physics and engineering design of the short pulse compressor, which takes the high energy beam and compresses it to the required pulse length; and production of the large aperture diffraction gratings for this compressor.

This system will be one of the four major beamlines at the new ELI-Beamlines facility. In addition to work on this beamline, LLNL also is responsible for the design, development and installation of a second beamline at the facility, through a more than $45 million contract awarded in 2013. When commissioned to its full design performance, the laser system, called the "High repetition-rate Advanced Petawatt Laser System" (HAPLS), will be the world's highest average power PW laser system. The two systems will thus offer a highly attractive capability for the new ELI-Beamlines facility, which will appeal to academic and industrial researchers from across the world.