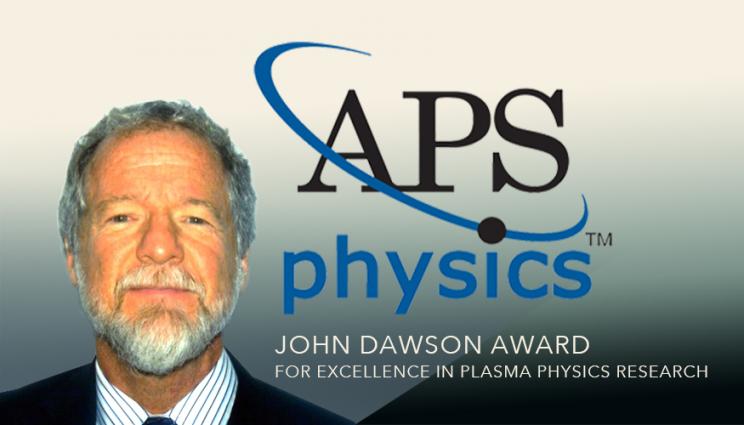 He is cited jointly with Todd Evans of General Atomics and Richard Moyer of the University of California, San Diego.

Fenstermacher’s team was cited "for the first experimental demonstration of the stabilization of edge localized modes in high-confinement diverted discharges, by application of very small edge-resonant magnetic perturbations, leading to the adoption of suppression coils in the ITER design."

ITER is an international nuclear fusion research and engineering megaproject, which will be the world's largest magnetic confinement plasma physics experiment.

The Dawson award recognizes a particular recent outstanding achievement in plasma physics research. The award consists of $5,000 to be divided equally in the case of multiple recipients, and includes a certificate citing the contributions made by the recipient or recipients, to be presented at an award ceremony at the Division of Plasma Physics annual meeting banquet.

ELM stabilization was predicted and confirmed experimentally by an international team of physicists in the DIII-D tokamak at General Atomics and published in a 2004 issue of Physical Review Letters and a 2006 issue of Nature Physics. Analysis of DIII-D data showed a correlation between the effectiveness of ELM mitigation and the width of the region in the plasma edge where the induced magnetic islands overlapped. The analysis suggested a threshold width of island overlap to achievefull ELM stabilization.

This threshold was used to make the initial predictions of the magnetic perturbation amplitude required to suppress ELMS in the ITER tokamak, which in turn guided the design of a proposed set of internal ELM control coils for ITER, currently under construction in France. These results have since been reproduced in tokamak experiments in South Korea, China and Germany. The suppression of these edge plasma instabilities is critically important for preventing damage to vacuum vessel walls of high power fusion reactors, including ITER. Based on the success of this approach, the ITER organization added a set of internal 3D perturbation coils, similar to those in DIII-D, in the baseline design of the device.

"I’m honored to be part of the team recognized for our pioneering work on ELM control with 3D magnetic fields in the DIII-D tokamak," Fenstermacher said.
"The period from 2004-10 was an intense time of experimentation and attempts to extrapolate the results, as the ITER project grappled with the difficult decision of whether to add expensive ELM control coils to the device. I very much appreciate the recognition from the APS-DPP that our work was essential to the decision to add the coils, which are now viewed as a critical system to assure ITER’s success."

Fenstermacher has been a physicist in the Magnetic Fusion Energy Program at LLNL since 1988. He graduated with a double major in mathematics and physics from Kalamazoo College and completed his master’s degree and Ph.D. in nuclear engineering (plasma physics) at the University of Michigan. He began his career in 1983 on location at LLNL as a member of the TRW plasma physics group supporting the MFTF-B tandem mirror. In 1988, he became a member of the LLNL staff, supporting the Microwave Tokamak Experiment (MTX) to couple the ALCATOR-C tokamak to a Free Electron Laser (FEL). Since 1994, he has been located off-site as a member of the LLNL experimental team at the DIII-D National Fusion Facility in San Diego.

Fenstermacher is a member of Phi Beta Kappa, Tau Beta Pi and the APS. He serves as a U.S. representative to the ITER Science and Technical Advisory Committee (STAC), has been the chair of the ITPA ELM Control working group since 2008, and has served for eight of the last 10 years as the experimental coordinator for the DIII-D tokamak program at General Atomics.