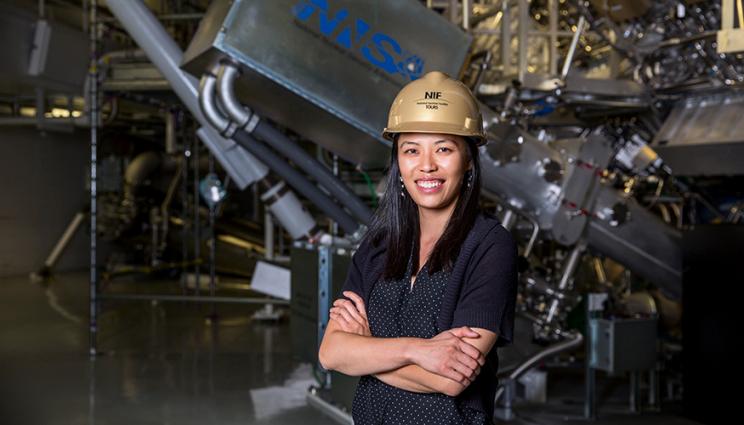 Tammy Ma has been selected as a recipient of the 2021 Excellence in Fusion Engineering Award by the Fusion Power Associates.

The Fusion Power Associates (FPA) Board of Directors has selected Lawrence Livermore National Laboratory (LLNL) experimental physicist Tammy Ma as the recipient of its 2021 Excellence in Fusion Engineering Award.

She will receive the award at the Fusion Power Associates 42nd annual meeting Dec. 15-16 in Washington, D.C. Click here for a complete list of previous recipients and information on the annual meeting.

FPA Excellence in Fusion Engineering Awards have been given annually since 1987, in memory of Massachusetts Institute of Technology professor David J. Rose, to recognize persons in the relatively early part of their careers who have shown both technical accomplishment and potential to become exceptionally influential leaders in the fusion field.

Ma is cited for “the impressive and influential body of scientific work she has completed during her relatively short career to date. She also is recognized for the many leadership roles she has played and is playing, both for a wide spectrum of technical projects and for her influence in fusion community planning and assessment activities.”

Ma said the award is meaningful to her because it comes from the leaders in the fusion field across the world and by people she has always looked up to.

“It’s also especially special to me because earlier winners from LLNL include Mark Herrmann, Prav Patel, Camille Bibeau, Abbas Nikroo and Steve Payne – people that are great friends and great scientists,” she said. “Anybody who knows me knows that I’m incredibly proud to be a part of the NIF team and to have been involved in ICF experiments.”

She has authored or co-authored more than 180 refereed journal publications and currently sits on the Fusion Energy Sciences Advisory Committee, providing advice to the Department of Energy’s (DOE) Office of Science on complex scientific and technological issues related to fusion energy and plasma research. She was the recipient of the 2013 Presidential Early Career Award for Science and Engineering, the 2016 Stix Award for Outstanding Early Career Contributions to Plasma Research from the American Physical Society for her work in quantifying hydrodynamic instability mix in ICF implosions and in 2018 was awarded a DOE Early Career Research Award. She was named 2019 Woman of the Year for the California 16th Assembly District for her commitment to education and to mentoring and encouraging young students who share her passion for science.

Ma recently served on a DOE Office of Science subcommittee that authored a long-range strategic plan laying out a decade-long vision for fusion energy and plasma science in the United States. She said it has been very gratifying to see the community pull together under this report.