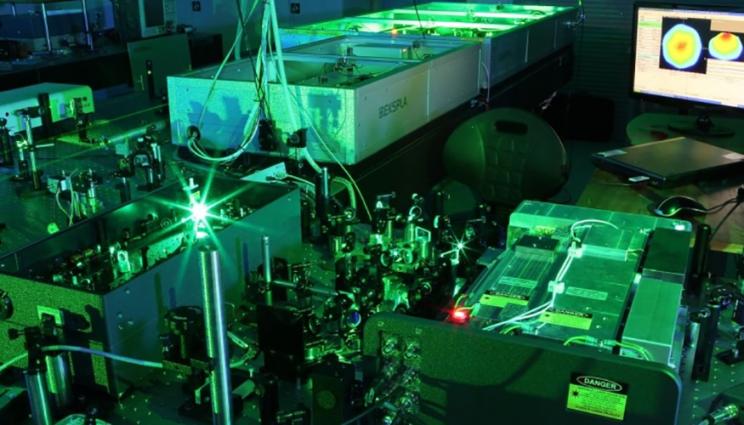 Engineers at Lawrence Livermore National Laboratory and their collaborators have developed a light-activated switch that, if fully deployed on the electrical grid, could reduce carbon emissions by more than 10 percent.

To address inefficiencies in transmitting electricity over smart grids, engineers at Lawrence Livermore National Laboratory (LLNL) and their collaborators have developed a light-activated switch that, if fully deployed, could reduce carbon emissions by more than 10 percent.

Capable of sending high-voltage, direct-current power along grid lines and switching high voltages up to 10 times faster than today’s solid-state devices, the transistor-like technology has been licensed to a California company for commercialization. The device is described in a paper published online by Scientific Reports.

LLNL scientist Stephen Sampayan, the project’s original principal investigator, said the device could be used to efficiently control and transmit power with substantially lower energy losses. By allowing more energy to flow into the power grid, deploying the devices in smart grids will result in less carbon dioxide creation for the amount of energy used. Researchers concluded this could potentially reduce billions of metric tons of CO2 from being released globally per year.

“A new and faster high-voltage, transistor-like device is coming of age,” Sampayan said. “The real breakthrough is that this is the first time we’ve been able to do bulk conduction of electricity with light control. Most of the light switches that exist now have been used as on-off switches, and you have virtually no control over them. This is more than an on-off switch — this technology gives users the ability to control the power more efficiently, essentially mimicking a transistor.”

The LLNL-patented technology is being commercialized by Opcondys Inc., a company based in Manteca, just 35 miles east of Livermore in California’s Central Valley. The company is in the process of testing the hardware with funding from the Advanced Research Projects Agency-Energy’s (ARPA-E) Creating Innovative and Reliable Circuits Using Inventive Topologies and Semiconductors (CIRCUITS) program. Opcondys plans to go into manufacturing and production later this year.

Co-author Paulius Grivickas, a solid-state physicist and a staff scientist in LLNL’s Physical and Life Sciences Directorate, came to the project to help elucidate physical mechanisms behind the device’s switching behavior.

Researchers knew that excited carriers in a vanadium-doped silicon carbide return to baseline quickly, but the exact lifetime of this process was unknown. However, they determined this parameter must be just right – a shorter lifetime allows the device to modulate faster and at higher frequencies, but too short and the device will lose power.

Grivickas and colleagues used state-of-the-art characterization methods to measure the carrier lifetime under various excitation conditions and found the underlying physics of the process. The carrier capture cross-section of a vanadium (a transition metal) impurity in silicon carbide was found to unlock ways to control carrier lifetimes.

“We showed that carrier lifetimes are very sensitive to vanadium doping, so the growth of right silicon carbide crystals requires such elaborate techniques as a chemical vapor deposition,” Grivickas explained. “Without discovering the physics and parameters behind a phenomenon, any material is simply a black box. Once we knew how much vanadium we needed to put in, it opened up a whole new avenue for looking at the problem.”

LLNL engineer Lars Voss, the project’s current principal investigator, said the device’s bulk conduction capabilities enable extraordinarily high-power handling benefits and afford numerous advantages over traditional solid-state devices for the electrical grid. The novel devices allow for extremely high voltages because light illumination is done with relatively low absorption, and their frequency of operation is decoupled from the high voltage, allowing them to best other transistor-like devices that typically trade power for frequency. And since it is laser-driven, Voss explained, the device can “turn on” at the speed of light.

“This combination of fast switching on and off will enable much lower switching losses for high-voltage power conversion, which is critically important for improving electrical efficiency,” Voss said. “This makes it especially well-suited for grid-level applications, where very large power levels need to be switched and converted. Beyond that, there is potential down the line for more compact devices for power conversion and control.”

Sampayan said in addition to efficient energy transfer in substations and power inverters, once reduced in scale, the devices could someday replace standard transistors and high-power switch modules in electronics due to their increased efficiency.

“You don’t have to build a high-voltage power device with this,” Sampayan said. “I can see this type of technology being simplified and put on a single chip, and the designer won’t know the difference between a light-controlled device such as this, or if it’s a standard junction transistor.”

Voss said his team is pursuing more efficient silicon carbide devices and building systems for a variety of applications to improve performance while maintaining reliability. They also have begun looking at the next generation of materials and ultrawide-bandgap semiconductors such as diamond, to enable even better performance.