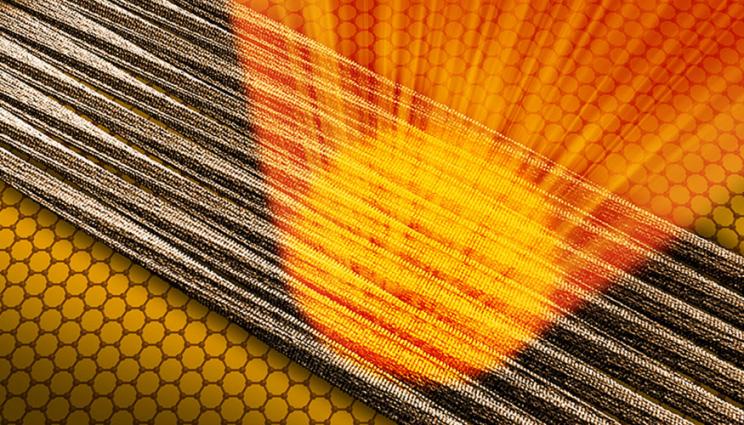 On the ultra-thin, extremely regular layer of graphene, the fibrils align themselves in parallel in large domains. The intense X-ray light from the X-rax free-electron laser LCLS at the SLAC National Accelerator Center enabled the researchers to gain partial information about the fibril structure from ensembles of just a few fibrils. Illustration: Greg Stewart/SLAC National Accelerator Laboratory.

To learn more about diseases such as Alzheimer’s and Parkinson’s, scientists have zeroed in on invisibly small protein filaments that bunch up to form fibrous clusters called amyloids in the brain: How do these fibrils form and how do they lead to disease?

Until now, the best tools for studying them have generated limited views, largely because the fibrils strands are so complex and tiny, just a few nanometers thick.

Now an international research team that included Lawrence Livermore National Laboratory (LLNL) scientists Matthias Frank and Matt Coleman have come up with a new method with the potential for revealing the structure of individual amyloid fibrils using powerful beams of X-ray laser light. They describe it in a report published earlier this month in Nature Communications.

In experiments conducted at the Linac Coherent Light Source (LCLS) at the Department of Energy’s SLAC National Accelerator Laboratory, the scientists placed up to 50 fibrils at a time on a layer of graphene, whose carbon atoms are arranged in a honeycomb-like pattern, and hit them with bursts of X-ray laser light. The graphene, it turned out, was almost transparent to the X-rays, and this allowed them to probe the structures of the delicate fibrils without picking up significant extraneous signals from the graphene layer in individual snapshots.

While the team did not uncover the complete fibril structure, they said the innovative method they developed at LCLS opens up a promising path for amyloid studies using X-ray free-electron lasers, or XFELs, such as LCLS.

Carolin Seuring, a scientist at the Center for Free-Electron Laser Science (CFEL) at DESY in Germany and principal author of the paper, said the results suggest this technique could even be used to determine the structure of individual fibrils.

"There is a common consensus that it is not the amyloid fiber alone, but rather the protofilaments composing the fiber and the process of fibril formation that are toxic to the cell," she said. "XFEL-based experiments have the potential to overcome the challenges we’ve faced in better understanding amyloid fibrils."

The problem with amyloids

While amyloid fibrils are believed to play a major role in the development of neurodegenerative diseases, scientists have recently discovered that they also have other functions, Seuring said.

"The ‘feel-good hormone’ endorphin, for example, can form amyloid fibrils in the pituitary gland," she said. "They dissolve into individual molecules when the acidity of their surroundings changes, after which these molecules can fulfil their purpose in the body. Other amyloid proteins, such as those found in post-mortem brains of patients suffering from Alzheimer’s, accumulate as amyloid fibrils in the brain, and cannot be broken down and therefore impair brain function in the long term."

Accurate information about the structure of amyloid fibrils can inform scientists about their function, she added.

"Our aim is to understand the role of the formation and structure of amyloid fibrils in the body and in the development of neurodegenerative diseases," Seuring said.

One barrier to studying amyloid fibrils is that they cannot be grown as crystals, which are the conventional targets for structural studies using X-rays. And because individual amyloid fibrils are so small, they don’t produce a measurable signal when exposed to X-rays. Scientists typically line up millions of fibrils parallel to each other to amplify the signal, but information about their individual differences is lost in the process.

"A major part of our understanding about amyloid fibrils is derived from nuclear magnetic resonance and cryo-electron microscopy data," Seuring said. "But these methods are also of limited value for seeing individual differences between amyloid fibrils or observing their formation.

"The structural analysis of amyloids is complex and examining them using existing methods is hampered by differences between the fibrils within a single sample. Being able to look at the individual components of the sample would make it possible to determine the 3D structure of one type of fibril at a time."

Earlier attempts to study fibrils at X-ray lasers delivered them into the path of the beam in jets of fluid. Switching to a solid graphene carrier gave the team two advantages, according to CFEL’s Henry Chapman, a professor at the University of Hamburg and a lead scientist at DESY.

Because graphene is just one layer of atoms thick, it leaves hardly a trace in the diffraction patterns formed by X-rays scattering off the fibrils, which are used to determine their structures, he said. And the regular structure of the graphene encourages the fibrils to all line up in the same direction.

While graphene is a very promising sample support material, it is so thin and flexible that it needs to be supported itself to keep fibril samples in place and scan samples through the X-ray beam for these X-ray laser measurements.

This is where work by LLNL’s Matthias Frank and Matt Coleman on novel sample supports came in handy. As part of a previous LLNL Laboratory Directed Research and Development project and their ongoing National Institutes of Health project, they had been working on sample supports based on small silicon wafers ("chips") that contained large numbers of small-area windows covered by ultra-thin membranes that were used to hold biological samples for X-ray laser measurements.

Those chips could be scanned through the X-ray beam to bring a new window and fresh sample into the X-ray beam for each new X-ray shot. Frank and Coleman worked with Seuring’s group at CFEL/DESY on replacing the thin membranes on these chips with graphene, which is even thinner. This approach provided the solution for using graphene to hold the fibril samples while, at the same time, supporting the graphene and scanning the sample through the X-ray beam using motorized stages and scripts developed under previous work.

This new approach allows diffraction patterns to be obtained from fewer than 50 amyloid fibrils. Based on the results, the team hopes to eventually get patterns from single fibrils. To get to that goal, new methods of exposing a single fibril to the XFEL beam will need to be developed, according to Seuring. "With enough snapshots, a full 3D data set of a single fibril should be possible."

The exceptionally bright and narrowly focused beam at LCLS’s Coherent X-ray Imaging instrument also was key to the team’s success in taking data from such a small number of fibrils, according to SLAC staff scientist Mengning Liang.

Intense X-ray pulses at XFELs limit the exposure of delicate samples to damaging X-rays. In this study, the fibrils were exposed for only a few femtoseconds, or millionths of a billionth of a second. Before the molecules are destroyed, information about their structure can be read by detectors.

"Fibrils are a third category of samples that can be studied with the ‘diffract before destroy’ method at XFELs, in addition to single particles and crystals," Liang said. "In some regards, fibrils fit between the other two: they have regular, recurring variations in structure like crystals, but without the rigid crystal structure."

The scientists tested their method on samples of well-studied tobacco mosaic virus filaments and smaller amyloid fibrils, some of which are associated with certain types of cancer. The tests produced structural data with a high degree of accuracy: The resolution in the diffraction images was almost on the scale of a single atom.

"It is amazing that we are essentially carrying out the same experiments as Rosalind Franklin did on DNA in 1952, which led to the discovery of the double helix, but now we are reaching the level of single molecules," Chapman said.

LLNL’s Frank is a physicist in the Biosciences and Biotechnology Division (BBTD) who is working on developing instrumentation and technologies for biosecurity and biomedicine. For the last 13 years, he has been working on developing and demonstrating new methods and technologies for biological imaging with X-ray free electron lasers, such as LCLS, together with colleagues from SLAC, CFEL/DESY and other international collaborators.

Coleman is a radiation biologist, also in BBTD, who is working on developing technology for biomedicine. For the last decade, he has been working on structural and biochemical characterization of HDL and LDL proteins capable of forming fiber-like structures that are analogous with some of the properties described by Seuring and others.

Seuring and the LLNL scientists will have more upcoming LCLS beam time at the end of May, where they plan to test the new approach further and to secure much more data on fibril samples.