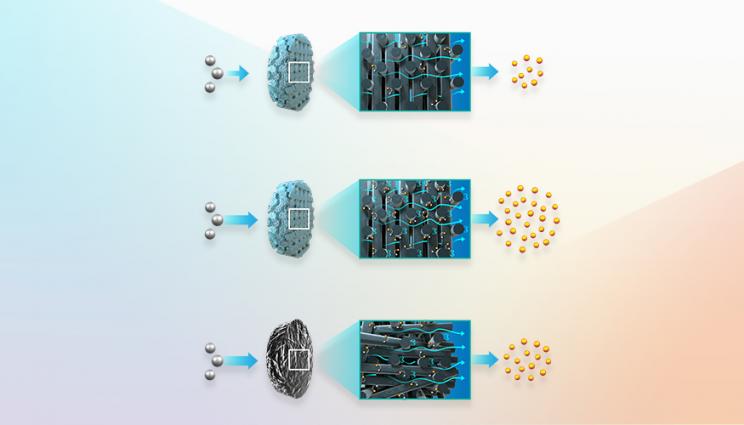 For the first time, Lawrence Livermore National Laboratory engineers have 3D-printed carbon flow-through electrodes (FTEs) from graphene aerogels. By capitalizing on the design freedom afforded by 3D printing, researchers demonstrated they could tailor the flow in FTEs, dramatically improving mass transfer – the transport of liquid or gas reactants through the electrodes and onto the reactive surfaces. Illustration by Veronica Chen/LLNL.

As described in a paper published by the Proceedings of the National Academy of Sciences, LLNL engineers for the first time 3D-printed carbon FTEs — porous electrodes responsible for the reactions in the reactors — from graphene aerogels. By capitalizing on the design freedom afforded by 3D printing, researchers demonstrated they could tailor the flow in FTEs, dramatically improving mass transfer – the transport of liquid or gas reactants through the electrodes and onto the reactive surfaces. The work opens the door to establishing 3D printing as a “viable, versatile rapid-prototyping method” for flow-through electrodes and as a promising pathway to maximizing reactor performance, according to researchers.

“At LLNL we are pioneering the use of three-dimensional reactors with precise control over the local reaction environment,” said LLNL engineer Victor Beck, the paper’s lead author. “Novel, high-performance electrodes will be essential components of next-generation electrochemical reactor architectures. This advancement demonstrates how we can leverage the control that 3D printing capabilities offer over the electrode structure to engineer the local fluid flow and induce complex, inertial flow patterns that improve reactor performance.”

Through 3D printing, researchers demonstrated that by controlling the electrodes’ flow channel geometry, they could optimize electrochemical reactions while minimizing the tradeoffs seen in FTEs made through traditional means. Typical materials used in FTEs are “disordered” media, such as carbon fiber-based foams or felts, limiting opportunities for engineering their microstructure. While cheap to produce, the randomly ordered materials suffer from uneven flow and mass transport distribution, researchers explained.

“By 3D printing advanced materials such as carbon aerogels, it is possible to engineer macroporous networks in these material without compromising the physical properties such as electrical conductivity and surface area,” said co-author Swetha Chandrasekaran.

The team reported the FTEs, printed in lattice structures through a direct ink writing method, enhanced mass transfer over previously reported 3D printed efforts by one to two orders of magnitude, and achieved performance on par with conventional materials.

Because the commercial viability and widespread adoption of electrochemical reactors is dependent on attaining greater mass transfer, the ability to engineer flow in FTEs will make the technology a much more attractive option for helping solve the global energy crisis, researchers said. Improving the performance and predictability of 3D-printed electrodes also makes them suitable for use in scaled-up reactors for high efficiency electrochemical converters.

LLNL scientists and engineers are currently exploring use of electrochemical reactors across a range of applications, including converting CO2 to useful fuels and polymers and electrochemical energy storage to enable further deployment of electricity from carbon-free and renewable sources. Researchers said the promising results will allow them to rapidly explore the impact of engineered electrode architectures without expensive industrialized manufacturing techniques.