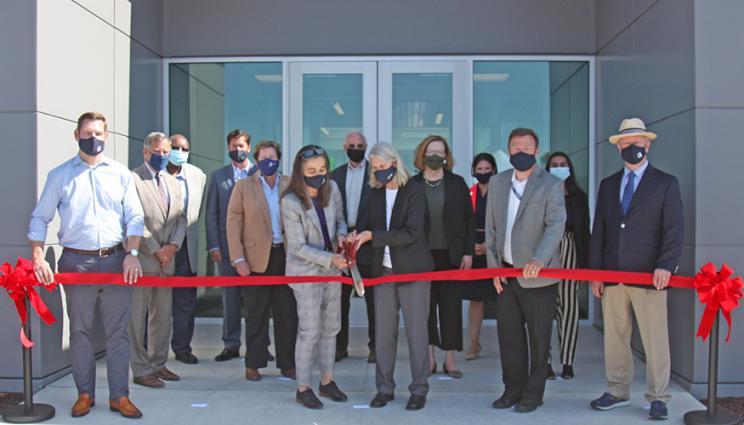 The Lab hosted a ribbon-cutting ceremony for a new office building (Bldg. 642) and a conference annex (Bldg. 643), which will provide modern office and meeting space for LLNL researchers in predictive biology, materials and manufacturing, the Lab’s Innovation & Partnerships Office and High Performance Computing Innovation Center. The interconnected buildings are the latest additions to the 110-acre LVOC, a joint initiative of the NNSA, LLNL and Sandia National Laboratories, developed as an open and unclassified innovation hub for stimulating collaborative projects with external partners in government, industry and academia.

“Today’s ribbon-cutting shows how much we care about infrastructure modernization in the national security enterprise,” said Department of Energy Under Secretary for Nuclear Security and NNSA Administrator Jill Hruby, appearing in her first public event since taking the helm of NNSA on July 22. “I hope that LVOC’s state-of-the-art facilities will excite the current and next generation of scientific and engineering talent at the labs and at our partner institutions. I look forward to the innovation that will be generated in LVOC and to supporting continued investments to reap benefits for both national security and the broader scientific community.”

LLNL Director Kim Budil said she began her career at the Lab as a graduate student, working side-by-side with Lab scientists at Hertz Hall, now part of the LVOC campus. Budil called the expansion “a big deal for our Laboratory” and said it will help LLNL “begin to realize this 21st century vision of what a national security lab has to do,” including addressing threats from climate change to pandemics, as well as improve community engagement with the greater Bay Area and Central Valley.

“For us to really tackle these problems, we need to bring together all the best minds, and that includes our partners in academia, in the private sector, in non-governmental organizations, in the philanthropic sector and from the international scientific community,” Budil said. “This facility plays an absolutely essential role in enabling us to bring all of those constituents together to solve these big problems for the world that we live in today, so I’m incredibly excited.”

The facilities, both LEED Gold Certified for energy and resource efficiency, are connected by an open, outdoor collaborative environment for meetings and group gatherings. LLNL scientists and engineers, including some from LVOC’s Advanced Manufacturing Laboratory and others from the predictive biology program, will begin moving into the offices in late August.

“With a bias toward our strategic priorities, these building occupants will focus both on innovation and on impact and delivery,” said LLNL Deputy Director for Science and Technology Pat Falcone, who served as the master of ceremonies for the event. “They will ‘spin-in’ new ideas from work with technical partners to enrich and enhance our work on the main Lab campus behind the fence, and ‘spin-out,’ or enable industrial application and national benefits of Lab-invented technologies. That spinning swirl is really where the magic happens.”

Falcone also highlighted important LVOC partners and collaborators, including Andrew McIlroy, Sandia/California’s associate labs director for Integrated Security Solutions, and Dona Crawford, founding president of the Livermore Lab Foundation. “The foundation is a key partner for new types of collaboration that the Laboratory is imagining,” she noted.

Besides allowing the Lab to populate LVOC, freeing up much-needed office space elsewhere on-site, elected officials said the expansion would help spur economic development and competitiveness and generate more opportunities for public/private partnerships across the region and the state.

“I look at [LLNL] as a Lab that takes on the needs and wants of the American people,” said U.S. Rep. Eric Swalwell. He referred to nuclear security as the ‘need’ and stated “This open campus is the ‘want’ to bring in the community so they can work hand in glove with the research that’s taking place at the Lab to take on so many of the challenges we have here locally. It’s very, very exciting … [Livermore] is a city in renaissance.”

U.S. Rep. Jerry McNerney said he witnessed the benefits of tech transfer from the national labs to the private sector while working as a contractor for Sandia National Laboratories, and said he was looking forward to seeing the impact LVOC will have going forward.

State Assemblywoman Rebecca Bauer-Kahan noted the significance of having women scientists in leadership positions at the event and said the occasion underscored the importance of engagement between the laboratories, local schools, the University of California campuses and nonprofits, to nurture future women scientists and address the world’s most pressing issues.

“What we’re here today to celebrate is really that incredible partnership,” said Bauer-Kahan. “To take the findings coming out of this lab and put them into action to fight climate change every day at the state level is critical work, and it only can be done if we continue to collaborate and create opportunities like the one we’re seeing here today.”

Representatives from the offices of U.S. Senators Dianne Feinstein and Alex Padilla, Jim Lazarus and Zahra Hajee respectively, along with Livermore Mayor Bob Woerner and Alameda County Supervisor David Haubert, also offered their congratulations on the project’s completion and hopes that the expansion would facilitate impactful technologies and collaborations.

“The Open Campus grew out of the idea of making the research of our two labs more accessible to academia, entrepreneurs and the business community,” said Woerner, a former LLNL physicist. “Back when I joined the Lab [in 1976], there was always talk about technology transfer. I remember what this place looked like, and it’s just fantastic that it’s finally come to reality.”

“Together, each of us today joined forces to deliver a successful project and achieve a common goal,” Clark said. “We were laser-focused on delivering an innovative building while keeping safety and quality a top priority during design and construction.”

Following the speaker presentation, NNSA and LLNL leadership and elected officials cut the ribbon to signify the opening of the facilities, concluding the event with a tour of the buildings.

For more on the Livermore Valley Open Campus, visit https://lvoc.org/. To view the event, click here.