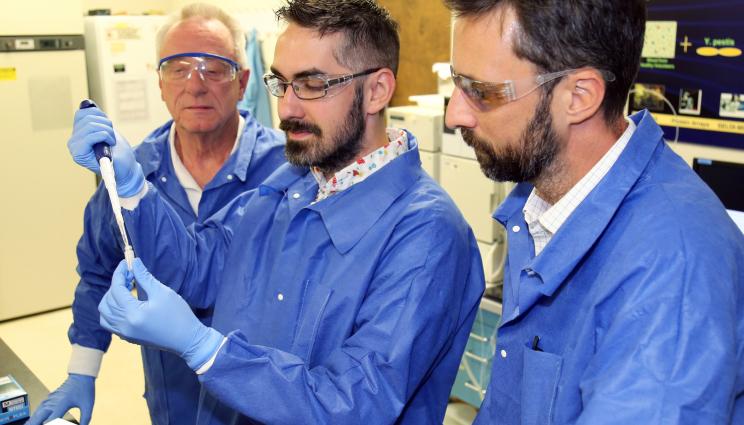 A Lawrence Livermore National Laboratory (LLNL) biomedical technology that can deliver vaccines and drugs inside the human body has been licensed for use in cancer treatments to a Michigan company.

The Livermore-developed technology, using nanolipoprotein particles (NLPs), has been licensed to Ann Arbor-based EVOQ Therapeutics for cancer immunotherapy, which deploys the body’s own immune system to fight cancer.

Developed by LLNL biomedical researchers over a decade starting in 2005, NLPs are water-soluble molecules that are 6 to 30 billionths of a meter in size and resemble HDL particles, which are the human body’s good cholesterol.

Since conventional cancer vaccines have not been delivered optimally to patients in many cases, EVOQ is developing a vaccine delivery platform that uses synthetic HDL particles.

One approach to cancer immunotherapy, called checkpoint inhibitors, has raised hopes in the cancer treatment community, though this approach is only successful in 20 percent to 40 percent of cases.

However, in animal models, when the synthetic HDL delivery is combined with checkpoint inhibitors, there is complete tumor regression in about 85 percent of cases, EVOQ officials said, adding that these were challenging models such as colon carcinoma and melanoma.

In a personalized version of cancer immunotherapy, doctors remove a tumor biopsy from the patient and sequence the genome of the tumor to identify potential new antigens (or neoantigens) that can be formulated into a vaccine.

The next step is to make synthetic peptides, or small fragments of neoantigen proteins, that can be used as a treatment, usually in the form of a cocktail of peptides. The peptides are incorporated into the NLPs along with adjuvants (molecules that activate the patient’s immune system).

The NLPs carry the peptides and enter the body’s lymph nodes, activating the T-cells. These activated T-cells then circulate throughout the body and destroy the cancerous tumor cells.

Using NLPs for delivering cancer vaccines offers several advantages in the view of Yash Vaishnav, a business development executive in the Lab’s Innovation and Partnerships Office, who negotiated the license agreement with EVOQ Therapeutics.

One advantage of NLPs is that while peptides are unstable when they are circulating in the blood in free form, the NLPs can protect and transport them to the lymph nodes.

Another is that NLPs permit the co-delivery and co-localization of peptides and adjuvants coming into the lymph nodes.

"We want the peptides and adjuvants to arrive at the lymph nodes at the same time in a particulate form co-localized on the surface of the NLPs," Vaishnav said, noting that other advantages of NLPs include rapid cellular uptake, biocompatibility and minimal toxicity.

The NLPs were initially developed between 2005 and 2008 by a team of LLNL scientists led by Paul Hoeprich, a bioorganic chemist, with about $7.4 million of Laboratory Directed Research and Development (LDRD) funds, which is internal research money.

Other inventors on the licensed patents include: biologists Nick Fischer and Sean Gilmore, in addition to two other researchers who have since left LLNL -- Craig Blanchette, a biophysicist now at Genentech and Paul Henderson, a biologist and an associate professor at the University of California, Davis.

"We brought their ideas together and developed the concept of NLPs. I saw this as potentially an important advance for understanding the mechanics of drug transport into cells and potentially as a platform for the development and delivery of vaccines," Hoeprich said.

"Without the support of the LDRD Program, the NLPs wouldn’t be where they are today."

LLNL researchers, including radiobiologist Matt Coleman and immunologist Amy Rasley, have continued the development of NLPs. In addition to the use of NLPs for transporting cancer vaccines, these HDL-like molecules also are being studied at LLNL for a number of other applications, including development of vaccines for Francisella tularensis (rabbit fever), influenza and chlamydia; formulating drug molecules to enhance their efficacy; and the shuttling of therapeutics across the blood-brain barrier.