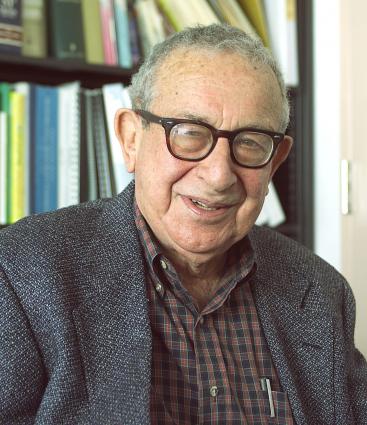 Seymour Sack, a prominent physicist who during his 35 years at Livermore emerged as one of the foremost U.S. nuclear weapons designers, died Tuesday, Nov. 29, in Berkeley. He was 82.

Born Sept. 8, 1929, in New York City, Sack received his Ph.D in physics from Yale in 1954, and joined the Laboratory in 1955. After nine years in the Theoretical Physics Division, Sack joined B Division in 1964.

Sack was instrumental in developing the first stages of all of the two-stage thermonuclear devices within the nuclear stockpile. His weapon design programs introduced insensitive high explosives, fire-resistant plutonium pits and other state-of-the-art nuclear safety elements. Some of his design concepts are found in every one of the U.S. stockpile weapons - whether designed by Livermore or Los Alamos.

In the late 1950s, he developed 2D design codes and in the early 1960s applied them to the design of the first safe, modern primary deployed in the Polaris warhead.

During the 1960s, he designed primaries for the first bombs small enough to be deployed in the Poseidon submarine-launched ballistic missile and the Minuteman intercontinental ballistic missile.

These designs were prototypes for the warheads developed by Los Alamos and Lawrence Livermore national laboratories in the 1970s and 1980s.

During the late 1970s and early 1980s, he turned his efforts to the conception and realization of the modern, extremely safe, air-carried nuclear weapon. The potential for aircraft accidents with catastrophic consequences made this a critical need, which Sack championed for the weapons stockpile. He designed the warhead for both the high-yield aerial bomb and the ground-launched cruise missile. Simultaneously, he directed both development projects. In this project, Sack developed the first use of insensitive high explosive and the first fire-resistant pit, thereby greatly enhancing the safety of nuclear explosives in crash and fire accidents.

Finally, in the 1980s, all of these safety innovations were brought together for the first time in a strategic warhead in the development of the Peacekeeper warhead - the safest, most advanced warhead in the active stockpile.

"I was very saddened to hear that Seymour Sack had passed away," Lab Director George Miller said. "We all, this nation and its allies, owe Seymour a tremendous debt of gratitude - many of the ideas and their implementation in the strong nuclear deterrent that allowed us to remain safe and secure during the Cold War were directly due to Seymour."

"His legacy continues in our current deterrent forces. On a personal level, Seymour was a treasured leader, teacher, mentor, adviser and friend. I will miss him," Miller added.

"I am terribly sad at Seymour's passing," said Bruce Goodwin, principal associate director for Weapons Complex and Integration. "In addition to being brilliant and dedicated, he was kind and modest. This is truly rare combination."

"Seymour gave us the opportunity to learn from him and he was a great and patient teacher. We who had the honor to work with him are truly grateful for his generosity. We had the benefit of his gentlemanly manner. He described himself as a pussycat. I know that he really was. I miss him," Goodwin said.

"Seymour's influence on the U.S. nuclear deterrent is immense. His fingerprints are on all of the primaries in today's modern stockpile," said Mike Dunning of B Division. "Those who have had the privilege of walking with him in the halls of B Division over the 56 years since he joined the Laboratory know that his impact is not found only in the past; but his enduring legacy can be found in our future. His influence on our nuclear design community has continued to this year. The high standard of creativity and responsibility is present today in the many of us who have learned our craft under his mentoring."

"Seymour leaves behind a large family of scientists who owe to him the insistence on excellence he passed on to the design community. We stand on the shoulders of this giant and we shall miss him," Dunning said.

Sack's long list of awards and recognition includes the E.O. Lawrence award in 1973, "for his innovative contributions to the theory of nuclear weapons, his development of computer codes fundamental to the design of modern nuclear weapons, his leadership in the development of new and important weapon design concepts, and his role in the engineering and testing of weapons for our nuclear stockpile."

In 1997, he received the Fleet Ballistic Missile Achievement Award, which acknowledged his work on the W62 and W68 warheads.

In 2003, Sack was awarded the prestigious Enrico Fermi award "for his contributions to the national security of the United States in his work assuring the reliability of nuclear weapons, and thus deterring war between the superpowers." Past recipients of the Fermi award - a presidential honor awarding scientists of international stature -- include Ernest O. Lawrence, Glenn Seaborg and Edward Teller.

After his retirement from the Lab in 1990, he continued as a Laboratory associate for many years and remained active in nuclear weapons design and policy issues. He continued to mentor B Division scientists well past his retirement until the year of his passing.

Sack is survived by his wife of 55 years, Blanche Sack.

No services are planned.