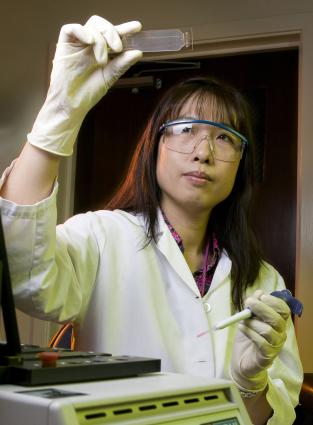 LLNL molecular biologist Crystal Jaing will be inducted into the Alameda County Women's Hall of Fame this Saturday (March 19).

One of the developers of a Lawrence Livermore National Laboratory device that could assist in detecting bioterrorism attacks, diagnosing diseases and checking product safety will be honored Saturday.

For her achievements, LLNL molecular biologist Crystal Jaing will be inducted into the Alameda County Women's Hall of Fame (WHOF) during the 18th annual awards ceremony, set for the Greek Orthodox Cathedral in Oakland. The event will begin at 12:30 p.m.

One of 11 Alameda County women to be inducted, Jaing will be recognized for her work in science.

Jaing is a co-developer of the Lawrence Livermore Microbial Detection Array (LLMDA), which could enable law enforcement, medical professionals and others to detect within 24 hours any virus or bacteria included among the array's probes.

Developed between October 2007 and February 2008, the LLMDA detects viruses and bacteria with the use of 388,000 probes that fit in a checkerboard pattern in the middle of a one-inch wide, three-inch-long glass slide. The current operational version of the LLMDA contains probes that can detect more than 2,000 viruses and about 900 bacteria.

The LLMDA allows law enforcement and homeland security officials to not only identify biological pathogens on the federal government's priority screening list, but any other sequenced bacteria or virus, including possible novel or emerging pathogens.

As the molecular biologist responsible for validating the microbial detection array technology, Jaing undertakes the efforts to ensure that the system functions as it is intended.

She also establishes and manages the collaborations of the Laboratory for the LLMDA with about 20 universities, government agencies, nonprofit research centers and pharmaceutical companies. One of LLNL's collaborators is the Copenhagen, Denmark-based Statens Serum Institute, which is evaluating the microarray to detect viruses in clinical samples from people.

One of the first areas where the LLMDA is expected to be deployed is in product safety. To date, some 15 companies worldwide have expressed interest in utilizing the technology for food or product safety.

Already, in collaboration with the San Francisco-based Blood Systems Research Institute, Jaing and her colleagues were asked to use the array in testing a vaccine called Rotarix, which is on the market and is used to prevent diarrhea in babies.  Jaing and her team found the vaccine contained segments of a pig virus, which were, fortunately, benign.

The two other major sectors where the technology is expected to find applications are in detecting bioterrorist pathogens and in medical diagnostics.

Jaing also plays an important role in developing technologies to detect biological pathogens that could be used in bioterrorism, to conduct forensic analysis of these materials, and to assist in detecting diseases.

She joins eight other current or past LLNL employees to be selected for the Alameda County WHOF. They include: Dona Crawford, associate director for Computation; Hope Ishii, a physicist in the Lab's Institute for Geophysics and Planetary Physics; Tammy Jernigan, chief of staff for Weapons and Complex Integration; Ellen Raber, deputy program director for Counterterrorism within the Global Security principal directorate; Pam Hullinger, agricultural security program lead; Lisa Poyneer, an electrical engineer; Gina Bonanno, a program manager for the National Ignition Facility; and Claire Max, now a professor of astronomy and astrophysics at the University of California, Santa Cruz.