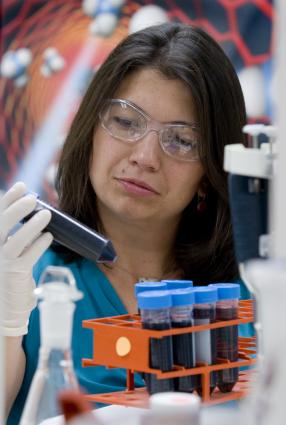 LIVERMORE — Lawrence Livermore National Laboratory has exclusively licensed to Porifera Inc. of Hayward a carbon nanotube technology that can be used to desalinate water and can be applied to other liquid based separations.

Carbon nanotubes — special molecules made of carbon atoms in a unique arrangement — allow liquids and gases to rapidly flow through, while the tiny pore size can block larger molecules, offering a cheaper way to remove salt from water.

"The technology is very exciting," said Olgica Bakajin, who serves as chief technology officer of Porifera. "It’s at the right place to take it to the marketplace."

Bakajin formerly worked at LLNL where she was recruited in 2000 as a Lawrence Fellow and then moved on to become chief scientist on the carbon nanotube project along with LLNL chemist Aleksandr Noy, another former Lawrence Fellow. The license was awarded through LLNL’s Industrial Partnership Office.

Porifera is developing membranes with vastly superior permeability, durability and selectivity for water purification and other applications in the clean tech sector such as CO 2 sequestration. The technology is based on discoveries made at the National Nuclear Security Administration’s Lawrence Livermore Lab.

The technology first took off when it was funded by Livermore’s Laboratory Directed Research and Development Program and supported by the Science and Technology Principal Directorate. Bakajin and Noy’s research originally focused on using carbon nanotubes as a less expensive solution to desalination. The technique was first demonstrated using a nanotube membrane on a silicon chip the size of a quarter.

Recently, the team made up of Bakajin and Noy as well as another LLNL scientist, Francesco Fornasiero, and Porifera scientists Sangil Kim and Jennifer Klare, thought about different applications for the nanotube membranes.

"Carbon sequestration has always been at the back of our minds, as unique properties of carbon nanotube membranes provide critical advantages for potential use in carbon sequestration applications," Noy said.  Bakajin agreed the membranes would separate CO 2 from nitrogen in power plant emissions. The membranes would transfer the two gases at a different rate so that the CO 2 could be separated and sequestered. Sequestering CO 2 is a key strategy to help curb global warming.

"We’ve known about the possibilities for this for quite some time," she said. "The reason it makes sense to do it is because of the unique nanofluidic properties of carbon nanotube pores.  We believe that our approach will work and we’re looking forward to working with the Lab on this."

Recently, the Laboratory, Porifera, and UC Berkeley received more than $1 million from the Department of Energy’s Advanced Research Projects Agency to develop the carbon capture technique using the nanotubes.

ARPA-E’s mission is to develop nimble, creative and inventive approaches to transform the global energy landscape, while advancing America’s technology leadership. The grant is for two years.

"It’s the first time that this kind of grant has been given," Bakajin said. "It’s on us to show that it’s really worth it. The agency’s success is going to depend on how well we do. "

In conjunction with other partners, Porifera also secured $3.3 million from the Defense Advanced Research Projects Agency (DARPA) to develop a small, portable self-cleaning desalination system that could be used in the field.

"If we can really make this work it is a game-changing technology," Bakajin said. "The goal is to go for any water…it could take out contaminants. It’s a real challenge, and the technology has great potential."

Porifera Inc. was founded in 2008 with the sole goal of commercializing carbon nanotube membrane technology. The R&D team includes the technology’s original inventors.