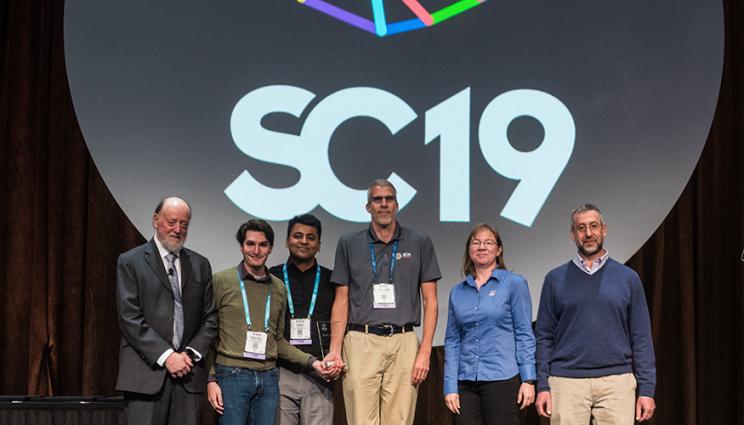 The paper, entitled “Massively Parallel Infrastructure for Adaptive Multiscale Simulations: Modeling RAS Initiation Pathway for Cancer,” describes the workflow driving a first-of-its-kind multiscale simulation on predictively modeling the dynamics of RAS proteins — a family of proteins whose mutations are linked to more than 30 percent of all human cancers — and their interactions with lipids, the organic compounds that help make up cell membranes. Developed as part of the Pilot 2 project in the Joint Design of Advanced Computing for Cancer program, a collaboration between the Department of Energy (DOE) and National Cancer Institute (NCI), the research resulted in a Multiscale Machine-Learned Modeling Infrastructure (MuMMI) that investigators found was scalable to next-generation heterogenous supercomputers such as LLNL’s Sierra and Oak Ridge’s Summit.

“I can’t begin to describe how happy I am for our team — it’s been a lot of hard work, and to have it recognized at this level is just amazing,” said Francesco Di Natale, LLNL computer scientist and the paper’s lead author. “This whole team worked extraordinarily hard to make sure the data that we were getting out actually made sense. The ability to go through that data was a computational challenge in itself.”

“The panel could have chosen a lot of other awesome papers on solvers and other technologies, and to have this paper recognized this year as the top entry really speaks to everyone who worked on it,” added LLNL computer scientist and co-author Peer-Timo Bremer. “They also recognize that it’s a new wave of computing — complex workflows are going to become even more important. This was the largest machine at the largest scale for the largest problem. I think that all came into play, and the fact that it’s a high-impact application doesn’t hurt.”

Researchers reported that MuMMi is capable of simulating the interaction between RAS proteins and eight kinds of lipids to investigate RAS dynamics on a macroscale, as well as on a molecular level. While the multi-scale approach wasn’t novel, the researchers said, using a machine learning algorithm to determine which lipid “patches” are interesting enough to more closely examine with the micromodel has never been done before, saving researchers’ compute time and money and providing major advantages over randomized patch selection, including wider coverage of the phase space of the RAS lipid neighborhoods.

The macro-to-micromodel simulations allowed researchers to see how 300 different RAS proteins interacted on a cell membrane, generating data that can be tested experimentally at FNLCR to ensure the models are representative of actual biological results. The models will help Frederick and the NCI to carry out experiments, test predictions and generate more data that will feed back into the machine learning model, creating a validation loop that will produce a more accurate model, researchers said.

“It absolutely required a multidisciplinary effort,” said Sara Kokkila-Schumacher, an IBM researcher who worked on the project while a postdoc at LLNL through the Center of Excellence. “It was a challenging project and the set of tools we had to build really required expertise in a wide variety of areas, including tool development, understanding the biology and getting insight and actual parameters from experimental teams.”

The team has secured funding for the fourth year of the project which will continue on Lassen, Sierra’s unclassified companion system and the 10th fastest supercomputing system in the world. After various improvements, the next phase will also be run on the world’s most powerful supercomputer, Summit at ORNL.