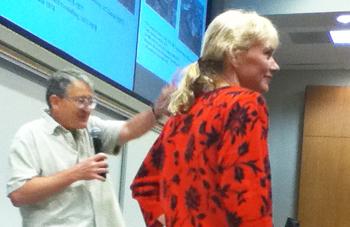 Tom Slezak and Beth Vitalis give the presentation, "The Power of Bioinformatics," one of the seminars in the four-part series.

Las Positas College (LPC) students studying science learned first-hand about the innovative research conducted at LLNL, as well as the teamwork that accompanies it during "Theory to Practice: How Science Gets Done." This four-part science and engineering seminar series wrapped up recently at Livermore's LPC campus receiving rave reviews from participants.

The seminars, targeted for science majors and faculty, allowed LLNL scientists and engineers a forum to share a range of basic and applied research while giving a "behind the scenes" perspective of how science really works -- from solving biological problems to working together to develop new medical devices to addressing changes to evolving biothreats.

The idea for the interdisciplinary seminars, and the collaboration between Las Positas College and LLNL came from LPC's Nan Ho, a biology professor who proposed that the two institutions work together. Ho has LLNL connections through her research internship and participation in the U.S. Department of Energy Academies Creating Teacher Scientists (DOE ACTS) program, part of the Lab's Teacher Research Academy, for two summers.

"After each of the evening seminars, I continued to hear 'buzz' from faculty and students who attended. They were thrilled to discover that what they are teaching and learning in their science classes can be applied outside the classroom, and also that LLNL research aims to solve real-world problems such as cancer" Vitalis said. "The series was very successful as the 200 seat auditorium was nearly full or standing room only for each of the four sessions," she said.

In addition to providing outreach to the local community college, LLNL, by working with LPC, fulfills an initiative to increase interactions between the national labs and academia, set forth in the recent launch of the Livermore Valley Open Campus (LVOC). The LVOC is a partnership between LLNL, Sandia National Laboratories and the Department of Energy/NNSA to promote even greater collaboration between researchers at the two laboratories and their counterparts outside the Department of Energy (DOE) complex.

The LVOC could enable a scientific information exchange between LPC and LLNL and provide opportunities for laboratory scientists to positively impact their local community college, as well as for the college to serve as a recipient and "test bed" of laboratory innovations. In addition, through the LPC/LLNL exchange, students could identify summer positions at the Lab that will help them determine a career field that meets their interests and skills.

Plans are under way for a second seminar series during the 2011-2012 academic year.

"Theory to Practice: How Science Gets Done" seminars include:

Livermore joins with Oak Ridge and Argonne to develop next supercomputers