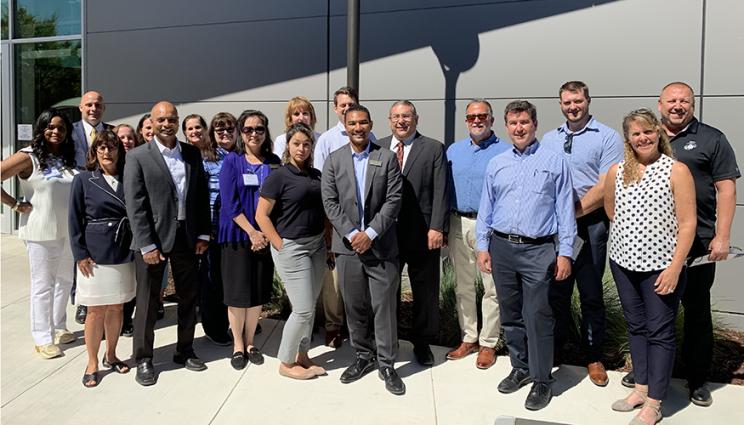 LPC President Dyrell Foster, who was visiting the Lab for the first time, attended the meeting, along with Chabot-Las Positas Community College District Chancellor Ron Gerhard and other faculty leadership. Engineering Directorate leaders were joined by adjunct professors at LPC who teach students while working for the Lab, as well as graduates of the Engineering Technology Program (also known as Vets2Tech), who described the impact of the award-winning program on their careers.

The meeting kicked off with overview presentations of the Laboratory and collaborative education programs — by LLNL University Relations and Science Education Director Eric Schwegler and Science Education Program Director Joanna Albala respectively — highlighting Lab/LPC collaborations such as workshops, the LLNL/LPC Science and Engineering Seminar Series and the Teacher Research Academy.

LPC’s Foster followed by introducing LLNL attendees to recent activities and initiatives at the college, which is currently focusing on student retention through its career pathways program, providing student support through “success teams” and job readiness through resume-building internships, and undergoing expansion, including construction of a new Advanced Manufacturing and Transportation facility.

Foster also spoke of enrollment declines the community college is facing, spurred largely by the ongoing COVID-19 pandemic. He added that he hoped to learn more about Lab programs and use the meeting as a forum to discuss how to leverage the partnership with the Lab to better serve students.

“This meeting will hopefully be a launchpad to more activities,” Foster said. “I’m excited for what the future holds.”

The coming years will see many new job openings in the Engineering Directorate, due to the increasing demand for trained U.S. citizens to meet the needs of stockpile modernization and other growing programs, said Engineering Associate Director Anup Singh. Amidst a boom in hiring, Singh spoke of the critical need for hundreds more engineers and machinists at LLNL, where the directorate is looking to community colleges to help fill the gap.

“I think it’s not about where you got the degree, it’s what you learned — that’s almost a better predictor of success than anything else,” Singh said, adding that “cutting-edge community colleges such as LPC are doing a great job of educating our future workforce.”

Singh expressed his desire to bring more LPC students into apprenticeships and increase the hiring rate from the Lab’s summer student intern population to further strengthen the “continuum” between the Lab and local community colleges. “We would like to reel them in early because we are hurting for talent, and we want to keep them here … You’ve got to start planting those seeds now.”

Engineering Superintendent Randy Pico, who recently won LPC’s prestigious 2022 Friend of the College award for encouraging pathways for community college students in science, technology, engineering and math (STEM), spoke of the success of the ETP/Vets2Tech program. The program has brought 10 veteran and civilian graduates into full-time engineering jobs at the Lab and serves as a model for similar programs nationwide. Pico said he wants to continue to “increase the pool of STEM in the area” and expand on community education efforts and existing mentoring programs.

“There are so many success stories out here and LPC plays a big role in that,” Pico said. “It just shows the strength of the partnership between the Lab and Las Positas College. We want LPC to be a bright star [for students].”

Among the proof positive examples of ETC/Vets2Tech is Logan Bekker, a Marine Corps veteran from Danville who was among the program’s first cohort. He was hired on at the lab as a mechanical engineer in 2017 and is currently pursuing a master’s degree from the University of California, Davis in mechanical/aerospace engineering.

“LPC was foundational to my career path, and my internship was that confirmation that this was what I wanted to do,” Bekker told attendees. “Had they not started this program, I wouldn’t be here today.”

Marylou Manzo, a civilian who attended Las Positas College while living in Tracy, was hired at the Lab after completing the program and has worked at LLNL for three years as a mechanical technologist.

“I wasn’t happy at first (at LPC) because I didn’t know what to do,” Manzo said. “But if I could go back, I wouldn’t change a darn thing.”

During the meeting’s discussion phase, LPC adjunct professors Peter Ray and Phillip Powell shared their experiences of teaching students while working on staff at LLNL. They, along with Laser Systems Engineering & Operations Division Superintendent Rob Campbell, expressed hopes that the college could offer more courses in growing, in-demand areas such as systems engineering and laser technology.

The discussion also centered around the impacts of the COVID-19 pandemic on the Lab workforce and student enrollment. LLNL’s Associate Director and Chief Human Capital Officer Larry Durham spoke of the need to increase talent and retention in the era of the “Great Resignation,” and related the Lab’s aspiration to build a “inclusive and equitable” culture to support a new generation of employees.

“It ends and begins with one-on-one interaction,” Durham said. “We’re looking to make investments and pivot to a culture that we may not be around to see the benefits of — and that’s OK.”

Chabot-LPC Chancellor Gerhard said COVID-19 has had a major impact on the district, which has experienced a 20 percent drop in enrollment since the start of the pandemic, with a disproportionate effect seen in historically underserved minority populations.

The district is looking to provide students with more opportunities to educate themselves in the Tri-Valley, while also drawing students from outside the immediate area, Gerhard said. In the coming year, Gerhard said he will focus on reengaging students who have left school because of COVID-19 and looking at partnerships with LLNL and others to figure out how to get them back in the classroom.

“In COVID, we’ve seen a tectonic shift in California community colleges in our core student population,” Gerhard said. “LPC is a destination spot for students because of our programs. It’s partnerships like this one that give me energy; we know there are opportunities and students out there who don’t know what they want, who are lost, and we can be a beacon for them.”

Ho said the event was an opportunity to highlight existing programs and explore new collaborative opportunities for students.

“I’m a cheerleader for the Lab and I’m excited to help reach others,” she said.