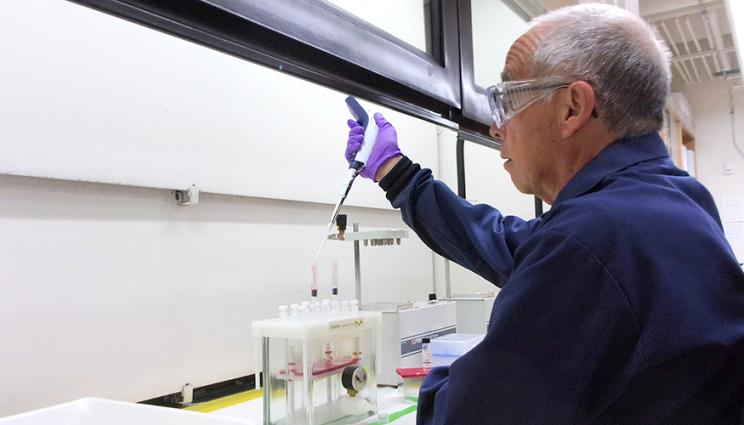 Every fall, chemists and other researchers from the FSC spend two weeks of long days undertaking the Organisation for the Prohibition of Chemical Weapons (OPCW) environmental proficiency test.

Livermore scientists have been taking the proficiency tests each October since 2001; LLNL has served as one of two United States laboratories certified to test environmental samples for chemical weapons since 2003.

To retain their OPCW certification, LLNL and other OPCW-designated laboratories must maintain a three-year rolling average of at least two “A” grades and one “B” in the ongoing tests — so each grade is important. LLNL researchers recently learned that they had received an “A” grade for the 12th consecutive year in October’s 50th OPCW proficiency test.

In the most recent OPCW proficiency tests, which ran from Oct. 25 to Nov. 8 last year, scientists and researchers at laboratories in other nations analyzed three samples of laboratory aqueous waste and three samples of organic solvent waste.

“It was another one of the very challenging proficiency tests that consisted of a realistic test scenario,” said Armando Alcaraz, the principal investigator for the Lab’s OPCW efforts since 2001. “The samples were collected under a challenge inspection of a chemical research laboratory accused of performing chemical weapons research.

“The proficiency tests are always designed to challenge the laboratories and they make them rigorous because we have to demonstrate that we are prepared to meet our Chemical Weapons Convention treaty obligations,” Alcaraz added.

FSC Director Audrey Williams noted: “The chemical analysis capability that is exercised through the OPCW proficiency tests is foundational to much of the research and real-world sample analysis we perform in the FSC.”

During last October’s test, the LLNL forensic scientists not only had to correctly identify the reportable chemicals but also were required — for the second straight year — to perform their collaborative work with added precautions because of the SARS-CoV-2 pandemic.

LLNL received its original OPCW certification in 2003. Its work is carried out by the Laboratory's FSC, which is part of the Global Security Principal Directorate and is funded by the National Nuclear Security Administration’s Office of Defense Nuclear Nonproliferation.

The OPCW oversees compliance for the Chemical Weapons Convention (CWC) treaty, which has been in force since 1997.

Under the CWC, the development, production, acquisition, stockpiling and use of chemical weapons is banned, as is the transfer of chemical-weapon-related technologies.

The samples for last October's proficiency test, taken by LLNL and 19 other laboratories around the world, were prepared by the OPCW laboratory in The Hague, Netherlands. The participating laboratories' test reports were then evaluated by DGA Maîtrise NRBC Laboratory in France.

Out of the 20 laboratories that participated in the October OPCW proficiency test, 10 earned “A” grades, three garnered “B” grades, one received a “C”, three earned a “D” and three laboratories picked up “F” grades.

Three of Livermore's “A” grades over the past 12 years have been received for serving as the OPCW's evaluation lab, grading proficiency test reports.