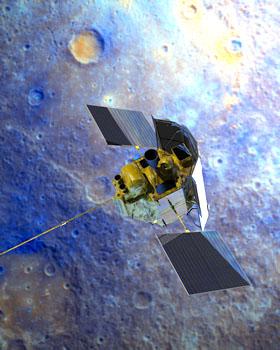 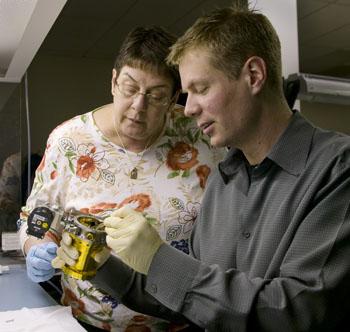 When a NASA spacecraft goes into orbit around Mercury Thursday evening, a team of Lawrence Livermore National Laboratory researchers will be paying close attention.

During 2002 and 2003, the LLNL scientists developed a germanium-based gamma ray spectrometer that has been winging its way aboard the Mercury MESSENGER (short for MErcury Surface, Space Environment, GEochemistry and Ranging) for the past six-and-half years.

If everything goes as planned, MESSENGER will start a highly elliptical orbit of Mercury at 6 p.m. (Pacific Daylight Time) Thursday, coming as close as 200 kilometers (120 miles) to the planet and as far as 15,000 kilometers (9,000 miles) away. It will be the first spacecraft to ever orbit Mercury, circling the planet every 12 hours for one year.

The MESSENGER mission is part of NASA's Discovery Program and is led by the Johns Hopkins University Applied Physics Laboratory.

"Mercury's surface is highly radioactive, so it emits a large amount of gamma rays," said LLNL physicist Morgan Burks. "By measuring the energy of the gamma rays with high resolution, it is possible to determine the composition of the planet's surface. Each element gives off a unique gamma ray signature."

It is anticipated that once the MESSENGER spacecraft starts its orbit of Mercury that it will be one to two weeks before the gamma ray spectrometer starts sending data back to Earth.

The fundamental challenge faced by LLNL researchers was to build a gamma ray spectrometer that could withstand the extreme heat radiating from Mercury's surface, as well as the heat from the sun itself, which is 11 times brighter there than at Earth.

Before this mission, it wasn't clear whether it was possible to operate a cryogenically cooled instrument near Mercury. But the team came up with a thermal and mechanical cooling design that allows the germanium crystal to live at -200 degrees Celsius while rejecting 98 percent of the infrared heat and energy from the broiling surroundings.

Before MESSENGER, only NASA's Mariner 10 spacecraft had traveled to Mercury. The spaceship performed three flybys in 1974-75 and returned the first images of Mercury to Earth. However, only 45 percent of the surface was photographed and the spacecraft contained no X-ray or gamma ray spectrometers.

Launched in August 2004, MESSENGER will completely orbit Mercury with a suite of seven instruments, including X-ray, gamma ray, neutron and charged particle spectrometers, a laser altimeter and a magnetometer.

To orbit Mercury, MESSENGER has had to follow a path through the inner solar system, including one flyby of Earth, two flybys of Venus and three flybys of Mercury.

The LLNL gamma ray spectrometer took data and has performed well multiple times, including during one of the flybys and during two deep space tests in 2004 and 2010, according to Burks.

"Despite the fact that the gamma ray spectrometer has passed every test performed on it in deep space, I think we'll all rest much easier once we see it operating well in the harsh thermal environment and orbit of Mercury," Burks said.

As the MESSENGER has journeyed toward its orbit of Mercury, an on-board heater has been used to repair radiation damage from the flight to the LLNL gamma ray spectrometer. To date, the crystal has been heated to 85 degrees Celsius (185 degrees Fahrenheit) on five occasions, annealing the germanium crystal and restoring it to an almost perfect crystalline structure.

There has long been a synergy for some scientific instruments, such as gamma ray spectrometers, for applications in outer space exploration and back on Earth for homeland security applications, such as to detect nuclear materials.

"We've taken the MESSENGER technology and used it to create the next generation hand-held gamma ray detector," he said.

The MESSENGER detector is a spinoff of the Lab's Cryo-3, a mobile hand-held mechanically cooled germanium radiation detector that can detect gamma rays from radioactive material, and was developed by Norm Madden and John Becker.

Several new LLNL radiation detectors, the GeMini and the GN-5, were designed to be about the size of a lunch box, lighter, smaller and more energy efficient than the Cryo3. Using lithium polymer batteries, the new detectors can run for 10 hours at a time, while the Cryo3 could only operate for a two-to-three hour stretch.

The GeMini and GN-5 germanium-based gamma ray spectrometers have been licensed to companies, with the GeMini is expected to go into commercial production next year.

Burks said the GeMini detector could be used at border crossings, ports, airports or anywhere else that inspectors need to check for nuclear materials, particularly plutonium or uranium. The GN-5 has been developed as a search tool, particularly for use by the Coast Guard.

High-resolution germanium-based detectors not only detect the presence of radiation, but can discriminate between benign radioactive substances, such as medical isotopes or bananas, and nuclear materials that could be used in a weapon.

"Unlike a Geiger counter, which only tells you that radioactive material is present, a germanium spectrometer will identify it," Burks said. "The readings are like a fingerprint for the material. Germanium detectors have been around for decades for use in the lab. But this instrument is so small you can carry it around in your hand."

Some of the initial engineering work for the MESSENGER detector was performed at Lawrence Berkeley National Laboratory by members of the instrument team, who later joined LLNL. Also participating in the collaboration was the UC Berkeley Space Sciences Laboratory.