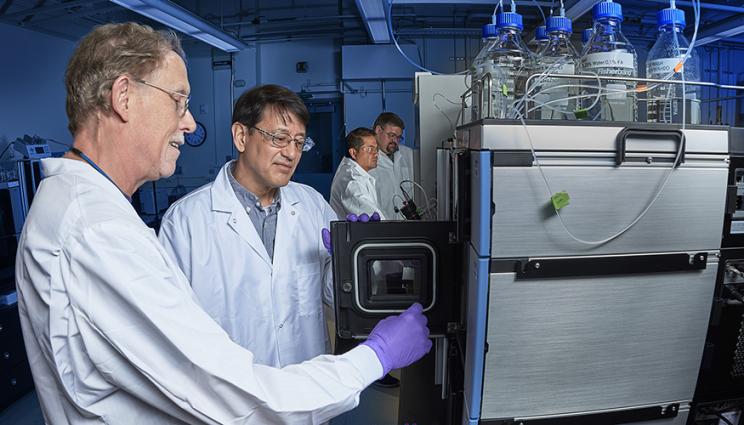 Mark Dreyer (front, left) and Roald Leif examine the injection port of the high-resolution liquid chromatography mass spectrometer right after the injection of a fentanyl sample while Carlos Valdez (back, left) and Todd Corzett monitor the analysis for the opioid. Photo by Garry McLeod/LLNL.

A team of Lawrence Livermore National Laboratory (LLNL) scientists has developed a new technique to analyze fentanyl in human blood and urine samples that could aid work in the fields of medicine and chemical forensics.

Led by Carlos Valdez, an LLNL synthetic chemist and lead author, the team discussed its new fentanyl analysis approach in a paper recently published in the San Francisco-based Public Library of Science (PLOS) One online journal.

“This technique is important because it allows a scientist to not only detect intact fentanyl in biological tissues, but it also provides a way to confirm its presence in the sample by chemically modifying the opioid,” Valdez said.

The researchers developed a new method to analyze and confirm the presence of fentanyl and a related analog, called acetyl fentanyl, in blood and urine at low levels that can still cause overdoses in people. Like fentanyl, acetyl fentanyl also is a potent opioid that has been identified in many overdose deaths in the U.S. in recent years.

Developed by a team of researchers led by Belgian scientist Paul Janssen, fentanyl has become one of the most employed opioids in the field of medicine. It is used in surgical procedures as well as for the management of pain in certain disease states.

However, the benefits of fentanyl use in medicine have been overshadowed by its use in hundreds of thousands of overdose deaths due to its illicit use, along with other similar analogs such as acetyl fentanyl.

In the LLNL experiments, researchers spiked blood and urine samples with levels of fentanyl and acetyl fentanyl found in human overdose cases. They then used an organic solvent to extract the opioid from these biological samples.

The team next treated that organic extract with a chemical reagent known as 2,2,2-trichloroethoxycarbonyl chloride, or troc chloride for short.

“The reaction between troc chloride and fentanyl breaks the compound into two predictable products from the opioid: the first one is 2-chloroethyl benzene and the second one is troc-norfentanyl, both of which are easily detectable using standard forensic science equipment,” Valdez said.

“The strength and novelty of this approach is that both products can be pieced together to identify any type of fentanyl-related substance, even unknown ones, that has been absorbed into the body,” Valdez said, adding that the method will be valuable for chemical forensics, toxicology and medical diagnoses.

Currently, other detection technologies use time-consuming and multiple analyses to identify unknown fentanyl-related substances and often have limited success, he said.

“The main advantage of our work is that it will accelerate the process by which scientists and medical personnel can clearly and more confidently identify unknown fentanyl substances,” Valdez explained.

Along with its use for blood and urine, the new fentanyl identification technique could be utilized for other biological tissues, including liver, kidney and heart tissue.