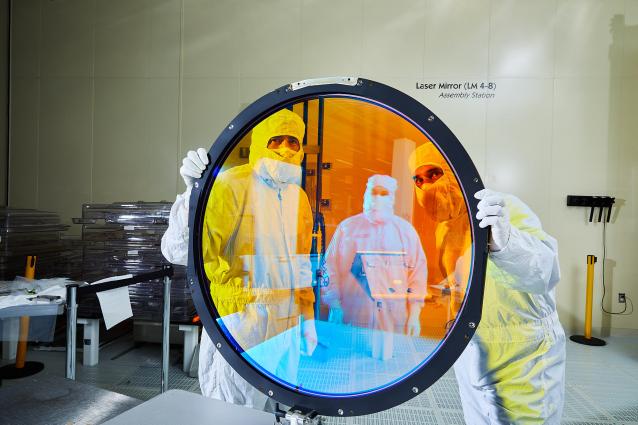 For much of the past decade, Lawrence Livermore National Laboratory (LLNL) researchers have been designing major optical components for the world’s newest telescope, while their industrial partners have fabricated the components.

Now, with the September shipment of the last of six optical filters for the telescope’s camera to the SLAC National Accelerator Laboratory in Menlo Park, the Livermore researchers have finished their work.

It is anticipated that the Vera C. Rubin Observatory facility in northern Chile, with its Legacy Survey of Space and Time Camera (LSSTCam), will start imaging the southern sky in 2024.

“We’re all very excited,” said LLNL engineer Vincent Riot, who has been the Rubin LSSTCam manager for the past four years while working at Livermore and at SLAC on special assignment.

“The optical lenses and filters have been a long time in the making," he said. "This project has been under way for about 10 years. Now, we’ll soon see the integration of all of the camera’s components as part of the telescope’s commissioning.”

In turn, the optical filters were transported to Westford, Mass.-based Materion, which coated the glass of the six filters. The East Coast company built a special chamber for coating the LSSTCam filters and also built a custom metrology station to measure the filter coatings.

First, the six LSSTCam filters are some of the largest optical filters ever produced. Second, the filters must have a stringent uniformity within about two percent. “It’s one thing to have uniformity over 2 inches; it’s another to have it over 30 inches,” Wolfe said.

“It is a complex process to get a substrate ready for coating when you have three different vendors, 18 months of preparation and an irreversible coating process if mistakes are made.”

Each filter is about 30 inches (76 centimeters) in diameter and weighs about 90 lbs., ranging in thickness from about ½ inch (13 millimeters) to one inch (26 millimeters).

The filters are labeled u, g, r, i, z and y; each transmits light from a segment of the electromagnetic spectrum, progressing throughout the entire visible range and moving from the near ultraviolet (u) to the near-infrared (y).

The r-band filter, which covers a spectral band near the center of this range, will be one of the filters used most often for the LSSTCam. It also will be particularly useful for testing the camera because standard optical techniques can be used to verify the optical performance of the camera when this filter is in place.

“As optics for large telescope systems are always a challenge, it is very gratifying to complete the work on these filters and all of the camera optical assemblies,” Wolfe said. “The team did a great job and we are all very proud to have played a role in delivering these first-of-a-kind optical assemblies.

“Optics and especially optical filters are notorious for causing significant delays in projects like this one. Given unanticipated delays the last couple of years due to the pandemic and other factors, it is a great relief to know that the optics have all been delivered in good shape in time to meet the needs of the project."

Once Materion finished coating the filters between March and September of this year, they were shipped to LLNL to be placed into Lab-designed mechanical mounts in the National Ignition Facility optical assembly building.

“We have benefitted from NIF’s state-of-the-art assembly building that offers a top-notch clean room and skilled technicians who are used to handling very large optics,” Riot said.

A key feature of the LSSTCam’s optical assemblies will be its three lenses, one of which is the world’s largest high-performance optical lens ever fabricated, at 5.1 feet (1.57 meters) in diameter. This optical lens was listed in the latest edition of Guinness World Records.

The world’s largest lens and its two companion lenses (at 1.2 meters and 72 centimeters in diameter) were shipped from LLNL to SLAC for integration into the LSSTCam in 2019. The three lenses were built between 2014 and 2019 by Boulder, Colo.-based Ball Aerospace and its subcontractor, Tucson-based Arizona Optical Systems.

SLAC is managing the overall design and fabrication, as well as the subcomponent integration and final assembly of the Rubin Observatory’s $168 million, 3,200-megapixel digital camera. In addition to SLAC and LLNL, the team building the camera includes an international collaboration of universities and labs, including the Paris-based Centre National de la Recherche Scientifique and Brookhaven National Laboratory in New York state.

"The success of the fabrication of these optical filters and assemblies is a testament to LLNL’s world-leading expertise in large optics, built on decades of experience in the construction of the world’s largest and most powerful laser systems," said physicist Scot Olivier, who helped manage Livermore’s involvement in the LSSTCam project for more than a decade.

Olivier said without the dedicated and exceptional work of LLNL optical scientists Lynn Seppala and Brian Bauman and LLNL engineers Riot, Winters and Wolfe, the LSSTCam filters and optics, including the world’s largest lens, would not be the reality they are today.

"Riot’s contributions to LSSTCam also go far beyond the camera optics — as the current overall project manager for the LSSTCam, Riot is a principal figure in the successful development of this major scientific instrument that is poised to revolutionize the field of astronomy," Olivier added.

Rubin Observatory Director Steven Kahn, a physicist at Stanford University and SLAC, noted that “LLNL has been a key partner in the development of the Rubin Observatory since the beginning of the project in the early 2000s. The Lab has made major contributions to the overall telescope design, the camera optics and the camera project management.”

Livermore’s researchers made essential contributions to the optical design of LSSTCam’s lenses and mirrors, the way LSSTCam will survey the sky, how it compensates for temperature and gravity and more.

Will observe more galaxies than people on Earth

The 8.4-meter telescope at Rubin Observatory will take digital images of the entire visible southern sky every few nights, revealing unprecedented details of the universe and helping unravel some of its greatest mysteries. During a 10-year time frame, Rubin Observatory will detect about 20 billion galaxies — the first time a telescope will observe more galaxies than there are people on Earth — and will create a time-lapse "movie" of the sky.

This data will help researchers better understand dark matter and dark energy, which together make up 95 percent of the universe, but whose makeup remains unknown, as well as study the formation of galaxies, track potentially hazardous asteroids and observe exploding stars.

The telescope’s camera — the size of a small car and weighing more than three tons — will capture full-sky images at such high resolution that it would take 1,500 high-definition television screens to display just one picture.

Construction on Rubin Observatory started in 2014 on El Peñon, a peak 8,800 feet high along the Cerro Pachón ridge in the Andes Mountains, located 220 miles north of Santiago, Chile.

Financial support for the Rubin Observatory comes from the National Science Foundation (NSF), the U.S. Department of Energy’s Office of Science and private funding raised by the LSST Corporation.

The NSF-funded Rubin Project Office for construction was established as an operating center under management of the Association of Universities for Research in Astronomy. The DOE-funded effort to build the LSSTCam is managed by the SLAC National Accelerator Laboratory.

The LSSTCam, including the three lenses and six filters designed by LLNL researchers and built by Lab industrial partners, will be shipped from SLAC to the telescope site in Chile in the summer of 2022.