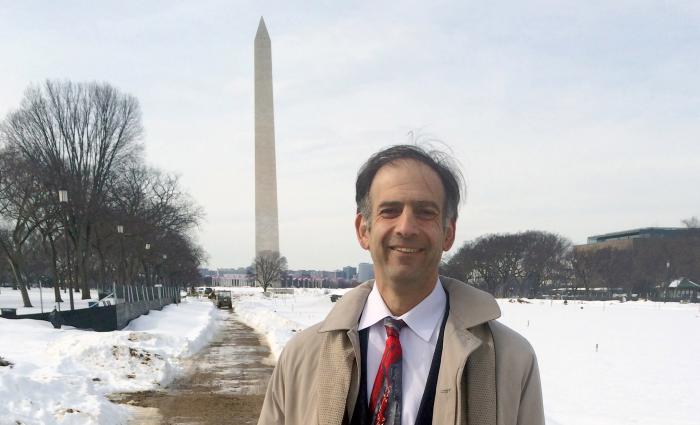 As principal deputy assistant secretary for Fossil Energy for the Department of Energy since November 2013, Julio Friedmann was on assignment in Washington, D.C., from Lawrence Livermore National Laboratory. He returned to the Laboratory in March.

Julio Friedmann never tired of seeing the monuments, memorials, the Capitol, the Mall, meetings in the West Wing of the White House and other historic buildings.

As principal deputy assistant secretary for Fossil Energy for the Department of Energy since November 2013, Friedmann was on assignment in Washington, D.C., from Lawrence Livermore National Laboratory. He returned to Livermore in March.

He was a presidential appointee and was recruited by Energy Secretary Ernest Moniz, based in part on their past work together on the MIT study, "The Future of Coal."

While Friedmann enjoyed his time in Washington, he calls Livermore his home. But he had a good reason for heading to the Capitol.

"I really cared about getting a fundamental understanding about the needs of the Lab versus the needs of the department," he said. "As an IPA (Intergovernmental Personnel Agreement) you can help in ways that are not available to Lab employees."

For example, Friedmann said Moniz regularly put teams together to think about things that "can be done."

"As an IPA you can sometimes guide that process as well as contribute to it," he said.

Friedmann earned his bachelor’s and master’s degrees in geoscience from the Massachusetts Institute of Technology and his Ph.D. from the University of Southern California. He had spent 10 years at Lawrence Livermore as chief energy technologist and director of the carbon capture program before he was called to Washington, D.C. This expertise helped him manage and redefine the research program in the Office of Fossil Energy.

During his time in Washington, he first served as deputy assistant secretary for the Clean Coal and Carbon Management Program prior to his current assignment. In his role, he headed a 140 person, $900 million dollar organization with a $630 million dollar research budget. He also helped launch a number of new cross-cutting R&D efforts at the department, including subsurface science, using supercritical CO2 in power cycles, and development of advanced water treatment technologies.

"People want core technical knowledge from Lab people on IPAs," Friedmann said. "There is plenty of demand for deep knowledge and good ideas."

His work in fossil energy took him to Washington, D.C., Germantown, Maryland and to the three National Energy Technology Laboratory (NETL) sites in Morgantown, West Virginia; Pittsburgh and Albany, Oregon.

Friedmann also formally represented the U.S. government to four other nations (including China and Saudi Arabia), helped lead the joint U.S.-Iraqi coordination team, contributed to the Paris negotiations on climate change, and was asked by the White House to work with the Office of Management and Budget (OMB), the Treasury Department and other agencies on a tax credit proposal dealing with carbon capture and storage. This work contributed to a $5 billion dollar proposal for carbon capture and storage tax credit in the president's FY2016 budget.

He now serves as the senior adviser for Energy Innovation at the Lab and is working with Deputy Director for S&T Pat Falcone, Global Security and the Director’s Office on Mission Innovation, a flagship initiative by Secretary Moniz to dramatically accelerate the development and deployment of clean energy through a doubling of the DOE’s R&D budget.

While he enjoyed his time on assignment, Friedmann returned to the Lab this March and brought back some experiences of a lifetime.

"I believe that the understanding of government needs gained from my IPA experience will allow me to better serve the Lab," he said.