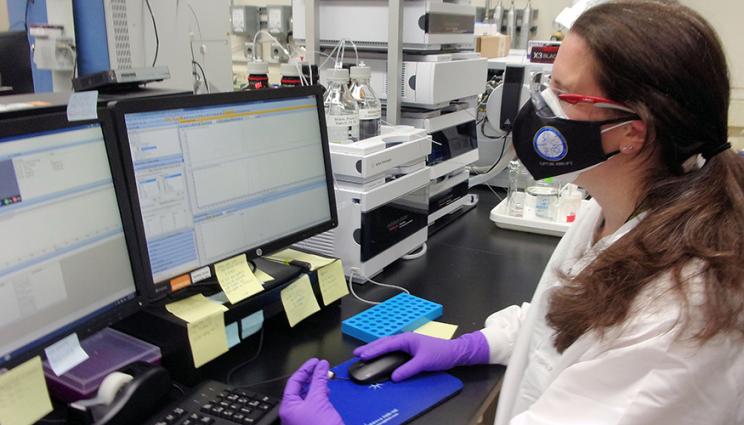 It wasn’t an easy road, but Lawrence Livermore National Laboratory (LLNL) Forensic Science Center scientists earned an “A” grade in the Organisation for the Prohibition of Chemical Weapons’ (OPCW) recent biomedical proficiency test.

In addition to the usual complexity of the sample preparations and analysis, the Livermore scientists received their proficiency test samples a week late because of bad weather and COVID-19 delays in the eastern United States.

“What added to our angst was that we didn’t know if the samples were degrading with time,” said Armando Alcaraz, the principal investigator for the Lab’s OPCW work since 2001. “Even with the delivery delay, the LLNL team did a great job and received the top grade for the 6th OPCW Biomedical Proficiency Test (BioPT).”

LLNL has been an OPCW biomedical designated lab since 2016 and has earned six straight “A” grades. In addition, LLNL has been one of two United States laboratories certified to test for chemical weapons in environmental samples since 2003, taking environmental proficiency tests each year.

To retain the OPCW biomedical designation, labs are required to pass one BioPT per year and maintain two “A” grades or one “A” and one “B” on the two most recent consecutive tests.

In addition to LLNL, there are three other U.S. designated labs for processing biomedical samples: the U.S. Army Combat Capabilities Development Command Chemical Biological Center, the U.S. Army Medical Research Institute of Chemical Defense and the Centers for Disease Control and Prevention.

In June, the LLNL team learned that it had identified all four reportable chemical weapon blistering agent biomarkers in the BioPT plasma and urine test samples. These human biomedical samples contained reportable sulfur mustard plasma adducts or urine metabolites at 40 to 60 parts per billion.

The collected biomedical samples were analyzed for the presence or absence of unique chemical weapons biomarkers in plasma and urine using validated analytical methodologies implemented by OPCW biomedical designated laboratories.

The scenario for the March 8-22 test involved an explosion in a residential neighborhood. Several hours later, family members who lived in the area showed signs of exposure to a chemical warfare blister agent and were hospitalized. A fact-finding team from the OPCW deployed and collected urine samples.

The samples for the March BioPT, taken by LLNL and 16 other laboratories around the world, were prepared by the Laboratory of Chemical Analytical Control and the Biotesting Research Institute of Hygiene and Occupational Pathology and Human Oncology in Leningrad, Russia. In turn, the participating laboratories' test reports were then evaluated by the Laboratory of Analytical Chemistry, Research Institute of Chemical Defense in Beijing, China.

Out of the 17 laboratories that participated in the March BioPT, 12 earned “A” grades, one received a “B” and four received “C” grades.