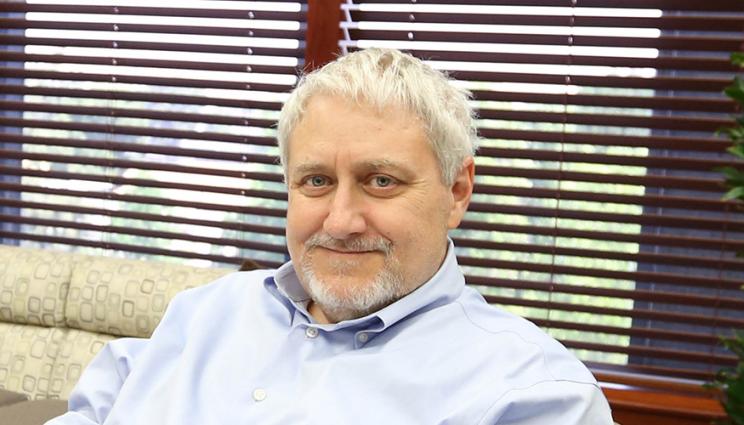 Goldstein was named the 12th director of the Lab and the third president of LLNS on March 31, 2014. LLNS manages the Laboratory for the Department of Energy/National Nuclear Security Administration. A national search for the next Laboratory director will be led by the University of California for the LLNS partnership.

“It is an immense honor to serve as director of this unique, exceptional institution,” Goldstein said. “I have been privileged throughout my career to work alongside great scientists, engineers, technicians and administrators who have devoted their estimable talents to our critical missions. The Lab has demonstrated again and again its ability to contribute to solving the biggest problems, and I am confident it will continue to serve the nation with new ideas.”

Goldstein will step down after more than 36 years at the Lab, starting in the Physics Directorate working on diverse national security and science programs before taking on roles of increasing responsibility in senior management.

“Bill always has approached everything he does at the Lab with diligence and intelligence,” said U.S. Department of Energy’s Under Secretary for Nuclear Security and NNSA Administrator Lisa E. Gordon-Hagerty, a former colleague of Goldstein’s. Gordon-Hagerty worked at LLNL prior to joining the federal government. “Bill’s passion for the Lab’s missions and his dedication to the workforce are unquestionable. We thank him for his service to this nation.”

“Bill’s scientific leadership, coupled with his senior management experience across a broad range of programs and his enthusiasm for the Lab’s mission and its people made him the ideal director,” said Charlene Zettel, LLNS board chair. “He is respected and trusted not only among the Laboratory’s leaders and its workforce, but across the halls of DOE, NNSA and other government sponsors, as well as the Lab’s academic and industrial partners.” See letter from Zettel.

Goldstein’s announcement comes at a time of unprecedented growth across every facet of the Laboratory, from research and development to workforce and budget. At the time he was appointed director, the Lab stood at approximately 6,000 employees with a $1.5 billion budget. Today, the Lab’s workforce numbers 7,400 employees (and growing) and a $2.3 billion budget.

During his tenure, the Lab was named the lead in two critical life extension programs; acquired several of the world’s fastest supercomputers, including the exascale-capable El Capitan; became a leader in additive manufacturing; developed and constructed the High-Repetition-Rate Advanced Petawatt Laser System (HAPLS, the world’s most advanced and highest average power diode-pumped laser); provided the optical assemblies, one of them the world largest optical lens ever assembled, for the Large Synoptic Survey Telescope; and published “Getting to Neutral,” a groundbreaking study on how California could achieve carbon neutrality. Research on the National Ignition Facility, the world’s most energetic laser, also made significant progress toward fusion ignition while providing insight into stockpile science that could not be achieved through previous weapons testing.

Improvements were made to safety and security across the main site as well as Site 300, including a revamp of Work Planning and Controls, while the Lab saw growth in on-site construction of new facilities as well as improvements to infrastructure.

Goldstein also steered the Lab through the workforce challenges brought on by the COVID-19 pandemic. Despite more than three quarters of the workforce telecommuting, Goldstein and the senior management team paved the way for the Lab to make key contributions in the fight against the disease, including emergency ventilators fabricated from off-the-shelf parts; using additive manufacturing as a viable option for fabricating nasal swabs; studying ways to reuse protective masks and face coverings; development of diagnostics for COVID-19 testing; and providing predicted structures of a key COVID-19 viral protein to help the research community accelerate development of potential medical treatments.

Prior to being named director, Goldstein served as the deputy director for Science and Technology at LLNL, where he was tasked with leading the strategic deployment of the Laboratory's science and technology capabilities, taking line responsibility for the institutional roadmap portfolio, including the Laboratory Directed Research and Development Program, collaborative research with academia and private industry and institutional planning activities.

Before he was named deputy director, he was the associate director of Physical and Life Sciences, where he had responsibility for a broad range of scientific research and development; medical physics and biophysics; chemistry; optical sciences and instrumentation; and high-energy-density physics.

He has been a strong individual contributor to stockpile stewardship, generating data that underlies advanced codes and simulations. In 1997, he established and led the Physical Data Research Program that had responsibility for refining and validating the physics models used by the Lab for its missions. Goldstein led the creation of the Jupiter Laser Facility and, in 2006, oversaw completion of Titan, a unique new Jupiter Laser Facility capability.

Goldstein began his career as a postdoctoral research associate with the Theoretical Physics Group at the Stanford Linear Accelerator Center. He received his doctorate in theoretical physics from Columbia University in New York and a bachelor's degree in physics from Swarthmore College in Pennsylvania. He is a fellow of the American Physical Society, and the American Association for the Advancement of Science. He has received numerous awards and has authored or co-authored more than 70 papers in the fields of elementary particle theory, nuclear physics, atomic physics, X-ray physics and plasma spectroscopy.