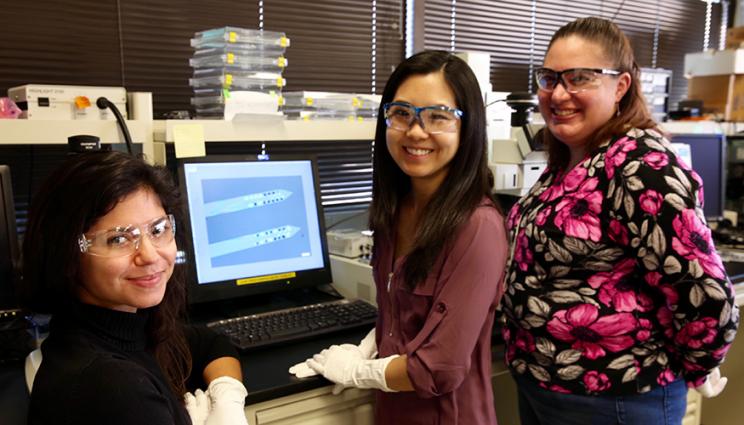 Lawrence Livermore National Laboratory researchers (from left) Jeanie Pebbles, Allison Yorita and Angela Tooker are part of a team focused on developing advanced microelectrodes to record electrical activity from individual neurons. The team hopes the work will lead to a better understanding of how neurons communicate, how the brain learns and functions, and gain insights into treatments for brain disorders.

Thin-film microelectrode arrays produced at Lawrence Livermore National Laboratory (LLNL) have enabled development of an automated system to sort brain activity by individual neurons, a technology that could open the door to recording and analyzing unprecedented amounts of neural signals over time, and, ultimately, provide scientists with new clues about how the brain learns and communicates.

The work, part of a joint project between the University of San Francisco (UCSF), LLNL and the Flatiron Institute, featured contributions from several current and former LLNL researchers over the past six years. Utilizing a flexible neural probe initially developed at the Lab for an artificial retina and improved and adapted to several brain-related projects, a team led by UCSF neuroscience professor Loren Frank created an algorithm and open-source software suite called "MountainSort," capable of automatically sorting the "spiking" signatures of neural activity picked up by the implanted electrodes. The work was recently featured in the journal Neuron. 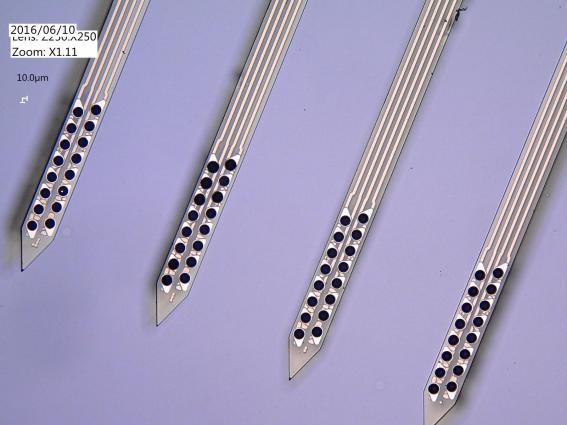 "Fundamentally, we want to answer the question, 'How does the brain work?' " said LLNL scientist Angela Tooker, a co-author on the paper. "In order to find out how the brain learns or forms memories, you need to be able to see changes in the brain and have the ability to record activity over long periods of time. To really understand all the communication pathways in different regions of the brain, five-minute recordings aren’t going to be able to cut it. We want to get a lot of data on a small area and see how the neurons are communicating. If you had to manually sort it, it would really limit the number of electrodes and how long you can look at changes in the brain over time. It’s just not something anyone can do by hand."

Typically, researchers manually assign recordings of brain activity to individual neurons by determining which "spikes"-- visualizations of the neurons’ potential energy – are coming from which cells, a tedious and time-consuming process. Microelectrodes are increasingly able to detect background noise from hundreds of distant neurons, and when they fire simultaneously, it also can lead to overlapping spikes. For these reasons, most laboratories rely on manual sorting; even when sorting algorithms are implemented, a human must select which clusters to reject, merge or split. As large electrode arrays reach higher and higher densities -- up to hundreds of channels of information -- manual spike sorting of these new massive datasets is becoming an impossible task for humans.

Utilizing 32- and 64-channel neural probes developed and designed jointly by LLNL and UCSF, along with the MountainSort software, Frank and his research team were able to demonstrate very long-lasting recordings of spikes from a large number of single neurons in lab rats, collecting information from about 1.1 million neural events per hour. Frank, the project’s principal investigator, said the results could not have been achievable without the advanced microelectrodes.

"The electrodes make it possible for us to record from many more neurons and for much longer time periods than we could previously, and the development of the electrodes made it absolutely critical to develop better spike-sorting methods," Frank said. "The electrodes themselves have the characteristics necessary to enable this sort of spike sorting, in that they have closely spaced contacts such that different contacts can detect signals from the same neuron, allowing us to do a sort of triangulation to determine which spikes came from which sources."

Incorporating a clustering algorithm called ISO-SPLIT, MountainSort can separate the neural signals from the background noise and decide which clusters should be included and which ones can be tossed out. Researchers said MountainSort performed better than humans at sorting the spikes, despite complex noise events from muscle and movement, finding it "highly likely that MountainSort can more reliably separate clusters than could a human operator." When applied to a 128-chanelled dataset, MountainSort identified more than 99 percent of the high-amplitude spikes.

Compared with two other popular spike-sorting algorithms, researchers found MountainSort performed not only faster, but also was consistently more accurate, displaying error rates equal to or better than existing manual or semi-manual approaches. The software is scalable too, they reported, suggesting as many as 320 channels from the same electrode array could be sorted in real time.

"Data processing will be an issue," Haque said. "But now that MountainSort exists, there will be more technology pull. As you solve each of these pieces of the puzzle, and data processing is part of the puzzle, we’re going to start seeing what the next problem is to solve."

While Haque said the microelectrodes in the recent study performed with a noted lack of "drift" (spike anomalies resulting from movement of the electrodes on tissue or cell migrations) attributed to the flexible nature of the LLNL probes, the researchers concluded more work would be needed to address drift and overlapping signals.

The project was funded by the UC Office of the President and the National Institutes of Health. Researchers have made MountainSort freely available on GitHub.

Visit the web for further information on neurotech at LLNL.