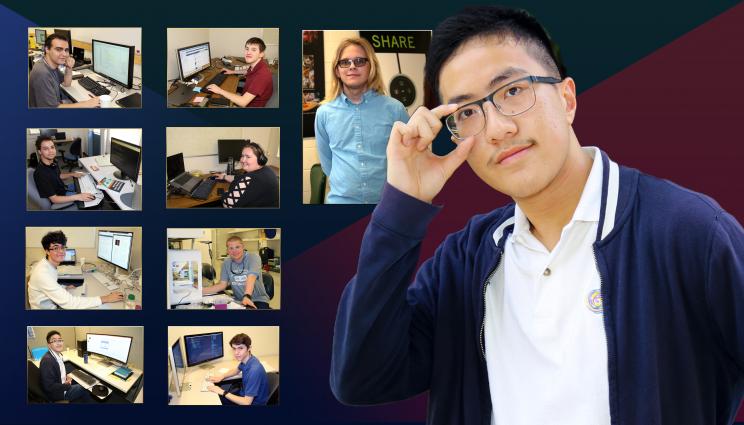 Lawrence Livermore National Laboratory (LLNL) has made big headway toward becoming an employer that embraces neurodiversity with hopes that through a successful internship program, neurodivergent individuals will look to LLNL as an employer of choice.

To celebrate the Neurodiversity Initiative, an internship collaboration with Orion Academy and the California Regional Centers, LLNL recently hosted a half-day celebration highlighting the contributions of 18 summer interns from the East Bay Regional Center, as well as their mentors and Regional Center sponsors. See photo gallery.

This new collaboration establishes programs to attract, build and maintain a specialized workforce into the future, as a model for other institutions. By cultivating and harnessing the talents of neurodivergent individuals, employers like LLNL will be able to meet the growing need for talent with a surge in productivity, innovation and creativity. The goal is to develop an identified neurodivergent population of career staff that will contribute to mission success, accomplished by developing methods for non-traditional preparation and learning pathways to effectively transition neurodivergent individuals into the workforce.

The program at the Laboratory began several years ago when a few Laboratory employees came together and conceived an internship opportunity for neurodivergent high school students. This led to the creation of LLNL’s Abilities Champions Employee Resource Group, whose mission is to promote the inclusion of interns and employees with physical, psychological, developmental and neurocognitive differences as valuable contributors to the Laboratory’s mission. The Abilities Champions core members include Lab employees Chris Brannan, Vicki Bender, Sharon Bobbitt, Christopher Campbell, Cong Chen, Brian Giera, Christine Hartman, Susan Lowder and Avraham Thomas. Together, they look for ways to bring awareness of and promote neurodiversity in the workplace.

After several years of successful summer internships, the Abilities Champions’ mission has expanded to include a collaboration with author/speaker John Elder Robison and other outreach efforts.

“We are dedicated to appreciating differences in individuals and using that power that individuality brings in driving innovation at the Laboratory,” said Campbell, Abilities Champions member and chair of the event.

Attendees at the celebration included students, their parents and caseworkers, LLNL senior management and mentors and members of the LLNL Abilities Champions, as well as supporters who drove the bill for California to receive the funding for similar programs. The event served as the kickoff for the Neurodiversity Roundtable collaboration with UC Davis, Stanford University, Cal State East Bay and other national laboratories

“It was so informative, and all the speakers were great,” said attendee Janet Mayeux from the Alta California Regional Center (ACRC). "I hope ACRC can continue to collaborate with LLNL for paid internship programs.”

The event concluded with a reception and poster session where students shared the details of their work while at the Laboratory. Matthew Bender, a 2019 neurodivergent intern who graduated from UC Davis with a bachelor’s degree in psychology, presented a report that analyzes the current climate of diversity and inclusion at LLNL. He also wrote an introductory article to neurodiversity that is available for distribution.

“While my career goals include making lots of money, I know how hard it can be to get used to life in general when on the autism spectrum,” Bender said. “It bothers me to know how many other children are not as fortunate as I was, so I would like to fix that.”

“We are grateful to the Laboratory for being the ideal environment for a program like ours, where competence, dedication, genius and kindness provide the foundation for expanding neurodiversity and recognizing the contribution that differences can make,” said Bobbitt, group leader of the Compliance and Controls Organization in the Finance Department and Abilities Champions co-founder. “The unemployment rate for adults on the spectrum exceeds 80 percent. We are proud that we have been able to accomplish so much in a short time thanks to the wonderful people at the Lab who have volunteered to be mentors, and thanks to our partnerships with Orion Academy and the state’s regional centers. It is gratifying being able to help the Laboratory find new sources of talent and to give the interns a real chance to demonstrate their gifts in a challenging environment.”