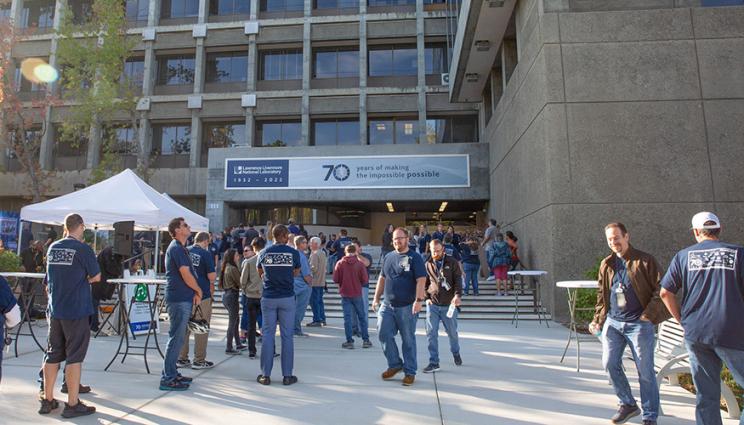 On Tuesday, Oct. 11, more than 5,000 Lawrence Livermore National Laboratory (LLNL) employees gathered to celebrate the Lab’s 70th anniversary. Throughout the first-ever Employee Engagement Day, dozens of the Lab’s facilities and programs opened their doors for employees to get a close-up look at LLNL’s cutting-edge science and technology. It was a celebration of making the impossible possible, bringing a huge number of Lab colleagues on-site together at the same time for the first time in years.

LLNL’s one-square-mile footprint was abuzz all day with tours of key capabilities, historical displays and films, live music, food and drink, photo booths, open houses and more. Attendees could complete a scavenger hunt for prizes, see a LEGO city simulation and watch an unmanned vehicle swarm demonstration in a single day. But most importantly, nearly everyone felt excited to be amongst their colleagues again after years of disruptions.

“I feel like I’m in Disneyland,” said Health Services Administrator Debra Darden during the midday Barbecue Bonanza. “I have never seen so many people on-site.” Just a few feet from Darden, attendees visited with representatives from a wide variety of the Lab’s Employee Resource Groups (ERGs) and bowled a giant ball toward four-foot duckpins.

Following a set by bluegrass band Crawdad Republic, LLNL Director Kim Budil addressed the crowd. "The things you’re getting to see today aren’t things that are normally accessible to everybody,” she said, “so it’s very exciting to me for you to get a view into the incredible breadth and depth of our expertise and our contributions to national security.” Budil wore a custom flight suit for the occasion, emblazoned with countless patches, each depicting one of the Lab’s programs and capabilities.

As befitting the ambitious plans for her tenure as director, Budil concluded her speech with a challenge: “I hope you’ve learned something new, I hope you’ve been somewhere you’ve never been before and I hope you meet at least 20 new people,” she said.

“It’s an exciting day,” said Janis Parenti, acting manager for the National Nuclear Security Administration’s Livermore Field Office, who said she has been involved with nearly half of the Lab’s 70 years. “Enjoy the day and be proud of the contributions you’ve made to this nation.”

Software developer Ryan Forsyth was working at the booth for LLNL Pride as numerous new employees came by to ask questions, take Safe Zone cards and read pamphlets. “We want to make sure people know there are safe spaces,” he said, “so employees are educated and sensitive.”

“Lots of early-career employees started during COVID,” said Early Career Employees ERG co-chair Lynda Tesillo. “Now’s their chance to see what the Lab has to offer.”

“[Employee Engagement Day is] great for me as a new employee,” said Sierra Wanden at the Livermore Laboratory Women’s Association booth. “I took a tour at NIF this morning; it was really exciting. It’s a great opportunity to learn more about what we do at the Lab.”

“It is always cool to see the stuff you never get to see but wonder about,” said Nathan Masters, a computer scientist at LLNL’s Center for Applied Scientific Computing.

CaT Vogen, who manages tours for the National Ignition Facility (NIF), was taking it all in from an information booth. “After not seeing so many people for such a long time, it’s great,” she said. “I love this.”

Across the lake from the barbecue at the center of LLNL’s campus, tours were moving along the supercomputers run by Livermore Computing. Blue light glowed from the refrigerator-sized cabinets of Sierra, the world’s fifth-fastest supercomputer, while the whole room whirred along with hundreds of petaFLOPs in computing power.

“People hear lots of noise, but what does it all mean?” said Computing volunteer Geoff Cleary, pointing toward Sierra. “The codes are what’s pushing this thing full-tilt, so the dynamic part is the part you can’t see. But that’s why we’re here to talk about it.”

Many of the visitors were Lab scientists entering the facility for the first time; most of them either wanted to see the machines that were running code for their experiments, or the machines that are storing their data, according to Debbie Morford, group leader for data storage.

For employees at NIF, Employee Engagement Day was their first opportunity to share — in-person, with the whole Lab — 2021’s historic 1.3 megajoule shot that put LLNL on the verge of fusion ignition. One NIF employee called the day the “ignition party” they hadn’t yet been able to throw.

“NIF has been a flagship facility for the Lab for a long time — now even more so,” said Felicie Albert, deputy director for the Lab’s High Energy Density Science Center. “I can sense a lot of enthusiasm. We’re very proud to show what we do; we’re part of a big family.”

At one of the Lab’s newest facilities, the Advanced Manufacturing Laboratory, volunteers were fielding both in-depth questions from seasoned researchers as well as general questions from the more broadly curious.

“People are happy to get out of their own field and learn new things,” said mechanical engineer William Smith, who was showcasing one of the AML’s directed-energy 3D printers.

Arianna Reay and Matthew Cable had been to the AML before but appreciated returning on a day when each station was staffed and ready for “very specific questions,” she said. Earlier in the day, Reay had been on a tour of the High Explosives Applications Facility (HEAF), where her questions led to a surprise answer.

“They had a solution to a problem we had,” Reay said. “You wouldn’t necessarily think to ask HEAF,” added Cable, “but there’s unexpected overlap.”

“We both came away with a much bigger appreciation for the work of the Lab,”  Reay said. “The puzzle pieces are clicking into place.”

As the day drew to a close, Budil reflected on the successful event. “My favorite part of today was walking around and meeting people,” she said. “I met thousands, probably, everywhere I went, which was great. It was a chance to really reconnect with what makes this place so great — the heartbeat of the Lab.”

To learn more about the Employee Engagement Day, view the event Flickr album. Personal commemorative photos will be published on the 70th anniversary website in coming days; watch Newsline for details.