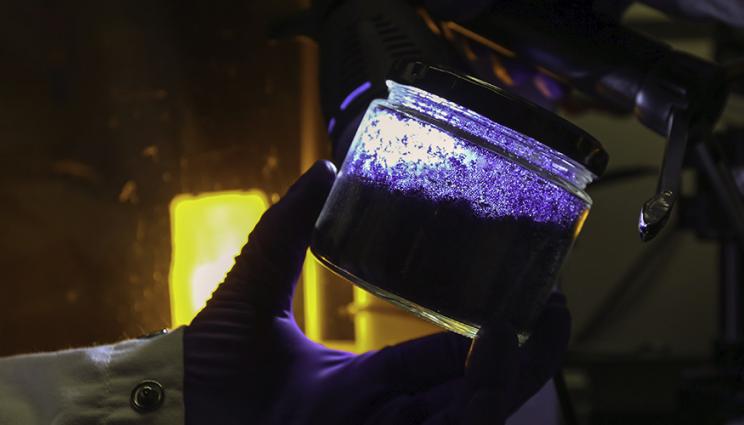 In 2016 and 2017, the first two years of the TCF program, Lab scientists and engineers received only two of the larger cooperative development grants – one each year.

"Our strategy for this year was to move up the food chain," said Rich Rankin, the head of the Lab’s Innovation and Partnerships Office (IPO). "We wanted to win more of the cooperative development grants, which are the larger funded amounts and connect us more directly to industry."

Under the TCF program, the national labs can seek two types of grants.

One is a tech maturation grant, which provides $100,000 to $150,000, does not require the involvement of an industrial partner and is focused toward the maturation of the technologies. The other grant, known as a cooperative development project, nets $250,000 to $750,000, requires the direct involvement and matching funds from an industrial partner and is aimed more directly at commercialization.

"To me, this is a significant win for the Laboratory," Rankin said. "We're excited about this because the TCF investments can help significantly in the commercialization of technology.

"It's also exciting because the National Nuclear Security Administration (NNSA) invests a great deal of money in our national security missions. These awards show that NNSA investments are yielding dividends for the nation in other areas. Bottom line, everyone in the country relies on and benefits from our nation's energy systems," Rankin added.

All five of the TCF grants are provided through the DOE Office of Technology Transitions.

The federal grants must be matched with an equal amount of non-federal money. Each of the three cooperative development projects will receive in-kind matching support from industrial partners, while LLNL will provide matches for the two tech maturation grants by using IPO licensing and royalty funds.

"All of these awards draw on deep core capabilities of the Lab and have been applied to various national security problems with technology spinoffs that have strong potential to aid the competitiveness and creativity of U.S. industry."

Earth Battery integrates fossil and renewable energy resources: Last year, the Earth Battery technology under development by Lab scientists received a TCF tech maturation grant. The concept has come a long way in the past 12 months.

The Earth Battery’s goal is to enable increased use of intermittent renewable energy without relying on backup power plants that emit carbon dioxide. It uses porous sedimentary rock, such as sandstone, to store energy when there is too much electricity on the grid, and to return that energy to the grid when there is not enough electricity. The Earth Battery will have two storage zones – one for carbon dioxide or air, and the second for hot brine.

Under the two-year project, the team will look for mature oil and gas production sites that could be used as Earth Battery sites in the U.S. and Canada, along with developing a pilot test design and commercialization pathway. Tom Buscheck, an earth scientist in the Atmospheric, Earth and Energy Division of Physical and Life Sciences (PLS), leads the team.

The market for metal additively manufactured (AM) parts is expected to hit $6 billion within the next decade, with key sectors such as transportation, aerospace and medical device manufacturing, where part quality is critical.

While AM offers many benefits to manufacturers, including speed and adaptability, it can be costly and time consuming to ensure the quality of complex parts using AM. To accelerate part qualification for metal AM, it is important to develop a science-based, automated approach to process control that can be used on the factory floor. 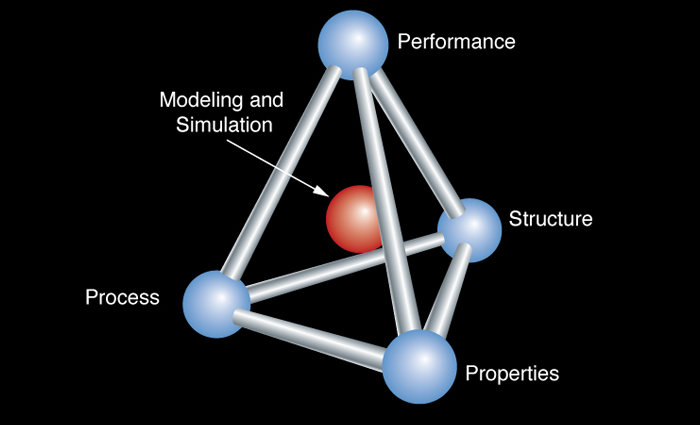 It is hoped the partnership can develop a precise 3D map of input parameters, such as laser power, speed and beam size, that is known as intelligent feed forward (IFF) control. The team plans to develop an IFF hardware/software package for current and future GE metal AM machines.

The principal investigators for the project are Wayne King, a materials scientist, and Ibo Matthews, a physicist, both in the Materials Science Division of PLS; and Prabhjot Singh of GE. The TCF grant is for $743,000 and GE will furnish a similar amount of in-kind services.

Using microencapsulated sorbents to purify the air: Lab researchers will collaborate with Artveoli, a Silicon Valley company, to integrate the Lab’s microencapsulated CO2 sorbents (MECS) into the firm’s air purification systems that capture and convert carbon dioxide into oxygen for closed environments, such as schools and office buildings.

One of the key objectives under the two-year, $630,000 TCF grant is to demonstrate the first commercial application of MECS, which easily concentrate, store and manage carbon dioxide.

Instead of simply filtering out particles, like traditional air purification systems, the Artveoli air panel captures excess carbon dioxide from indoor air, and then converts it to oxygen through a photosynthesis process using live algae. With the TCF grant, the team will integrate MECS into Artveoli’s carbon dioxide conversion bio-chips in an effort to improve the system’s performance and energy efficiency. 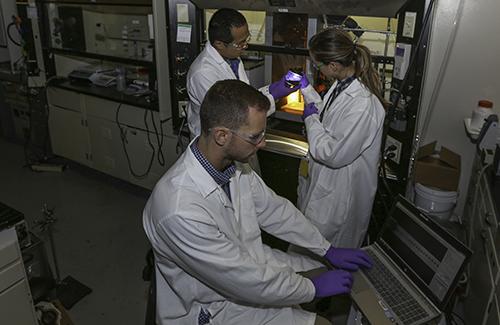 This project also allows the team to further develop the In-air Drop Encapsulation Apparatus (IDEA), which is a recent invention that produces high-fidelity capsules with orders of magnitude improvement in production rates. This tool also saves 80 percent to 99 percent of material waste compared to traditional encapsulation methods.

Congwang Ye, a materials engineer in Engineering’s Materials Engineering Division, is the project’s principal investigator. Work on the project will be done in the Lab’s new Advanced Manufacturing Laboratory. Artveoli will match the TCF grant with in-kind contributions.

New amplifier could improve electrical grid reliability:  Lab laser researchers have developed a neodymium-doped fiber amplifier that could help meet the telecommunication industry’s need for a bigger and faster bandwidth for internet users by doubling the information-carrying capacity of fiber-optic cables.

This innovation could enable a future smart grid with the bandwidth to support high-resolution data collection of power flows through the grid and enable advanced cybersecurity measures to be constructed with existing fiber optic transmission lines using spectrum not currently employed by the standard telecommunicationsnetwork.

"The Livermore team discovered that a filtering microstructure could promote significant positive optical gain from 1,390 nanometers to 1,460 nanometers and this new fiber generates laser power and optical gain with relatively good efficiency.  This discovery opens the potential for installed optical fibers to operate in a transmission region known as E-band, in addition to the C and L bands where they operate – effectively doubling a single optical fiber’s information-carrying potential. 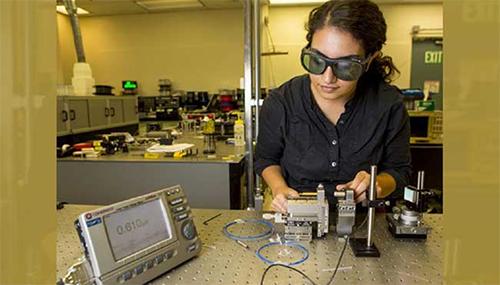 "The ‘neodymium-doped fiber amplifier and laser’ technology is one of those true breakthrough developments that have the potential for global impact by opening up new internet telecommunication bandwidth options that don’t require laying more cable," said David Dawes of the Lab’s Innovation and Partnerships Office.

Under the one-year, $150,000 TCF grant, one of the team’s key tasks will be to build a prototype that is fully compatible with existing telecommunication architectures.  Leily Kiani, a physicist in the NIF and Photon Science Directorate, is the project’s principal investigator.

Known as NanoDeposit, the technique uses electric fields to deposit films of highly ordered nanocrystal superlattices directly onto patterned substrates, exactly where they are needed. 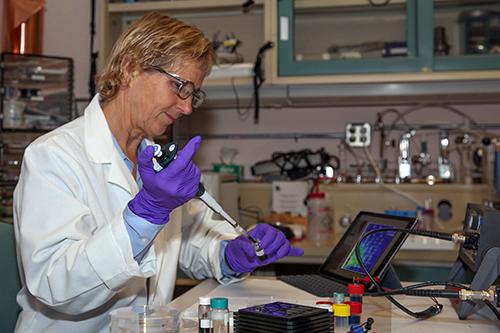 Under a one-year, $150,000 TCF tech maturation grant, the Lab researchers will partner with Beaverton, Oregon-based Voxtel Nano, a company that makes infrared imagers, to conduct pilot testing of the Lab nanocrystal manufacturing process.

The major tasks of the grant are to demonstrate that the Lab technology can deposit well-ordered nanocrystal films with a controllable thickness in the size and range so that such the films improve device performance.

Nanocrystals are tiny crystals that are promising building blocks for new and improved electronic devices, due to their size-tunable properties and ability to integrate into devices at low cost. Nanocrystals can be used for infrared detectors, solar cells and displays. Christine Orme, a physicist in PLS’ Materials Science Division, is the project’s principal investigator.