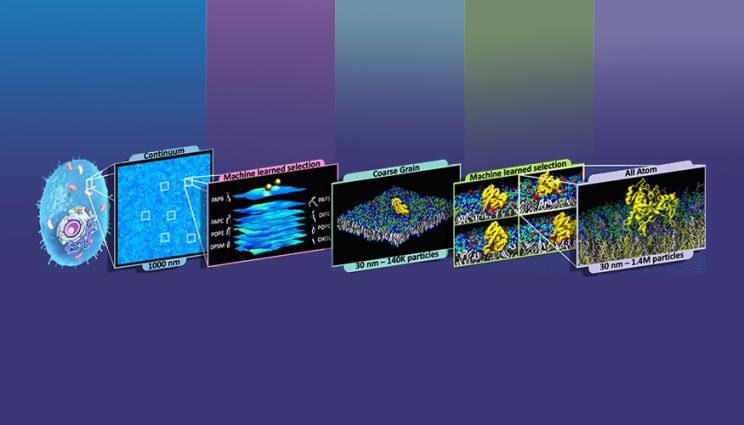 Lawrence Livermore National Laboratory researchers will use their recently awarded cycles on the world’s first exascale system — Frontier at Oak Ridge National Laboratory — to advance their work applying their Multiscale Machine-Learned Modeling Infrastructure computing framework and artificial intelligence to model and predict how RAS and RAF proteins interact with each other and with lipids on a realistic cell membrane.

A Lawrence Livermore National Laboratory (LLNL) team will be among the first researchers to perform work on the world’s first exascale supercomputer — Oak Ridge National Laboratory’s Frontier — when they use the system to model cancer-causing protein mutations.

The program recently announced new funding for 45 scientific projects at universities, industry and government agencies, totaling 18 million node‐hours. The projects will use compute cycles at Lawrence Berkeley National Laboratory’s National Energy Research Scientific Computing Center (NERSC) and the Leadership Computing Facilities at Argonne and Oak Ridge national laboratories, including early access to a few select projects on Frontier. The projects, with applications ranging from advanced energy systems to climate change and cancer research, will use DOE supercomputers to uncover unique insights about scientific problems that would otherwise be impossible to solve using experimental approaches, according to a DOE announcement.

Over the next year, Bhatia and his team will use the cycles to advance their previous work, applying their Multiscale Machine-Learned Modeling Infrastructure (MuMMI) computing framework and artificial intelligence (AI) to model and predict how RAS and RAF proteins interact with each other and with lipids on a realistic cell membrane. Through the ADMIRRAL (AI-Driven Multiscale Investigation of RAS-RAF Activation Lifecycle) project, the researchers hope to gain an understanding of how the proteins mutate and cause tumors to form. Mutations in RAS are linked to about a third of all cancers, including pancreatic, colorectal and lung cancer.

Lab researchers said exascale computing will have a tremendous impact on understanding the mechanisms of cancer at scales and details not possible before, ultimately helping the cancer research community counter those mechanisms through new drug-discovery efforts.

“Cancers are among the top threats to human life, and for cancer research to be among the first few scientific applications on the first exascale machine is both a necessary and a fitting match,” Bhatia said. “We are thankful for the opportunity to utilize the biggest tool in the arsenal for one of the most challenging problems of our times.”

LLNL computational biologist Helgi Ingólfsson added that the team is excited to expand and demonstrate their MUMMI framework on Frontier.

“Addressing the needs of exascale — scalability and throughput, effective use of heterogenous resources and AI-driven simulations — are all challenges that will be useful even beyond our current work on cancer research and could translate to other important applications,” Ingólfsson said.

The ongoing research is part of a pilot project of the Joint Design of Advanced Computing Solutions for Cancer collaboration between DOE, the National Cancer Institute’s (NCI) Frederick National Laboratory for Cancer Research (FNLCR) and the Cancer Moonshot. The team’s earlier work using the entire Sierra system at LLNL to model protein-lipid interactions of micro- and macroscales, won them a best paper award at the 2019 Supercomputing Conference. More recently, using a prior ALCC grant on Summit, the team published a more detailed multidimensional model, revealing the importance of lipids to the signaling dynamics of RAS.

The LLNL project was one of only two that were awarded early access to Frontier — the other being General Electric, for a project on turbomachine simulations to further advance clean energy, according to DOE.

One of several allocation programs for ASCR, the ALCC program will make up to 25% of the total available computing time available over the next year on a limited amount of cycles on Frontier, as well as DOE HPC platforms at all three ASCR supercomputing facilities, including ORNL’s Summit and Theta, Argonne’s Polaris, and Perlmutter at NERSC. The program supports ASCR’s efforts to further DOE mission science, respond to national emergencies, or to broaden community access to leadership computing facilities, according to the website.

“Department of Energy supercomputers, which are ushering in the exascale era, provide world-leading scientific tools that advance U.S. science. Our supercomputers enable exploring scientific problems in new ways, safely and quickly modeling experiments that would otherwise be too dangerous, large or costly,” Barb Helland, DOE associate director for Advanced Scientific Computing Research, said in a news release. “These ALCC awards enable researchers across the nation to use our supercomputers to advance our global scientific competitiveness, accelerate clean energy options, and better understand and mitigate the impacts of climate change.”