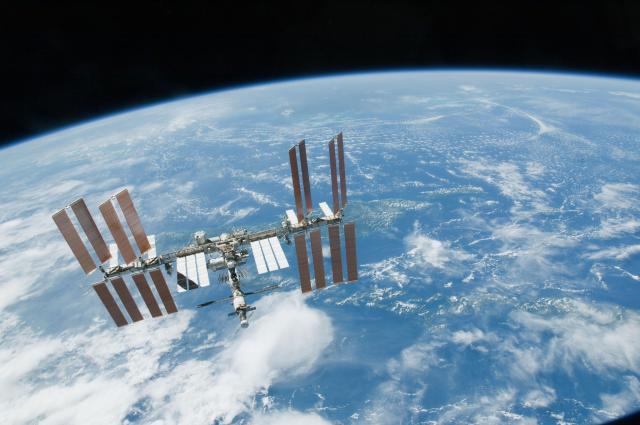 The Lawrence Livermore Microbial Detection Array (LLMDA) will be on board the International Space Station. Image courtesy of NASA.

A biological detection system developed by Lawrence Livermore National Laboratory (LLNL) scientists that has found more than a dozen applications soon will be used in tests reaching a new frontier — outer space.

The Lawrence Livermore Microbial Detection Array (LLMDA) is a versatile tool that has been employed for all kinds of studies, from analyzing the purity of infant vaccines to detecting plague in a 14th century tooth, to learning more about combat wounds from soldiers injured in Iraq and Afghanistan.

Now a team of scientists from LLNL and three NASA research centers will use the LLMDA to study microbes that are associated with astronauts and found inside the closed environment aboard the International Space Station.

"The aim of the project is to provide a survey of the microbial profiles inside the International Space Station and to evaluate the possibility of the presence of pathogens that could be harmful to the astronauts’ health," said LLNL biologist Crystal Jaing, the project’s principal investigator.

The project, called Microbial Tracking-2, is a follow-on to NASA’s Microbial Tracking-1 (MT-1) that is currently sampling and studying airborne and surface-associated populations of microorganisms aboard the International Space Station. The third and final experiment in the MT-1 series was launched to the space station on April 8 on a SpaceX cargo resupply mission.

The Livermore LLMDA technology is a DNA-based detection system that does not require the culturing of samples, compared to traditional techniques that may require days. Additionally, many bacteria have trouble growing in culture at all or require unique culture media. 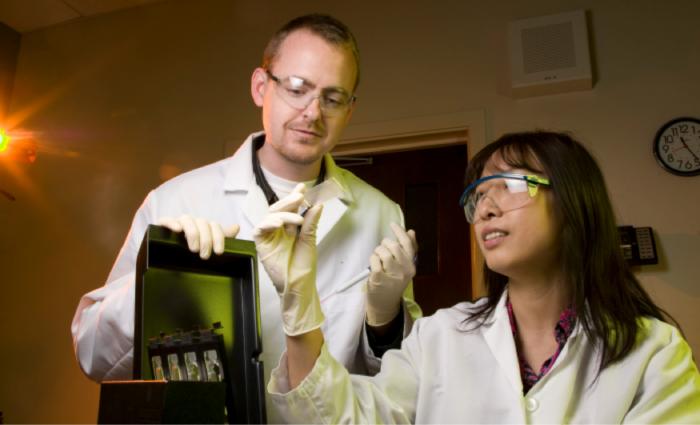 Processing samples in a day

"The LLMDA can process samples in about a day. And while traditional culturing often only covers 1 to 10 percent of the microorganisms present, the LLNL array provides about 50- to 100-fold greater coverage of microbes," Jaing said.

Kasthuri Venkateswaran, a senior research scientist at the Jet Propulsion Laboratory (JPL), sees the use of the LLMDA as a way to ensure that there aren’t microbes in the space station that could be harmful to the crew’s health.

"We can have countermeasures once we know what astronauts are breathing in and breathing out," Venkateswaran said. "Beyond the microbes affecting the crew, we need to know what’s in the environment and is riding on the cargo."

The vast majority of microbes, upward of 80 percent, are innocuous to people, while only somewhere around 10 percent to 20 percent are harmful, according to Venkateswaran.

Some bacteria look for the opportunity to cause disease, Venkateswaran said, adding that microbes that are innocuous on Earth may behave differently under the extreme environment of space.

Space can affect the presence of bacteria

Humans naturally play host to tens of billions of mainly innocuous bacteria. And one study has found that when a person enters a room, the individual adds 37 million bacteria to the air for each hour they remain there.

The LLNL and NASA research scientists anticipate gathering preflight, inflight and post-flight samples, with the preflight crew samples expected to be taken this fall and the inflight samples planned for spring 2017.

As envisioned, 18 air samples and 24 surface wipes will be taken for the space station environment and some 264 crew samples, including mouth, saliva and skin samples, will be gathered.

Previous NASA microbe studies have focused on either the crews or the environment inside the space station; this will be the first study to merge the two areas. Previous investigations of viruses in crew and the environment also have been conducted.

During the research effort, JPL researchers will receive all of the space station and crew samples for pre-processing to extract DNA and then distribute the biomolecules to LLNL and Johnson Space Center (JSC) for analysis.

JPL scientists will perform the microbiological analysis of the samples, using traditional culturing techniques and DNA sequencing to determine which microbes are alive.

LLNL’s researchers will focus on the molecular detection of microbes in the DNA samples, as well as any virulent or antibiotic resistant genes, using the LLMDA and DNA sequencing. The latter technology analyzes the genetic makeup of the DNA and the order of the material’s four bases — adenine, guanine, thymine and cytosine.

In addition to Jaing, the Livermore scientists working on the research include biologists Nicholas Be and James Thissen, computer scientist Jonathan Allen and biostatistician Kevin McLoughlin.

JSC researchers Satish Mehta and Duane Pierson will analyze the viruses in the samples and determine which viruses might be harmful to the crew.

An Ames Research Center scientist, David J. Smith, will be responsible for developing the air sampler that will be utilized for capturing microbes.

Already, LLNL scientists have been using the LLMDA and DNA sequencing to study previously collected air filter and dust samples from the International Space Station in preparation for the research.

Developed in 2008, the LLMDA permits the detection of any virus, bacteria or other microbe that has been sequenced and included among the technology’s 400,000 probes – on a one-inch wide, three-inch long glass slide – within 24 hours.

After the study is completed, NASA could potentially consider miniaturizing the LLMDA or a similar instrument to use on deep space missions with human habitation, Venkateswaran said.

"The crew could use the system before consuming food, drinking water or working in a closed area. If a crew member becomes ill, they could also use the system to help determine whether they’ve become sick through bacteria, fungi or viruses. This would enable NASA flight surgeons to administer the right kind of medicine to treat the illness."

Once the LLMDA-type system is miniaturized, the system could be deployed in remote parts of the world and in extreme environments to assist scientists, emergency first responders and public health, Venkateswaran suggested.