Model of dirty bomb debris through the city of Portland after a hypothetical radioactive car bomb explodes, based on data from LLNL's National Atmospheric Release Advisory Center. © National Geographic Channel 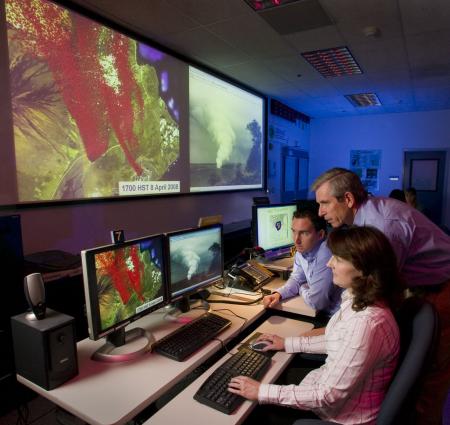 LLNL to be featured in National Geographic Channel documentary

The program, called Dirty Bomb Attack shows what happens when a U.S. city – Portland, Maine – becomes the target of a hypothetical radiological attack. Part of the network’s Naked Science series, the program will air at 7 p.m. (Pacific Standard Time) and 10 p.m. (PST) on Thursday evening.

Produced by the Maine-based Lone Wolf Documentary Group, the program starts with a dramatization of a car bomb that disperses radioactive material detonating on a busy street and moves to the question of "what happens next?"

Buddemeier also talked about the steps that could be undertaken to mitigate the consequences of a dirty bomb attack.

Page Stoutland, the director of Strategy for the Lab’s Global Security principal directorate, discussed the use of nuclear forensics to help identify the perpetrators of such a terrorist attack.

During the program, federal authorities contact the Laboratory’s National Atmospheric Release Advisory Center (NARAC) and its Interagency Modeling and Atmospheric Assessment Center (IMAAC) to obtain a model of the radiological plume’s dispersion over Portland, Maine. A team of NARAC/IMAAC atmospheric scientists and other researchers are shown modeling the dispersion of the plume.

Officials also were interviewed from several other agencies, including the FBI, the Centers for Disease Control and Prevention, the Department of Energy, the National Nuclear Security Administration and the Department of Homeland Security.