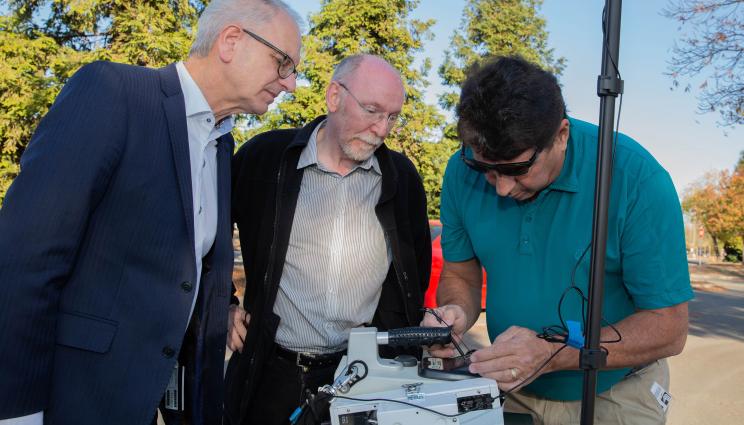 Looking over hardware for the Radiation Training Field Simulator (RaFTS) are, from left: Steven Pike and Phil Dunn, both from Argon Electronics, and LLNL’s Dave Trombino. RaFTS provides upgraded training for first responders protecting against attempts at radiological or nuclear terrorism. Photos by Julie Russell/LLNL.

Lawrence Livermore National Laboratory (LLNL) and Argon Electronics (UK) Ltd. have reached a Cooperative Research and Development Agreement (CRADA) that will facilitate the development of an ultra-realistic radiation simulator tool for first responders.

The project, which has been funded by a Department of Energy (DOE) Technology Commercialization Fund (TCF) grant, will combine LLNL's innovative Radiation Field Training Simulator (RaFTS) technology with Argon's ability to create simulation software and hardware.

RaFTS provides a first responder training solution that can be used to protect against acts of radiological or nuclear terrorism and to deal with their subsequent aftermath.

In contrast to other existing simulator training methods, the RaFTS technology produces a response within an actual radiation detector that exactly replicates all the physics of real-world usage.

The RaFTS hardware has been designed as an externally mounted device that interfaces directly with the circuitry of operational radiation detection systems.

The outputs are of sufficient quality to ensure that detection instruments behave exactly as they will against actual radioactivity, and the data that is collected offers a sufficient degree of realism to enable the energy-spectra-based identification, measurement and location of a radioactive source.

"We are delighted to have formalized our relationship with LLNL to develop, integrate and commercialize their RaFTS technology,” said Steven Pike, Argon’s CEO.

"Working in cooperation with LLNL and leading detector manufacturers, this project will provide spectroscopic instrument users with an unprecedented and lifelike exercise capability to ensure responder training is maintained at the highest level."

“If the RaFTS and Argon collaboration goes as envisioned, we will create a whole new ecosystem of training peripherals that will substantially raise the bar on emergency response preparedness,” added Steve Kreek, an LLNL nuclear chemist.

"It is exciting to see something that we have been working on for more than a decade move into the licensing and commercialization phase."

"This technology enables them to take a giant leap in the sophistication of the scenarios that they can pursue, and just as important, the attention to needs such as enhanced exercises.

"The goals of the TCF program are perfect for the commercialization stage and aims that the partners want to achieve," Meike added.

The two-year, $2.55 million RaFTS CRADA funding comprises $750,000 that comes to LLNL from the TCF grant, together with an estimated $1.8 million that will be provided through in-kind contributions from the company.

RaFTS was one of six LLNL projects that were successful in gaining funding during the latest round of TCF grants announced in July 2019.