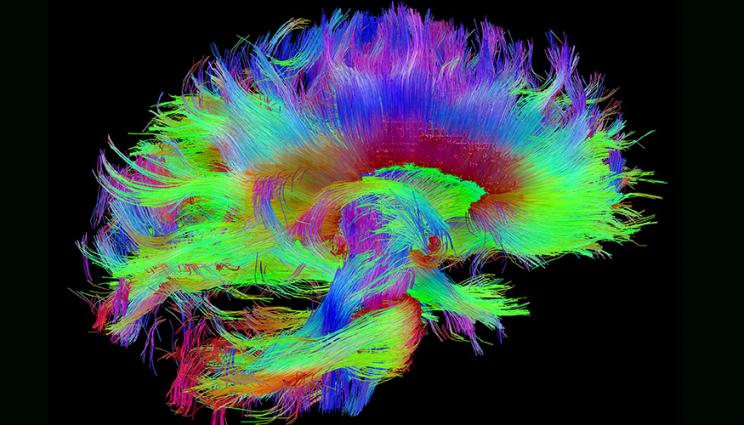 Using Department of Energy supercomputers, a Lawrence Livermore National Laboratory team and their collaborators were able to create a “connectome” -- a model of the structural connectivity of the human brain similar to this image -- from magnetic resonance imaging (MRI) data at exponentially faster speeds than possible before, giving researchers confidence that such models could someday be produced in a matter of hours and used in a clinical setting. Image courtesy of National Institutes of Health.

Since the wars in Afghanistan and Iraq began in 2001, more than 350,000 cases of traumatic brain injury (TBI) in servicemen and women have been reported to the Department of Defense (DOD). Despite several decades of failed clinical trials, there remains no acute treatment for TBI and few tools to aid clinicians in providing a prognosis for TBI patients, military or civilian.

LLNL’s involvement in the TBI research effort sprang from discussions held at the Lab in January involving several national laboratories, the Department of Veterans Affairs and UCSF. Running parallel to the TRACK-TBI project, funded primarily by the National Institutes of Health’s National Institute of Neurological Disorders and Stroke (NINDS), DOE scientists will analyze some of the largest and most complex TBI patient data collected, including advanced computed tomography (CT) and magnetic resonance imaging (MRI), proteomic and genomic biomarkers and clinical outcomes using state-of-the-art artificial intelligence (AI)-based technologies and the nation’s top supercomputing resources. These systems will be integrated into DOE’s research in science and energy and national security programs.

"Consistent with the National Research Action Plan for traumatic brain injury, this is a powerful example of leveraging the strengths and research investments of multiple federal agencies (NIH, DOE and DOD) to accelerate discovery and enhance care for those suffering from TBI," said Patrick SF Bellgowan, scientific program officer at NINDS.

UCSF’s contact principal investigator and professor of neurosurgery Geoff Manley said his team hopes the collaboration will serve as a driving force for successful analytic and technological advancements and help advance missions in both clinical and precision medicine initiatives.

"By harnessing subject matter expertise across the participating universities and labs, and using next-generation artificial intelligence-based tool development for precision diagnostics, we are optimistic that we will be able to create clinically actionable information to guide personalized treatment for TBI patients," Manley said.

LLNL engineer Shankar Sundaram, director of the Lab’s Bioengineering Center and one of the lead investigators for the Lab on TRACK-TBI, said the primary goal of the project is to bring precision diagnostics and prognostic modeling to TBI by sifting through a large and complicated dataset to form a picture of TBI that eventually can be applied in a clinical setting.

"TBI is such a complex problem that it will challenge us to improve our methods," Sundaram said. "We’ll need to be able to build suitable data infrastructure to transfer, store and provide compute access to this complex data at high speeds and efficiencies, and develop new algorithms and workflows to process multimodal data, such as images, genomic and biomarker information, together with detailed outcome assessments and learn patterns. An additional challenge is to understand how to arrive at diagnostics in the context of missing and uncertain data, and it has to be interpretable, so we can explain (to the clinician) what the model is telling them and why."

LLNL’s Deputy Associate Director for Computation Jim Brase, principal investigator on the project, said understanding the impact of a brain injury and its possible treatments will push the boundaries and capabilities of scientific machine learning at the DOE Labs, and the resulting approaches will be highly relevant to challenges in other Lab missions.

"This type of project is possible only when we bring together the new levels of computing capability available in DOE with the revolutionary new analytics being developed through machine learning," Brase said. "It takes both elements to make progress. This is one of the most difficult computing challenges we’ve ever seen."

In addition to enhancing existing capabilities within DOE’s mission space, the TRACK-TBI effort also aligns with the goals of Secretary Rick Perry, and other high-ranking DOE officials, of using advanced computing technology and capabilities at the labs in service of veterans.

"This collaboration will push the frontiers of discovery," said DOE’s Senior Adviser to the Secretary Morgan Luttrell, a retired Navy SEAL and combat veteran who served multiple tours in Iraq and Afghanistan. "We could speed up personalized treatment and improve the quality of life for veterans with significant brain injuries, as well as, develop next-generation technologies."

Using de-identified data obtained on 3,000 TBI patients and gathered from a consortium led by UCSF, a team of researchers at LLNL, LBNL and ANL will first attempt to create a streamlined system for sharing massive amounts of research data among the laboratories. Then, they’ll use that data to develop a predictive model that could be used to categorize or triage patients into risk categories and assess potential outcomes. In the long term, researchers say the project will serve as a proof of concept for a machine learning model that, if successful, could inform future models of diseases or disorders other than TBI.

"This exemplar project showcases three of the DOE national laboratories coming together to apply their computational expertise and capabilities to address a unique biological problem," said Amy Gryshuk, LLNL’s director of strategic engagements and alliance management within the Lab’s Physical & Life Sciences Directorate. "With the potential to bring in additional datasets in later years, the team will explore this opportunity and the predictive models that arise from it, attempt to apply them to additional diseases, and function as an integrated team via a secure computing environment to share data sets, perform analytics, and generate these new predictive models."

LLNL will be using the complex problem of TBI to open new frontiers in AI and data science on high-performance computing and to develop new methods of diagnostics for DOE missions, according to the Lab’s Director of Innovation Jason Paragas.

"Making sense of the brain at 100 billion neurons and 10,000 connections at the ends of each neuron is a calculation that is at the frontiers of our supercomputers and a job only the machines at the national laboratories can do," Paragas said.

LLNL’s TRACK-TBI team is addressing three focus areas, data infrastructure, the connectome – a model of the structural connectivity of the human brain – and machine learning. In March, over a period of just three weeks, the LLNL team and collaborators were able to create a connectome from MRI data. LLNL researchers demonstrated the model for Perry during his Lab visit, noting that processing the MRI using DOE supercomputers, when compared to resources available to clinicians even in the most advanced research university settings, reduced some tasks from hours to minutes, allowing researchers to envision their use in a clinical setting.

"The idea is that there could be more precise information there (MRIs, CT scans, fiber tracks etc.) that we could analyze to see if connections are weaker or broken when compared with the brain of an uninjured person," said LLNL computer scientist Peer-Timo Bremer, who worked on the connectome demonstration and is responsible for the machine learning infrastructure. "We showed how much quicker we could do this one piece of the pipeline -- essentially, we figured out a way to accelerate these processes and address one of the big bottlenecks. It needs to be faster and easier to run for clinicians to use it. Ideally, we’d want to demonstrate something that could show results within a couple of hours. We’re fairly confident we can speed it up."

Researchers said applying the machine learning approach to TRACK-TBI is essential to finding a more quantitative way to assess TBI than is currently available because of the complexity of the brain and the sheer amount of data, potentially on tens of thousands of patients, that would be impossible for humans to efficiently sort through and analyze.

"Working with data of this nature, in terms of its multimodality, size and temporal dynamics, will stress existing machine learning and computer vision methodologies," said machine learning researcher Alan Kaplan, the computer vision group leader within LLNL’s Engineering Directorate. "We will need to come up with novel approaches that push the boundaries of these fields. There just aren’t any off-the-shelf tools that are capable of aggregating such disparate data types and forming predictive trajectories."

While the data fueling the connectome demonstration came from about 500 TBI patients, neuroimaging and clinical data from thousands of more TBI patients will be available from the UCSF-led consortium later this summer. LLNL will be collaborating with LBNL and ANL on developing new data-driven analytic tools and a more efficient, encrypted data pipeline that will aim to keep any potential identifying medical information secure in adherence to HIPAA (Health Insurance Portability and Accountability Act) restrictions.

"Taking the high-performance computing systems and creating a virtual enclave for this information, segregated from the rest of the network, requires additional security controls," said LLNL scientist Kyle Halliday, who is leading the data infrastructure team. "We need to get to the point where we can share immediate results in a timely manner."

The project, which began in March, is still in its initial stages. Teams at DOE and USCF will continue working on the neural model, while scientists at LBNL (led by research scientist Kristofer Bouchard) and ANL (headed by Argonne’s Associate Laboratory Director for Computing, Environment and Life Sciences Rick Stevens) will focus on data analytics, including genetic information and CT scans of TBI patients.