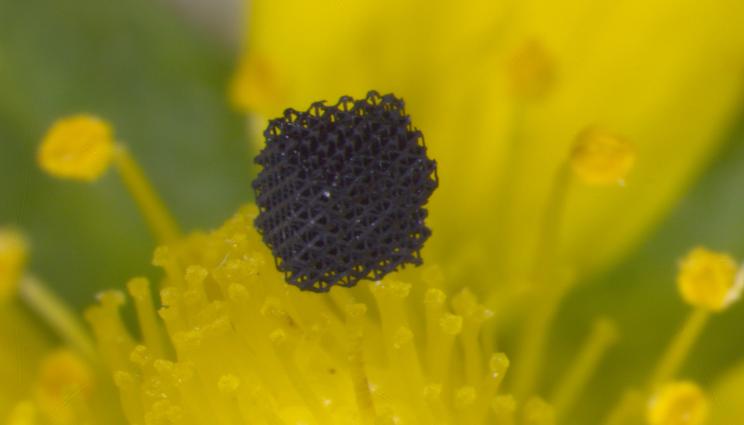 A sample of microarchitectured graphene aerogel, made from one of the lightest materials on Earth, sits atop a flower.

Graphene aerogel is lighter than air but as strong as steel, and it’s already proven useful in aerospace, energy storage and insulation. While there have been recent advances in 3D printing of the novel material, achieving complex structures has been elusive, hampering the unique material’s full potential.

To date, 3D printing of graphene aerogel has been done using direct-ink or other extrusion-based methods, where layers of graphene are squeezed through a nozzle, like toothpaste from a tube. This process has restricted design of parts printed from the ultra-low density material to simple geometries. To overcome this limitation, for two years scientists and engineers at Lawrence Livermore National Laboratory (LLNL) and Virginia Tech have focused on 3D printing graphene aerogel using light, a method known as projection micro-stereolithography.

In a paper published online Monday in Materials Horizons, a journal of the Royal Society of Chemistry, the team reported a breakthrough, producing micro-architectured 3D graphene aerogel structures with higher resolution and complexity than anything created before with other 3D printing methods. Researchers began pursuing alternative printing methods while working to optimize electrodes for flow batteries, according to LLNL principal investigator Marcus Worsley, and to reach the level of intricacy required for the project it was clear the team needed a different approach.

"In terms of resolution and complexity, we’re starting to move toward computer-based simulations and designs that aren’t simple lattices — they tend to be more complicated and have details you can’t reproduce with extrusion methods," Worsley said. "If we want to make electrodes using nonintuitive designs that a computer generates, we needed something that could do that. Stereolithography was that solution."

In projection micro-stereolithography, ultraviolet light is used to project an image of a part layer into a photosensitive liquid resin, which is cured and hardened into the shape of the image. Using this method, researchers were able to reduce the resolution in 3D graphene aerogels printed through extrusion-based methods from around 100 microns to about 10 microns. Because the performance of supercapacitors and batteries are often limited by diffusion length, Worsley said the ability to print complex structures from graphene aerogel is not only good news for battery technology, but it also opens the door to numerous applications that could benefit from computer-driven optimized design, such as aerospace, reactors, desalination plants and chemical processing.

One of the major challenges of the project was coming up with a graphene aerogel resin compatible with the micro-stereolithography process. Ryan Hensleigh, a summer intern at LLNL who is pursuing his Ph.D. at Virginia Tech in macromolecular science and engineering, said he worked on numerous chemical mixtures over a period of two years before finding the right combination.

"As this is the first demonstration of a UV-curable graphene aerogel, finding the final formulation was the most difficult part," Hensleigh said. "I was very impressed we could achieve resolutions on the order of the initial graphene oxide flake size (about 10 microns). I think exploration of battery and supercapacitors using this technique will be very exciting. No previous technique has been able to achieve arbitrary structures with graphene on the micro-scale, so exploring 3D structural effects on energy storage performance will be fascinating."

At LLNL and Virginia Tech, Hensleigh worked with his adviser and former Lab staff scientist, Xiaoyu "Rayne" Zheng, now an assistant professor in mechanical engineering at Virginia Tech. Zheng said because graphene can be printed into virtually any shape at a high resolution, the material could be utilized in a host of other applications.

"We’ve been able to show you can make a complex, 3D architecture of graphene while still preserving some of its intrinsic prime properties," Zheng said. "Usually when you try to 3D print graphene or scale up, you lose most of the lucrative mechanical properties found in its single sheet form."

Worsley said scientists and engineers at LLNL are looking to boost the surface area of 3D-printed parts and will do further research to determine precise parameters to further optimize the technology.