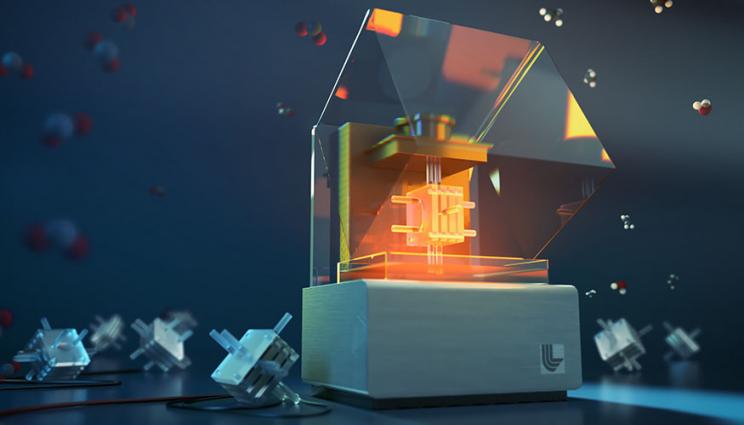 Working with Stanford University and oil and gas company Total American Services, Lawrence Livermore National Laboratory researchers and their collaborators have demonstrated that 3D printing can be used to rapidly enhance electrochemical reactors for CO2 conversion, increasing efficiency while broadening fundamental understanding of the reactions. Illustration by Veronica Chen/LLNL.

Working under a cooperative research and development agreement (CRADA) with Stanford University and oil and gas company Total American Services, LLNL researchers and their team have, for the first time, demonstrated that 3D printing can be used to rapidly enhance electrochemical reactors for CO2 conversion, increasing efficiency while broadening fundamental understanding of the reactions.

In a paper published by the journal Energy & Environmental Science, the research team proved that through 3D printing reactor components, they could produce higher yields of desirable fuels and feedstocks such as ethanol and ethylene through “vapor-fed” electrochemical systems and accelerate the process of building state-of-the-art reactors from weeks to days or hours.

“The real advantage for using 3D printing is that we can literally have an idea, design a new reactor, print it and test it within 24 hours,” said co-lead author and LLNL scientist Jeremy Feaster. “That really opened the door for us to optimize the reactor design in a way that is just not available for a lot of conventional reactors. What we’ve been able to show is that you can quickly iterate on the design and cut not only the time it takes, but also the cost to make these reactors by several orders of magnitude.”

While much of the research on electrochemical reactors in the past several decades has focused on the catalysts and materials involved in the electrochemical reactions, reactor components have been largely overlooked, researchers explained. Instead of engaging in the crowded field of catalyst discovery, the LLNL team decided to use 3D printing to explore the environment around the catalyst to find better ways to control it, according to co-principal investigator and LLNL research engineer Eric Duoss.

“The things going on in the vicinity of the catalyst and their effect on the overall reactions are understudied, so we decided that would be our niche,” Duoss said. “The community had never leveraged the power of 3D printing to accelerate this design-build-test-cycle. Our team made some really rapid discoveries working with somewhat ordinary and unexciting catalysts that people have used for a long time, and through this understanding and control of the local environment, we’ve been able to achieve record-breaking or near record properties and performance.”

Using projection micro-stereolithography and other photochemical-based 3D printing processes at LLNL, the team designed and printed new housings for the reactors and rapidly iterated to optimize the geometry of the designs, which improved overall mass transport for delivering reactants to and removing products from the catalyst surroundings. The reactors were sent to Stanford, where teams at both institutions benchmarked their performance.

Under neutral conditions, the team was able to achieve high yields of ethylene (3.67 percent) and record levels of ethanol (3.66 percent).

Researchers said the 3D-printed reactors, small enough to fit in the palm of a hand, could eventually be stacked to create an electrolyzer system the size of a refrigerator and potentially become a disruptive and commercialized technology. Such CO2 electrolyzer systems would have a significantly reduced carbon footprint (or perhaps even be a negative emissions technology) compared to many conventional chemical processes that use fossil-derived reactants. CO2 electrolyzers also may serve as a reliable source for the materials and fuels of the future, researchers added.

“Our vision is to take the best catalysts that are developed using fundamental science and create reactors that make best use of those catalysts,” said co-author and co-principal investigator Sarah Baker, who also is LLNL’s Materials for Energy and Climate Security group leader. “The work shows that catalyst performance, activity and selectivity are dictated by the whole reactor system around the catalyst. The ability to print the reactors and change features like CO2 flow path and reactor volume allowed rapid feedback to address hypotheses about reactor design impacts. We envision that this feedback also can assist in scaling the reactors, where changing scale can change performance.”

“We all know that the climate needs quick action and getting these machines up to full size is top priority,” added Roger Aines, chief scientist of LLNL’s Energy Program. “Additive manufacturing gives us a real shot at dramatically speeding up the time to commercial application.”

Beyond demonstrating that 3D printing can effectively be used to build reactors for CO2 reduction, LLNL researchers said the paper represents an opportunity to introduce a “paradigm-shifting” approach to designing future reactors and rethinking how chemical reactions are done.

Duoss, who leads LLNL’s Center for Engineered Materials and Manufacturing, said the team is continuing the work under the CRADA with Stanford and Total American Services to further push performance, optimize design through computer modeling and explore extending the lifetimes of the reactors. They want to partner with industry and 3D print other reactor components, such as electrodes, to advance state-of-the-art performance and scale up the technology.

“We’ve shown this first demonstration of what can be done with CO2 reactors, but the potential impact is much larger than that,” Duoss said. “This approach will accelerate scientific discovery and technology deployment to hopefully bridge the ‘valley of death’ and see these technologies commercialized at some point. Our climate and carbon challenges are immense, and they require these kinds of creative and disruptive solutions because we simply don’t have the time to wait.”

The work was funded by the Laboratory Directed Research and Development program and Total American Services.